Bridges Returns To The Intersection Of Software And Social Good 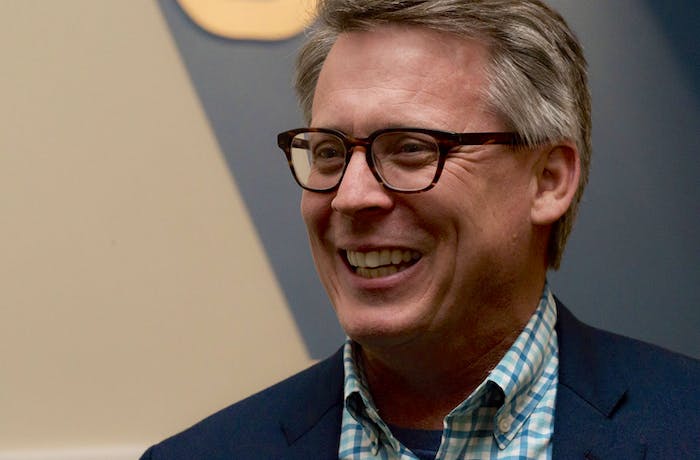 Earl Bridges is President and CEO of the Workplace Generosity division of Uncommon Giving, a financial services startup that encourages contributions to social causes. Bridges also co-stars in the new PBS series "The Good Road," which spotlights the social good that people around the world are doing. Previously, Bridges founded the startup Good Done Great, which he sold in 2017.

Back in 2009, Charleston entrepreneur, Earl Bridges, had the idea for a software platform that companies could use to spur and track employee giving.

The idea came into fruition as Good Done Great, a startup that counted 60 large corporations among its customers and more than 120 employees by 2017. That year, Good Done Great sold to competitor, YourCause. Soon after, Charleston software firm, Blackbaud, acquired the combined company for $157 million.

Bridges has since focused on a television show called "The Good Road," which airs on PBS. The show features Bridges and longtime buddy, Craig Martin, as they travel the world sharing the stories of people working to improve their communities. They hope to encourage viewers to give to such causes along the way.

Bridges is now back in the workplace-giving software space, but this time with a new platform.

In October, he joined Uncommon Giving, an Arizona-based startup that allows people to create digital wallets for philanthropic giving. Bridges came onboard as president and CEO of the company's Workplace Generosity division which he plans to grow in Charleston, SC.

"Charleston is a natural fit for the division," Bridges said, "because of its concentration of people with experience in nonprofit software."

"If you're going to start an auto manufacturing company, you do it in Detroit," he explained. "If you want to start a software company around nonprofits, you do it in very few cities. Fortunately, Charleston is one of those cities."

We sat down with Bridges (for a second time) to hear about his new company and some lessons he learned from his previous experience with Good Done Great.

You built a company in Charleston, sold it, and now you're back in the game again. What lessons did you learn the first time around?

I wish I would've started raising money faster. We thought we were going to do the slog, the long, slow roll. In a space like ours, and I would argue in almost any growing space, you'll find that competition is out there. You have to be big to be relevant. If you're really going to have a big story, then you need capital to back it.

We existed for four or five years before we started raising money at Good Done Great. That, I think, is the hardest way to do it, and I'm not sure it's the best way. Nonprofits that don't have money end up doing anything for money. Similarly, when you don't have capital as a startup, it's easy to get pulled off your strategy. Investors with real money in the game will help you keep a laser-focus on how to make a business out of what you're doing.

So, raising money early on has a lot of benefits. When I started raising money, I became better connected with the rest of the tech community. Having that network was important for me. There's an accountability to putting yourself out there visibly that I think is necessary. There are plenty of ancillary benefits that you have by not sitting in your room creating a software company, trying to explain to your wife why there's no money.

On the exit side of it, I thought we left way too early. I argued, and I could have shut it down. I could've chosen to refuse the offer because I had a large percentage of the ownership. That's probably one of my biggest regrets. YourCause sold to Blackbaud right after after that, and I was like, "Look, I knew there was a market." I believed in myself. But when you surround yourself with people that don't believe in it, or don't have as much to gain, you end up making bad decisions.

More specifically on that, myself and my co-partner at the time, David Barach, had the majority share– We had close to ninety percent of the company between the two of us. Investors and employees had the rest– They all had tiny bits. They didn't have enough skin in the game, so we were alone in that.

Getting investments early on lets other people also have a stake in the result. I learned you have to allow your employees to have real skin in the game because it allows them to realize the potential upside. That starts to push you through the tough times as you grow. It has to be harder to leave the company than it is to stay. If they could just walk out the door and not feel any pain, then you probably don't have the culture or the ownership or the stock options program that you need.

When people come in from out of town, from Boston or elsewhere, and ask, "What's hot?" or "What's going on in the tech scene?", there are only a few key places that you can really find out about where the deal flow is, and this is one of those. That gives us the platform we need as a company. I know this because that's what happened with Good Done Great.

At Good Done Great, we ended up raising about $3.2 million, but most of it was local, and a lot of it was just because we became highly visible here in Charleston. Our investors were familiar with the Charleston Digital Corridor. They liked to be able to walk in the Flagship. They were able to see the salesroom, the people doing demos, and the pipeline of big logos on the whiteboard. Investors need the ability to see something tangible.

Because of all the things I benefited from at the Flagship last time, I want to do it from Day One as opposed to, "let's see how it goes for three years."

Finally, my wife, Pam, is probably one of the reasons why we're here. I could've given up on myself, but she wouldn't let me. She always tells me, "I was your first investor. You have to make this happen."