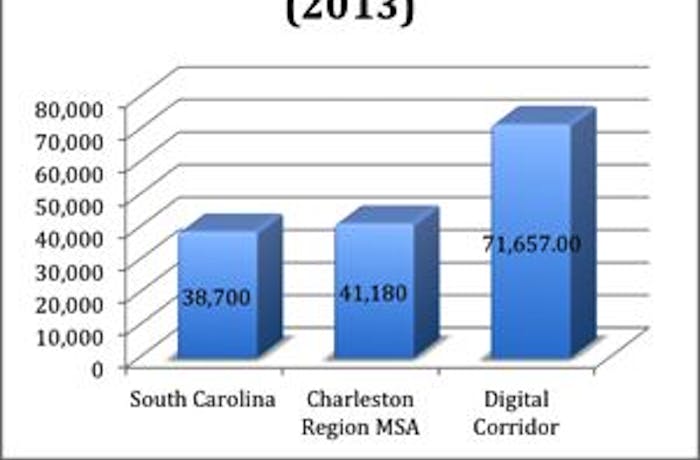 CHARLESTON, S.C. – October 25, 2013 – In its 2013 annual list of 500 fastest growing companies, Inc. Magazine named several Charleston Digital Corridor companies including BoomTown, Blue Acorn and SPARC. Another milestone for Charleston's tech economy in 2013 was the Benefitfocus IPO in September. A broader look at the technology companies in Charleston, through the Digital Corridor's 2013 Wage and Job Growth Survey, demonstrates that the strength of the tech sector is broad and robust.

The Charleston Digital Corridor is pleased to report that knowledge based companies comprising a growing portion of Charleston's economy, have posted solid results with an annual average wage of $71,657. This average wage level by companies participating in the 10th Annual Survey represents a strong 1.85 and 1.74 times State and Regional (Charleston-North Charleston-Summerville MSA) average per-capita wages, respectively.

Beyond wage levels, Charleston's tech companies are becoming a larger component of our regional workforce with 94% of the companies reporting staff increases in 2013 and 88% expecting to continue hiring in 2014. On the real estate front, 50% of the companies expect to add additional office space in 2014.

"Charleston's tech economy continues a pattern of significant strength as demonstrated by the 2013 Survey," said Digital Corridor Foundation Chairman, Kirk King. "Our sharpened focus on talent development through CODEcamp will ensure that tech companies in Charleston have the skilled workforce to grow their enterprise," he added.

"In the ten years that we have conducted this annual survey, the results are consistently positive even through the most recent recession," said Ernest Andrade, Director, Charleston Digital Corridor. "The success of Charleston's knowledge economy is the direct result of an effective and highly focused, public- private partnership," he added.

About the Charleston Digital Corridor

The Digital Corridor is a creative initiative to attract, nurture and promote Charleston's knowledge economy through a combination of technology-enabled initiatives and business incentives, private business support and member-driven programming. To learn more, visit www.charlestondigitalcorridor.com.