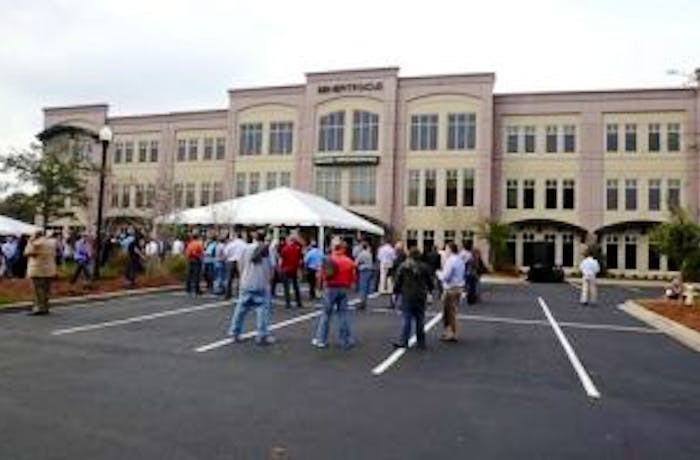 There, in the middle of Benefitfocus' second office building, sat a bright red Ducati. The $20,000 motorcycle is a permanent fixture in the local software company's new space, meant to be a reflection of what Benefitfocus does, said co-founder and CEO Shawn Jenkins.

Just as Ducati engineered its superbike to increase horsepower while decreasing weight and remaining aesthetically appealing, so has Benefitfocus designed its benefits management tools to be both high-performance and easy to use.

"That's what we do for a living," Jenkins told some guests at the office unveiling last week.

He also forecast hiring 300 people over the next two years, bringing the total headcount at Benefitfocus to more than 1,000 people by the end of 2014.

Jenkins, who wears sneakers and jeans as often as the pin-striped suit and purple tie he wore Tuesday, had all those 20-something tech recruits in mind when he picked out the office's two-wheeled centerpiece.

"What do they want to see?" the 45-year-old father of three asked, having already answered the question.

It would've been hard to see this moment a dozen years ago when Jenkins, a Florida native who got his MBA at Charleston Southern University, started Benefitfocus with Mason Holland and a few other employees of Holland's American Pensions Inc.

"This company was sort of born out of the frustration with paper," Jenkins said last week, referring to health care enrollment forms.

It also was born during lean times, Jenkins noted in an interview earlier this year. The founders of Benefitfocus incorporated just as the dot-com bubble burst.

But with the support of investors including BlueCross BlueShield of South Carolina and $2 million of their own money, they got off the ground. The plan was to be making money within three years, but it only took two, Jenkins said, and the company has been "profitable and generating cash ever since."

Goldman Sachs, the prestigious New York bank, took a stake in the company in 2007, replacing all investors not named Jenkins or Holland, and that was the last investment offer they accepted.

"We don't need any money," said Jenkins, who also doesn't like the idea of losing control of the company, even now that it has grown into "a giant beast."

Benefitfocus, the second-biggest software firm in Charleston after Blackbaud, now has customers in all 50 states and more than 60 countries. More than 300,000 employer customers, and more than 18 million people now use its software-as-a-service platform, especially this time of year: open enrollment season.

Based in the old Mount Pleasant Wal-Mart for a time, Benefitfocus moved to Daniel Island, where Jenkins and Holland had commissioned a pair of buildings, in 2006.

The plan had been to rent out the second building, Jenkins said, but it remained mostly vacant until a few months ago.

"It wasn't until this year we said we're going to take the whole thing and design it for engineering," Jenkins said.

To make it the "coolest place in all of Charleston to be a software designer," Jenkins invested in oak floors, for the authenticity factor; big glass windows, which bring in light and symbolize transparency; bottomless coffee and couches; and trophy touches like the Ducati and a couple of Fender guitars.

A high-definition theater to see the software on the big screen and review code and a big room for user interface designers on the other side of the theater are still under construction.

The idea was to create an optimal social environment for the company's creative types.

This past week's office unveiling and hiring projections are just the latest outward signs of Benefitfocus' health.

The company regularly announces new brand-name customers, such as Angie's List and Tuesday Morning, and partnerships with the likes of the Mayo Clinic.

In September, as people were starting to move into the Design + Engineering building on this coast, Benefitfocus officially opened its new San Francisco office.

The company's Greenville outpost, which has almost 90 employees and room for maybe 40 more, is also scheduled for a facilities upgrade.

"We wanted to finish this and get this under our belt," he said of the Design + Engineering building. "Greenville's next."

Jenkins said the passage of the Patient Protection and Affordable Care Act, and President Barack Obama's reelection, which solidified the law's future, represent a "big tailwind for our business."

As provisions of the law kick in over the next couple of years, employers will have to tweak their plans, explain those changes to their employees and prove to the government that they've complied.

"So all of this sort of cries out for a software to simplify it, to manage it, to communicate it, which is what we do for a living," Jenkins said.

It hasn't all been blue skies at Benefitfocus, and some questions remain.

At the beginning of this year, Jenkins told The Post and Courier he had about 700 employees and planned to add 150 in 2012. But the company only had about 630, it turns out, possibly the result of including temporary or contract employees.

Jenkins said this past week that the company had added more than 100 this year but also allowed there has been some attrition, too.

An inside sales team was cut when efforts to sign up smaller companies weren't going well earlier this year. Citing the company's success with larger customers, Jenkins said Benefitfocus' leadership decided there were better ways "to spend our resources."

"A company with 700-something people, there's always some lull of folks who either decide to move on their own or weren't a fit when we hired them," he said.

Just how many millions Benefitfocus has in "resources" is among the major mysteries at this point.

In 2006, Jenkins said Benefitfocus hoped to generate $1 billion in annual revenue within the next decade. At the time, Ed Sellers, then-CEO of BlueCross BlueShield of South Carolina, called that target "a big number" for a company that raked in about $30 million in 2005 but said it wasn't impossible either.

This past week, Jenkins confirmed the company is still profitable but declined to reveal any of the company's financial figures.

"One of the beautiful things of not being public is you don't have to put numbers out there," he said.

In January, the firm hired tech finance veteran Milt Alpern as its latest chief financial officer, a move, combined with the recovering economy and Jenkins' appearances at the annual health care conference put on by investment bank Piper Jaffray, that got people thinking the company would finally go public or sell. But that hasn't happened.

Paul Meeks, a financial analyst who focuses on technology companies, said Benefitfocus appears to be "a vibrant company," but he does wonder.

"Since March of '09, stocks have done pretty well. They have had, let's call it, three years of opportunity ... to go public," said Meeks, who left Daniel Island to became director of institutional investing at Washington-based Saturna Capital in the spring. "So I'm wondering, is the problem with management? Is the problem with the financials aren't as good as you might think?"

Jenkins tamped down that talk, saying "we don't have any sort of published schedule."

"The good news is a lot of people are interested in our growth and our growing company," he said. "And I think when things go well, as they are with Benefitfocus, a lot of continued opportunities open up. But anything would be just speculation by anybody other than us."

Instead, Jenkins seems focused on organically growing the "largest benefits technology provider in the U.S."

He said it earlier this year and he repeated it this past week: "We really feel like we're just getting started."