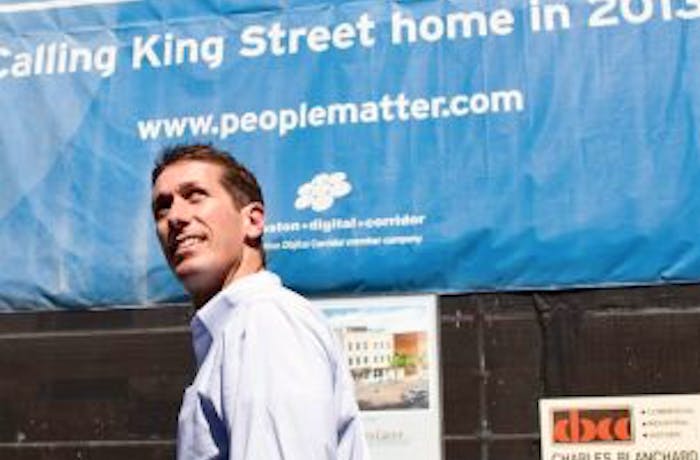 Nate DaPore stands in the epicenter of his building, PeopleMatter's new HQ under construction on King Street. Smoothie in hand, Jamiroquai's "Dynamite" pulsating from his iPod, this tech visionary is a storm of controlled energy and he's going to sweep you along for the ride. Some people just operate in another gear entirely and he's one of them. It's reminiscent of motivational speaker Tony Robbins or the intense focus of Tom Cruise. Drive. Passion. Vision. The impression is immediate and powerful. And he's a damn snappy dresser, sporting Italian leather loafers amidst the dust and debris. He looks ready for cocktails and that's exactly where we're headed, but first a building tour....

No detail escapes Nate's attention. From repointing the historic brick exterior and installing lighting and paint colors engineered to reduce eye strain for computer programmers to the inventive Herman Miller furniture (long benches instead of cubicles), everything is designed to maximize the human experience. Which is what his software business is about as well: changing how employers and employees interact in the workplace and making it better through communications and engagement. And he's passionate about it.

"PeopleMatter offers one of the most incredible experiences of your life," he says. "It challenges and rewards you personally and professionally. It's for people who want to have meaning and freedom in their work. When you walk into our building, you feel it."

Now let's get to the good stuff...

ANY GUILTY PLEASURES LIKE HONEY BOO BOO OR THE KARDASHIANS? Nope. This man has never even watched an episode of American Idol.

FAVORITE '80S MOVIES: ET and The Hunt for Red October.

"I'm fascinated by naval warfare and its parallels with what we do. Being constantly innovative, staying ahead of the competition and keeping them in the rear view mirror," he says.

FINAL QUESTION: IF THE MAYANS WERE RIGHT AND THE WORLD ENDS DECEMBER 2012, WHAT HAVE YOU LEFT BEHIND? WHAT'S YOUR LEGACY?

"I changed a lot of lives and I made a lot of people smile. I gave them opportunities that they didn't think they had, aspirations they didn't know they could achieve.... I'm a witty sonova bitch and I try to have fun."

As we power up four flights to emerge on the rooftop deck, I am struck by Nate's cult of personality. Think Steve Jobs, Jeff Bezos, the Google titans. This man is drinking the same Kool-Aid and already cultivating and espousing a clearly defined brand. One he thinks deeply about.

A question about corporate culture, for example, leads to a psychological discussion of Maslow's Hierarchy of Needs and how it can be applied to influence culture and motivate productivity.

"The teammates that I serve with have a purpose," he says. "An environment that is intellectually stimulating and creative fosters innovation. We offer a place that is hip, fun and inspiring and people enjoy coming to work."

And then he shows me where the wet bar and entertainment stage will be installed.

We've just toured the 15,000 square feet of Phase One, to be completed in 2013. Planning is already underway for Phase Two's additional 45,000 square feet in 2014. Clearly software/IT is a growth business, which is why Nate dubbed Charleston "Silicon Harbor."

As we settle in across the street at The Macintosh, Hendrick's gin and cucumber in hand (never a lime, mind you), I ask him if he really coined that expression.

He grins, nods and replies, "We've got the beginnings of a really special tech community and we've got to brand it. I spend a ton of time in Silicon Valley... So what can we be? Well, Charleston's got a big ass harbor..."

Indeed we do. But what sets Charleston apart? According to Nate, a Charlestonian who's been a part of the local tech set for the past 12 years, it's that we're "tight knit. Everyone works together to better the IT community."

Okay, so why the lightning in a bottle? Why did Inc. Magazine suddenly recognize three software companies in its "500 | 5000 Fastest Growing List" in the same year Fast Company began to pick up on Silicon Harbor?

Nate's take is that it is our quality of place and that organizations like the Charleston Digital Corridor, the Charleston Regional Development Alliance and the Charleston CVB are doing a better job of marketing it. "It's like cell division," he says. "Once you form the core nucleus, the growth is exponential. Charleston has all the ingredients and as long as it continues to embrace them, the tech community will continue to thrive."

Our biggest competition? Atlanta, Austin and Raleigh. The biggest inhibitor to our growth? The need to graduate our own talent. "Charleston's IT/software community could hire 200 people a year, but local schools have got to invest in and expand their computer science programs."

So I ask the obvious question: Why stay in Charleston? He doesn't hesitate: "This is my home, this is where I plan to be and to stay."

As we look back on 2012, I can't help but wonder if we're witnessing the ascendance of not just Charleston's tech giants, but also the nation's nextgen tech leaders. It seems all the more imperative to get to know the man. What influences and inspires him? For all Nate's deep analysis and strategy, does he give himself to anything frivolous? Is it possible for a journalist to crack the surface of his cultivated brand and key messages to get to what lies underneath?

We begin at the beginning. Nate grew up in peninsular Charleston on Bull Street, attending school at Mason Prep and Bishop England. He credits his dad for his perseverance and his pharmacist mother for his entrepreneurship and drive. An avid pilot since 13, Nate inherited a love of flying from his father and grandfather, both pilots. Kiteboarding, boating and offshore fishing – anything on the water is his playground.