Charleston CODEcamp, Off To A Good Start, Looks To Keep Up Next Year 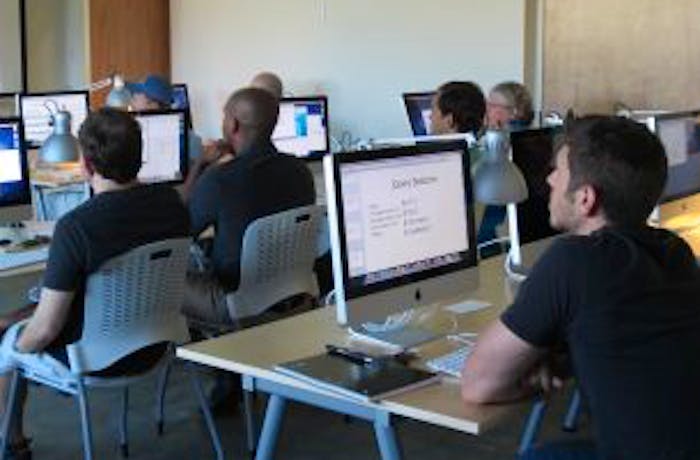 Stephen Wyatt has had a tough few years.

His master's degree in sports marketing didn't yield work in that field, and after a stint in the beer business, Wyatt decided it was time for a career change. He turned his professional focus to the booming world of web development

But the recession was in full swing, and despite having some basic design skills, he found himself scrambling to get a foothold.

"I was one of those people that you see on '60 Minutes,' that couldn't find jobs," Wyatt said.

So when the 37-year-old Mount Pleasant resident heard the Charleston Digital Corridor was launching CODEcamp, a set of courses offering practical training in computer programming, he called Corridor Director Ernest Andrade and signed up. That was this past spring.

Over the summer, Wyatt absorbed enough jQuery from his CODEcamp class that his instructor, Tom Wilson, president and lead technologist of fast-growing Jack Russell Software, hired him on as a paid apprentice.

During his three-month stint, Wyatt also took a one-day introduction to Ruby on Rails, a web application framework, taught and sponsored by Wilson.

"What we're doing here was a lot of the stuff we were doing in class," Wyatt said at Jack Russell's crowded offices off West Coleman Boulevard in Mount Pleasant.

Wyatt is one of 75 students who have taken a total of 86 courses at CODEcamp since it began in May. (This reporter is another –- see sidebar.)

Pitched as "augmentative" education, the program is meant to bridge the gap between Charleston software firms looking to hire and local people who need the training to be able to do those jobs. The idea is to both expand and enhance the metro area's tech talent pool, Andrade explained, and the courses are based on demand.

"It is the purest form of market-driven education that you can get," he said.

While websites like Codecademy help people learn how to code, having experts from local companies teach ongoing classes in a partially public facility makes CODEcamp unique, according to Andrade.

"I'm not aware of anything like this being done around the country," he said. "We are using our community to further our goals and objectives."

Many other cities have hosted "Code Camps," but they are more like conferences than courses with curricula. Peter Kellner, a software developer and consultant who has helped organize the Silicon Valley event by that name, wasn't aware of Charleston's version.

"It sounds like a great idea," Kellner said, though he believes calling it CODEcamp could confuse outsiders. He said the concept would not work in California.

In Charleston, the community college seems to welcome CODEcamp.

Trident Technical College instructor Tom Brady and a handful of students, including one who was just hired at a Corridor member company, attended the Javascript boot camp Wilson taught earlier this month.

"It does overlap in that we teach students programming here," Brady said, "but what they do down at the Digital Corridor is someone learns a new technology and, bang, they make a course out of it. And we're just not agile enough to do that."

Chris Starr, the chairman of the computer science department at the College of Charleston, has also endorsed the program as supplementary to the theory students learn at the college.

In keeping with the quickly evolving world of web programming, CODEcamp has morphed markedly in just its first several months in existence.

In addition to the jQuery class Wyatt took, the inaugural CODEcamp also offered two other classes, including iOS, which runs mobile apps on the iPhone.

The initial cost per person per class was $500, and the classes ran for 12 weeks in the new computer lab at the Corridor's Flagship business incubator near Calhoun and East Bay streets.

After receiving feedback from the inaugural course, Andrade and Wilson, CODEcamp's head of instruction, shortened the courses to four 2.5-hour classes held over four weekday evenings and costing $250.

Approximately 85 percent of enrollees were already employed and looking to enhance their skills, according to Corridor data. Students have ranged from a plastics researcher to an architect and an IT director at a local foundation.

A handful of students, like Wyatt, have parlayed their participation in CODEcamp into short-term jobs using their new skills. Brian Nations, who took Joe Bryan's Website Basics class over the summer, now works at Bryan's e-commerce software company, sineLabs, which is based in the Flagship.

In addition to Wilson, other Jack Russell employees have taught and will be teaching classes. And Ben Cates, a recent hire at Jack Russell, took the Ruby on Rails boot camp taught and sponsored by Wilson, while at least one recent hire took a CODEcamp class to broaden his programming knowledge.

"It's a great resource to have," Cates, a 28-year-old Vanderbilt computer science graduate, said of CODEcamp. "Even those of us who do have degrees ... in practice, it's mostly a self-taught profession still."

Andrade views CODEcamp as a year-round technical training program, and the course schedules for the third session, beginning in January, are already on the site. New offerings under the continuing one-month format include Clojure, another programming language, and Amazon's Elastic Computer Cloud.

"You keep iterating to see where people are, to see what's attractive to folks," Andrade said.

The one-day boot camps will also continue. Wilson will be teaching another one-day class, this time on HTML5.

"That's really sort of the toe-in-the-water sort of thing," he explained. "Should I take this deep dive or not? Then the monthly courses are like I really want to spend more time learning this thing."

Andrade has plans to make the courses available online and to incorporate the participating companies and aspiring programmers into the Corridor's talent portal for hiring companies and jobseekers.

The CODEcamp experience also has Andrade thinking about launching a similar practical curriculum for business early next year, something he's calling Bizcamp.

"It's just the logical thing to do," he said. Courses would cover topics like intellectual property law, marketing and search engine optimization, and finance.

Meanwhile, Wyatt is also contemplating his future. His wife is more than five months pregnant, and his apprenticeship finishes Dec. 4.

Even if Jack Russell Software is not ready to take him on full time, he said his outlook is brighter thanks to CODEcamp and the resulting apprenticeship.

"Just having this on my resume, I get calls from that fact," he said

How One "Camper" Moved Out of Comfort Zone - Brendan Kearney

My CODEcamp story begins, necessarily, with a confession.

I cover technology for The Post and Courier, but I'm still very much a newbie to the world of programming. Before I started this job last year, I had never heard of most of the languages taught at CODEcamp or used daily by coders at Charleston's software firms.

I'd tooled with a minimal amount of HTML to contribute to a newspaper blog, but before last month, my most sustained or substantial programming experience was Basic and Logo in middle school.

So I enrolled in CODEcamp's Website Basics course last month to try to get up to speed.

Well, as I told Joe Bryan, the instructor of our roughly eight-person class, at the end of the first night, the experience was humbling. Or to borrow fellow instructor Tom Wilson's characterization, it was a bit like learning a foreign language at an advanced age.

The pace of instruction was brisk, and we had moved past my practical knowledge base in the first hour. Of course, that was to be expected, given the nature and purpose of CODEcamp.

A brief history of computing quickly segued into the ins and outs of HTML (HyperText Markup Language). Nest tags, don't overlap them, I learned. Use HTML only to describe content; use CSS (Cascading Style Sheets) to decorate it, Bryan emphasized.

In subsequent classes, chunks of which I missed thanks to my day job, Bryan dug deeper into the universe of tags and CSS syntax and layout.

He explained how much the process of creating content for the web has been streamlined over the years. But it was clear we needed to learn the basics even as almost any code you'd ever need is already out there in the open, waiting to be copied and pasted.

By the fourth class, Bryan was already talking about that latest capabilities of CSS3 and offering a hint at jQuery, which enables more dynamic webpages. And I was officially out of my depth.

But I'd gotten both what I'd paid for and what I'd put into it. I understand more about how websites are built now than I did, and with another run through the course materials and the suggested free web resources, I might one day build my own.