Building Bridges to a Life?s Career 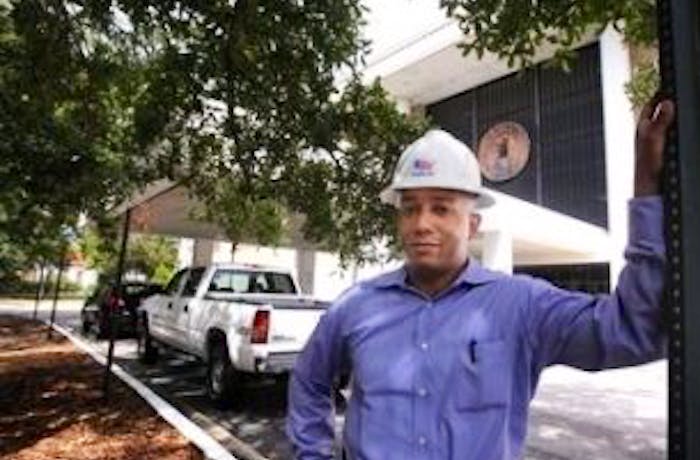 "I was deathly afraid of bridges as a little kid," Canty acknowledged recently.

But by the time he was 7, he had turned his phobia into the seed of a career. Or, in Canty's words, he "switched," developing a fascination with the infrastructure he once feared.

He has since worked on two of the most prominent bridge projects on the East Coast, one of which is especially familiar to Charlestonians.

Now 38, he owns a growing construction company with a record of work from South Carolina to Florida and big plans for the future, including, not surprisingly, another big bridge project.

"People kept telling me I couldn't do it, so I decided to prove them wrong," he said.

The ninth of 11 children growing up in Boston, Canty studied civil engineering at the University of Massachusetts before returning to his hometown for the so-called Big Dig project.

The project was infamous for its cost overruns and late completion date, but in addition to extensive tunneling, the rerouting of Interstate 93 under the city included the construction of the world's widest cable-stayed bridge, the iconic Leonard P. Zakim Bunker Hill Memorial Bridge over the Charles River.

It was the construction of the second-longest cable-stayed bridge in the United States, the Arthur Ravenel Jr. Bridge over the Cooper River, that brought Canty back to his World War II veteran father's home state of South Carolina.

Beginning in the fall of 2002 as a field engineer, he was in charge of crews working on the ramps where the bridge touched down in Charleston and Mount Pleasant.

When the $632 million project was finished in 2005, he transferred to managing the demolition of the bridges that the Ravenel replaced.

Canty, who keeps a scrapbook of bridge postcards, remembers looking down from the new bridge as the foundations of the old Silas N. Pearman Bridge were blasted away with TNT.

It felt like "100 trucks going by at that moment," he recalled.

"The bridge was actually undulating," Canty said. "That's what it's supposed to do."

"If there were an earthquake, I'd go tie myself to that bridge," he said, "because that bridge is not going anywhere."

After that thrill ride, managing the half-cent sales tax construction projects for Charleston County didn't quite measure up. He left after 14 months in June 2008 to buy a majority share in Freeland Construction Co., a small renovation and mechanical construction firm in town.

"I wanted to be in charge of my own destiny," Canty said.

He also saw the future demand to rebuild America's infrastructure and to provide for his children. "I needed to make more money, to be quite honest with you," Canty said.

He immediately set to taking Freeland, named in the wake of 9/11, to the next level. The most important step was to be certified by the U.S. Small Business Administration as an "8(a)" minority business. Freeland finally gained entry into that nine-year business development and mentorship program on Sept. 2, 2009, Canty said.

"That was a big deal," he said. "We got our first contract within three hours."

And that pipeline has continued since: Canty estimates 85 percent of Freeland's work has been for the federal government.

There have been jobs for the Navy from Key West to Charleston and for the National Park Service and the General Services Administration in South Carolina and Georgia.

One of Freeland's only private projects has been the $800,000 truck inspection station completed last year at the Boeing South Carolina campus in North Charleston, which sits just behind the trees off South Aviation Avenue.

Freeland has just finished work on an osprey nesting platform at Parris Island and is renovating the J. Bratton Davis United States Bankruptcy Courthouse in Columbia, "a place I never hope to go except for work," Canty said.

Next up is the $142 million Gaillard Auditorium renovation, for which Freeland will begin work as construction manager Sept. 1.

Canty's company also just won a project at the Bethesda Naval Hospital and will open a satellite office in nearby Bowie, Md., next month.

Canty's biggest prospect is a piece of an estimated $2.5 billion bridge and tunnel project in Louisville, Ky. Freeland could be a subcontractor under a pending bid from a joint venture composed of Ravenel Bridge partners Skanska and Flatiron, and Dragados, the company that is Freeland's mentor under the 8(a) program.

It's all part of Canty's growth plan, to expand Freeland into a major general contractor.

There's a long way to go, but Freeland has covered significant ground already. When Canty bought in, the company had four people operating out of home offices. He moved the team into Charleston's Flagship incubator in late 2010, but as the company grew to 15 employees, Freeland needed more space.

The company moved its headquarters to a new building in the Neck Area last month.

On a recent Friday morning, three Freelanders sat at desks in a mostly open, yellow-walled room, with future projects to bid on sketched out on a whiteboard and Bankers boxes from the Boeing project on a shelf in the corner.

Canty's office was still a work in progress, with a cardboard cutout from a minority small business award he won last year leaning against the wall and his Phi Beta Sigma fraternity coat hanging on the back of the door.

Meeting Street Road was rough not too long ago, Canty explained, but he thought the stretch north of downtown matched his up-and-coming company. There was also a personal reason for the real estate pick.

"I wanted to be somewhere I could see the bridge," he said.

Ken Canty expanded from his orignal offices at Flagship to larger quaters in the Neck Area of Charleston. (Brad Nettles/postandcourier.com) 8/7/12