From a Tiny Blue Acorn, a Company Grows 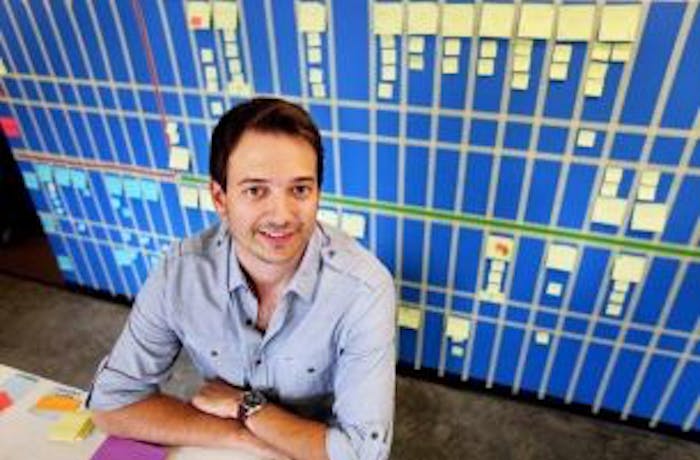 Kevin Eichelberger learned two main lessons from his first bid as an e-commerce entrepreneur, a beer- and liquor-branded clothing and accessories website called Boozin' Gear he launched with his younger brother Jeff and their combined $5,000 in 2004.

The other was, after receiving years of e-commerce software pitches that were lacking, Eichelberger realized he could do it better; he could help small-to-medium-sized companies like Boozin' Gear sell their stuff online.

"Through that experience, I thought I was ready to move on to the next chapter of my life," Eichelberger said from his Rutledge Avenue office.

So he turned the reins of Boozin' Gear over to Jeff, quit his day job as a software consultant and started Blue Acorn –- with his own money and only a few contractors helping out. That was April 2008.

"I did not take that decision lightly," he said, calling leaving his "pretty high-paying" Microsoft CRM implementation job a "very risky maneuver."

After he and his wife Meghan decided they didn't want to raise a family in Atlanta, they moved that October to Charleston where years earlier Eichelberger had been offered a job at both Blackbaud and Benefitfocus.

Some four years later, Eichelberger is no longer a one-man band. He leads a 34-member company that he said tripled in revenue and almost tripled in head count last year.

Eichelberger, 33, still remembers eating pizza on the floor and opening beers on the doorknob of Blue Acorn's first office in Mount Pleasant with his first hire, Ben Marks. Now he and Marks not only have tables on which to eat but also an office beer fridge.

Growing up in Buffalo, N.Y., Eichelberger studied computers in high school and added business training in college. But even with those two marketable specialties, it was tough to get a job upon graduation in December 2001.

"The summer before I graduated, the sky was the limit," Eichelberger recalled. "The winter I graduated, it was down in the dumps."

So he moved to Atlanta and worked restaurant and web developer jobs to get by. He eventually got settled, but that's when he noticed online retail growing and felt the entrepreneurial itch. He thought Blue Acorn could ride that rising tide.

(The company name, which was derived from the Eichelberger family crest, combines the blue of technology companies, with the symbolic potential of the acorn, which is what eichel means in German.)

Eichelberger's team helps companies' in-house IT teams improve the user experience on their websites and sell more units –- or "conversion optimization" in the lingo.

Blue Acorn started small but has worked its way up.

"We had to really build upstream," Eichelberger said of his business. "We had to start with mom-and-pops. We started off with start-ups."

Now Blue Acorn's clients are more mid-tier, companies with an established brand and, at $5 million to $50 million in online revenue, money to pay for an upgrade. They include Mori, the luggage and gifts retailer; DJO Global, which makes orthopedic products; Speck Products, which makes Apple accessories; and high-end tableware retailer Reed and Barton, whose website won an award this year from Magento, a popular software platform Blue Acorn often uses.

Eichelberger said he uses a "very quick test" to determine the effectiveness of an e-commerce website: roll back from the computer screen, squint, and "if nothing stands out to you, the site is probably poorly designed."

"What should stand out is the hero shot of the product, the 'Add to cart' button and maybe another feature or two," Eichelberger said.

As e-commerce is still relatively new, Eichelberger said Blue Acorn has had more business than it can handle.

"We are turning more work down than is turning us down," he said, adding the company's ratio of existing clients to new clients is "about 80/20." Those companies count on Blue Acorn to keep up with the rapidly changing online retail, or "couch commerce," industry, which has been rocked by the rise of mobile and Pinterest recently.

Eichelberger said Blue Acorn prides itself on being a full-service shop, doing 99 percent of the work in-house.

"We're not just a development team. We're not a Magento development company. We're an e-commerce agency," he said, meaning Blue Acorn does off-site marketing in addition to optimizing the client's website.

While the company has grown, so has Eichelberger's profile in the Charleston tech community. Last month, he took a seat on the Charleston Digital Corridor's seven-member board of directors along with other area tech CEOs.

In April, Eichelberger challenged his employees to have 25 Blue Acorn entrants in the CDC's i5k charity run through downtown. He told them if they reached that threshold, he would run the race, his first 5k, in an inflatable squirrel suit.

"I was out of energy a minute into it," Eichelberger confessed.

But during the after-party at the Maritime Center, Eichelberger regained his wind and, still in costume, participated in a dance-off to determine which company would win the race's spirit award. (He lost to Brian Baumgartner of Boomtown, Blue Acorn's Rutledge Avenue neighbor.)

Maintaining high morale is important, Eichelberger explained, in keeping with a prevailing emphasis on good "culture" in tech companies, including many in Charleston.

"I've worked at some pretty crappy jobs over the course of my career and I don't feel like anyone deserves that," he said.

As for future growth, Blue Acorn now has more room for it. On a recent afternoon, contractors were trying to turn the power on in the new 1,800-square-foot section of the office, which gives Blue Acorn 50 percent more room in which to operate.

But Eichelberger wouldn't promise a hiring rush. It'll be an organic maturation process, he said.

In other words, Blue Acorn is not ready to become a towering oak yet.

"We're all learning and growing together," he said.

And maybe having a beer and a dress-up session every now and again.