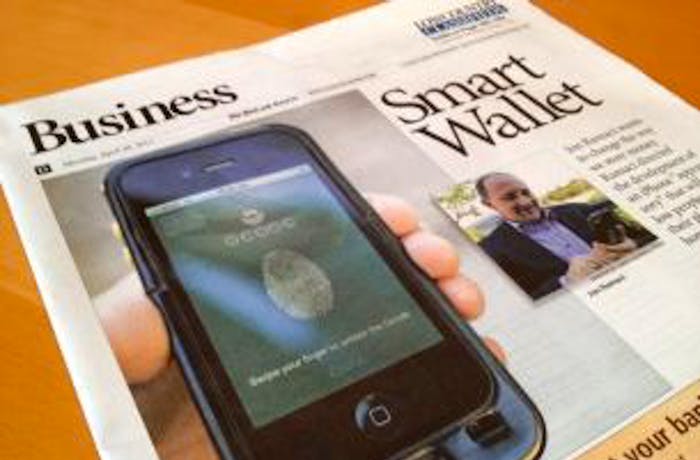 Remember that "Seinfeld" TV episode where George Costanza's wallet is so thick with cards and receipts that it gives him back problems and eventually explodes on a New York City street corner?

Jon Ramaci does. And he wants to take that bothersome bulge out of your billfold, in the meantime transforming the way we store and spend money.

For the past four-odd years, the Citadel graduate and Isle of Palms resident has directed the development of theGeode, an iPhone "appcessory" that will allow people to leave all their plastic cards at home.

"It's getting rid of the Costanza wallet," Ramaci said.

The sleek contraption, which will sell for $199, fits around the iPhone like a hard protective case and features a programmable barcode and magnetic-stripe card, accessible only by a fingerprint scanner. Ramaci says it's the first "intelligent" case for Apple's do-it-all phone and the first mobile wallet to come to market.

The first production batch of Geodes will be manufactured in Lexington, Ky., in May, and the device will be officially launched June 2 in San Francisco in conjunction with a rock concert called BFD.

Ramaci, 47, wouldn't say what BFD stands for, but in hoping the Geode does "for the wallet what the iPhone did for music," while making personal and consumer finance more secure, it's safe to say he thinks his device is also a big deal.

The Geode's most visible features are the "DoD-level biometric security" in the form of the finger swiper, the universal card in the back sleeve and the e-ink barcode screen on the sleeve.

The phone has a micro USB port for reading magnetic-stripe cards either for upload or for payment. To add a barcode card to the Geode, the user holds the iPhone's camera over the card "and it grabs it," Ramaci explained as he demonstrated earlier this month.

Once programmed, the user just picks which card he wants the barcode screen or universal card to be, and scans or swipes.Participating merchants will be able to send gift cards to Geodes, based on users' preferences and their proximity to stores."The set-up is really simple but it's super secure and super convenient," he said.

Quick pivots
A soft-spoken Plymouth, Mass., native, Ramaci came South for his techy training –- and some discipline –- at The Citadel. After serving four years in the Army in Alaska, Ramaci decided, "I've had enough of the snow" and made another life pivot.

He returned to the Bay State to do research and development database work for Duracell, then worked for software giant Oracle before striking out on his own.

Ramaci wouldn't say for how much, only that "it was a nice sale." He said the company is still operating unlike many of its dot-com contemporaries.

Restrained from working in the managed service provider field by a two-year noncompete agreement but liberated by his new financial freedom, Ramaci enrolled in a master's program in complex software systems at the Massachusetts Institute of Technology.

After MIT, he worked at a couple of managed service providers before taking a year off and then starting iCache in 2007, the same year he moved back to Charleston.

Going mobile
The iCache team has been tinkering with the Geode for years, originally considering it separate from a phone and talking to Microsoft, before joining up with Apple about a year and a half ago, Ramaci said. He was at Apple's headquarters in Cupertino, Calif., last week.

Ramaci won't talk much about iCache's business arrangements with the company that made that initial lowercase "i" famous. The consumer electronics giant helped iCache with the Geode's design, taking it from a stand-alone wallet to a glove to the iPhone's hand, Ramaci said, but a nondisclosure agreement prevents him from saying much more.

It's been during that 18 months that the process has really "heated up," Ramaci said, noting the advent of Google Wallet."This whole space of mobile payments, mobile transactions is really heating up," Ramaci said.

Google Wallet, which allows users to upload their credit and loyalty cards into an app and redeem their value through what's called near field communication, launched last year. But for consumers to be able to simply tap their phones to buy something, Google Wallet requires merchants to have their own specially equipped cash register. "The beauty of the Geode is we're using the existing infrastructure that's out there, Ramaci said.

Lifestyle choice
Self-funded initially, Ramaci has since taken on about 35 high-net-worth individuals as investors, which he described as a "much better way to manage the ownership of the company" than to "liquidate out" to a venture capital firm. Each of iCache's roughly 20 employees has an equity stake in the company, Ramaci said.

The company also launched a campaign on the popular crowdfunding website Kickstarter in mid-March to raise money for and gauge interest in the Geode.

"We used it really to see if there was demand for our product," Ramaci said.

It will then sell the Geode through "retail and online channels" such as iCache.com, Ramaci said.

The company has been based in Cambridge, Mass., where its 12-member engineering team occupies an office near MIT. But Ramaci plans to grow the company headquarters in Charleston.

The business shares a modest third-floor space on King Street with Slant Media, a marketing and design firm. But the company is "actively looking" for new office space either downtown or in Mount Pleasant, and the local contingent will grow from five to 40 by the end of the year, Ramaci said.

Basing the company here was, in part, a "lifestyle choice," Ramaci said, but the climate and proximity to his alma mater weren't the only reasons that iCache is in Charleston.

The company is proud of its "Made in the USA" product but that doesn't mean Ramaci isn't eyeing growth beyond America. It has a three-person office in the Persian Gulf emirate of Dubai that will serve customers from Saudi Arabia to Turkey.

"There's a huge demand for consumer products like this" in the Middle East, Ramaci said, perhaps bigger than the U.S.

Four years is a long time for a tech company to take developing its only product with no revenues coming in yet. And Ramaci conceded "some days that are more stressful than others." But it's "all how you look at it and handle it," he said. "Keep your eyes open and on the goal and work through the details."