Forget NFC, This iPhone Case Combines All Your Credit Cards Into One 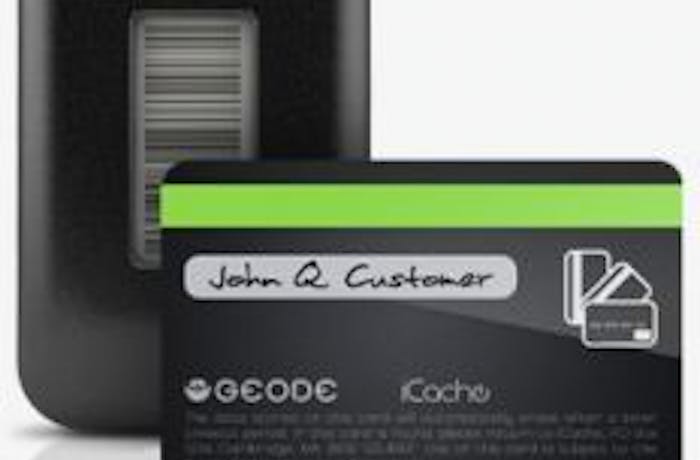 I have a love-hate relationship when it comes to all these newfangled mobile payment methods. Fan as I am of Google Wallet (and all the Wawa coffee I bought with the included $10 prepaid card), I can't help but want something more immediate, something more widely-usable.

The big sticking point that comes with the NFC-based payment systems that companies like Google and Visa love with is they require buy-in from the people and companies you actually want to buy from. When your favorite mom-and-pop store can't be bothered to jump on the NFC bandwagon though, well, that's just a bummer.

And that's where the truly awesomeiCache Geode comes into play.

In short, the Geode is a (rather handsome) iPhone case that lets you replace all of the loyalty and credit cards tucked away in your wallet in one fell swoop. Once you create an account in the companion app and load up some info, the Geode can display the barcode of any saved loyalty card on the small e-ink display on its rear end.

That by itself is pretty dang useful, but what really gets me is the rewritable card mounted just above it. Once your credit card information has been registered with the Geode, the included Geocard's mag strip can be rewritten on the fly, effectively turning it into whichever credit card you want it to be.

The fingerprint scanner along the case's bottom lip, as you may have already guessed, is there to make sure no one is getting into your account with your express consent. iCache founder and CEO Jon Ramaci tells me that the scanner uses Live Finger Detection, so gruesome tricks like cutting off someone's finger for access won't fly.

I'll admit that I've lost my wallet more than a few times (only to find it in the another pair of pants or something, naturally), and the ordeal of digging up customer service numbers, cancelling cards, and waiting to get replacements in the mail is an unmitigated pain in the ass. iCache also aims to simplify that process by leaps and bounds for Geode users allowing them to store their encrypted payment information securely in the cloud. From there, it's a matter of going to a store and buying a new Geode (Ramaci tells me that more than a few companies have expressed interest in carrying the Geode), or ordering another from the Geode website. One quick re-authentification later and you're back in business.

Interestingly, the Geode you see here isn't exactly the Geode that Oracle alum Ramaci and his team set out to create 3 years ago. Way back when, they wanted to create a standalone digital wallet, but eventually axed the idea when early feedback showed that people weren't too keen on carrying yet another hunk of plastic around everyday. Fortunately, most of the R&D that went into that original device carried over fairly easily to this mobile-friendly model.

Though Ramaci notes that iCache is in "good shape" from a funding perspective –- no VCs involved, just friends, family, and high net worth individuals –- it never hurts to have more cash in the coffers. To that end, iCache has recently kicked off a Kickstarter campaign, and to date the project has raised over $6,000 from 37 backers. As far as Ramaci is concerned though, it's not all about the cash, as that the crowdfunding platform is just as important as a mechanism for gaining feedback from potential consumers as it is for raising money.

Much as I love the concept, it isn't without its drawbacks. Let's say your Geode gets stolen –- while the fingerprint scanner should prevent anyone from gaining access to your accounts, and it seems simple enough to get up and running again with a new Geode, the phone inside the case is still gone. Therein lies the rub with all-in-one solutions like this: it's a whole lot easier to steal (or lose) a phone/wallet hybrid than a phone and wallet separately. And while the Geode doesn't require merchants to invest in additional equipment, I can imagine more than a few cashiers looking at the Geocard in puzzlement before calling their managers over.

Still, if everything works according to plan, Geode backers should be in for a real treat by the time summer rolls around. According to Ramaci, the Geode will be ready to ship between May and June of this year for $199, though KickStarter backers can lock in their own Geode for $159. Sign me up!