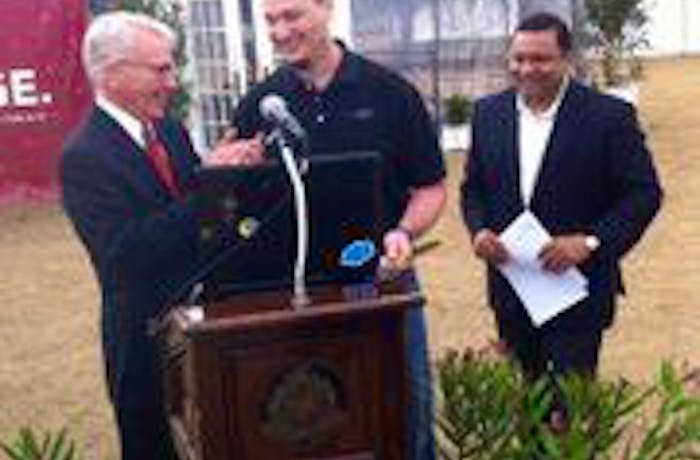 It's traditional to christen a new building by cutting a ribbon outside the front door. But how do you inaugurate a wireless Internet service?

By cutting the cord, of course.

That's what Eric Wages, operations manager of Google's Berkeley County data center, did Wednesday morning at the center of Marion Square just before Mayor Joseph P. Riley Jr. was about to send the ceremonial first email on the park's new Google-sponsored network.

"Hold on a second, mayor, hold on. We gotta take care of this first," Wages said as Riley reached for the laptop on the podium. "You don't need this anymore, ok?"

With the line scissored, the longtime mayor switched glasses, and after receiving some technical assistance from Charleston Digital Corridor Director Ernest Andrade, said, "Are you ready? One, two, three, Send! We're live."

The free service, paid for by a $47,000 grant from Google and owned and operated by the Charleston Digital Corridor Foundation, is expected to see heavy use from residents of the peninsula, especially college students; the city's hordes of tourists; and the festivals and events staged in Marion Square.

Randi Weinstein, director of events for theCharleston Wine + Food Festival, took a break from coordinating tent set-up Wednesday to contrast life before and after the new wireless network.

Before, Weinstein said she had to run wires from across Meeting Street into the park and cobble together multiple networks to meet all the exhibitors' and attendees' connectivity needs. "It was just a headache," she said.

Now, she has good coverage, and it's free. "It's invaluable, honestly," Weinstein said.

David Desplaces, the new director of the College of Charleston's Center for Entrepreneurship, said mixing business and pleasure in the park is typical of Google's and the Charleston Digital Corridor's forward-thinking approach.

"They're not looking for incremental change," he said, but rather "leaps" ahead technologically.