Embrace Change and Find Your Way Through it, Says Benefitfocus’ Fini 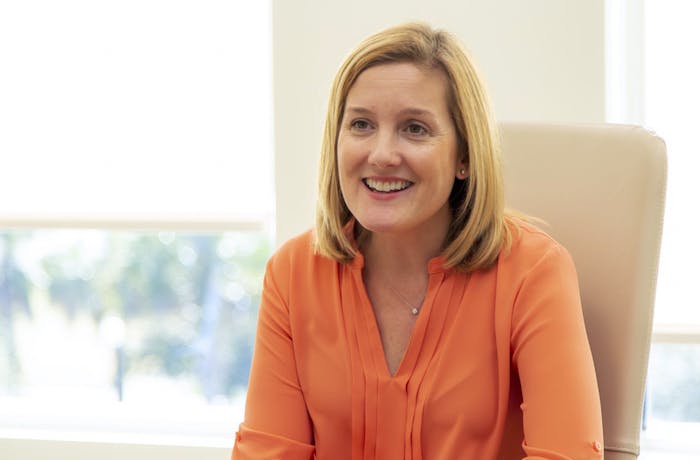 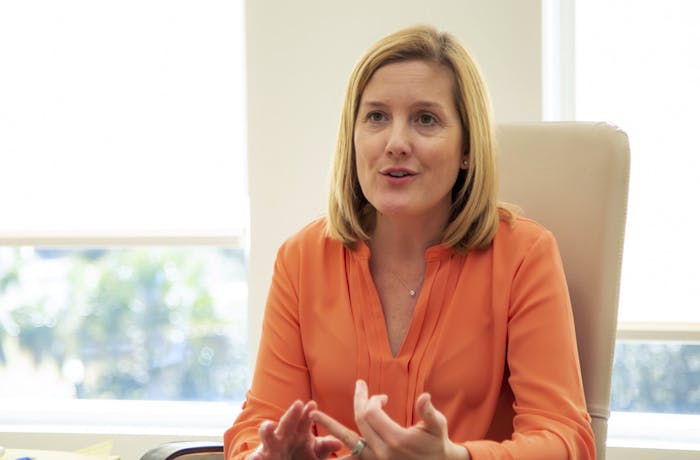 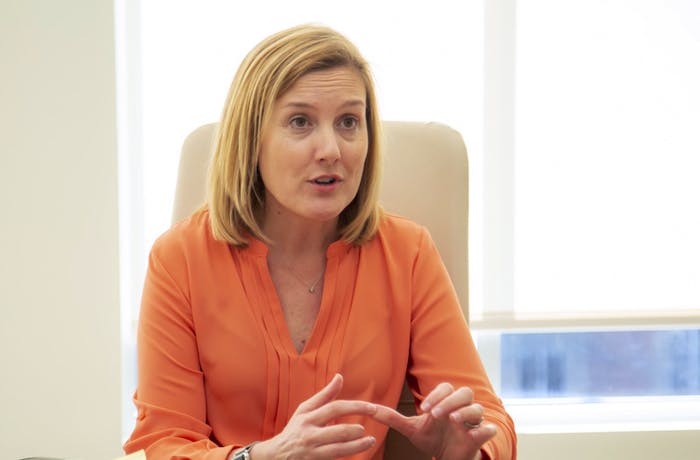 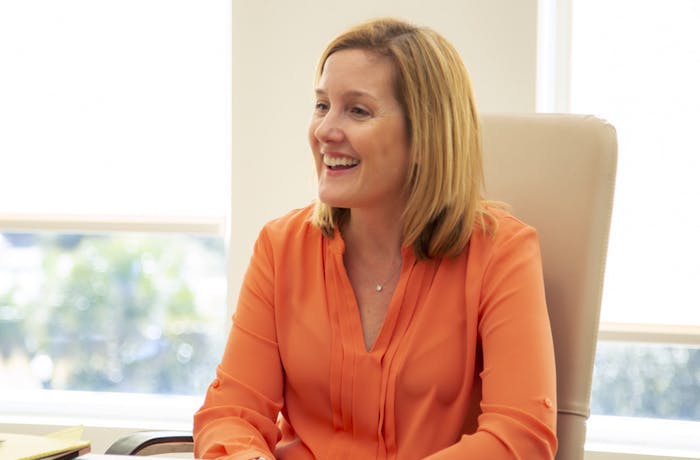 As a new graduate of Trinity College in Connecticut, Annmarie Fini took a chance on Charleston. Her college roommate suggested that Fini, a native of East Longmeadow, Mass., join her in Charleston for the summer.

Fini, who had just earned a degree in public policy, had no job lined up in Charleston and nowhere to live. She had no car. But she came anyway, rented a rundown apartment and found a job in benefits in North Charleston. She took the bus to work that first summer. By the summer's end, she purchased a car and decided to stay.

"I found my way and figured it out," Fini said. "And I've loved Charleston ever since."

Several years later, in 2000, Fini became the 16th employee at what was then a benefits software startup in Mount Pleasant called Benefitfocus. She traveled the state, working with clients to implement the company's software.

Thirteen years later, Benefitfocus went public. Now, 19 years later, it has about 1,400 employees, with roughly 1,000 of those based at its Daniel Island headquarters. Benefitfocus has more than 150,000 employers as clients and 23 million consumers using its platform.

Fini has held various client-facing roles with Benefitfocus over the years, including most recently leading the company's customer success organization. In 2018, she assumed her current position as senior vice president of platform strategy, focusing on consumers using the Benefitfocus platform to manage and maximize the value of their workplace benefits.

Back in 2000 when you joined Benefitfocus, what attracted you to the company?

I was actually a customer of the two founders, Mason Holland and Shawn Jenkins. They had a pension/401(k) business. I was familiar with what they were doing with 401(k) pensions, and then when they decided to start Benefitfocus, I was very excited to join them.

How would you describe the organization's culture?

It starts from the foundation of an entrepreneurial company, and it's maintained a lot of that. Last year, we took a look at our values on the back of our badge, and we crowdsourced them. Many of the values that were part of the original ones had just a slight tweak to them: Community, together, respect, anticipatory service, and – probably my favorite – own it, which is really, "Just get in there." To me, it means just take it, run with it, figure it out, and own it till it's done at the highest quality.

Have you learned any lessons from good bosses? Bad bosses?

I've always had really great people that I've worked with and worked for. As far as lessons – a few of them are attention to detail and making sure that all of the details work. The little things make a difference. How we present information and how we conduct ourselves, people notice those things. So being professional at all times.

Another lesson I learned early on from an entrepreneurial standpoint, is never giving up. Being passionate and being about what you believe in.

Ray August, as our new CEO since 2018, has done a fantastic job with communicating and staying transparent. He's been holding Q&A sessions every couple of weeks for all associates. One of the things I've learned from him is no matter how many times you communicate, it's never enough. People hear different things from messages, and it helps to evolve what we're talking about and how we talk about it. And making sure that we've got the right point of view up front, whether it's the audience of our customers or our associates or our shareholders.

What's the hardest or most important lesson that you've learned in business?

It's important to  embrace that and finding your way through it. Staying true to yourself, but fully jumping in and making the most out of it, because you never know what it's going to do for you professionally, but also personally.

I have so many great experiences that I can look back on. Not everything is easy. Usually, the harder it is, the more personal gain you get from it.

Women make up 26 percent of the computing workforce, and they hold only 11 percent of leadership roles, according to one study. What would help bring more women into the tech industry and to leadership posts?

I think it starts early on in terms of women getting computer science and even math degrees. I think encouraging that early on is important. My husband is in the teaching world, so he speaks to it all the time. There are some inherent areas that, as a country, we need to really promote and have more opportunities for girls to study in fields that they may not know anything about, but once they get into them, they thrive.

In terms of leadership style, I have spent my career working with women, men, different varieties. My voice may not be the loudest voice, but when I speak, people do appreciate my point of view. I've become more confident with that over the years. There are still a lot of stereotypes about women and about how they handle themselves in different work environments. You just need to keep going. And have an environment of inclusion. I think that's really important. Every voice needs to be heard, whether it's somebody who might be more introverted than others – and that's male or female. Just taking the time to hear different people and different audiences.

One of the things that I appreciate about Benefitfocus is the variety of people. Sometimes, we'll have 40 people come together just to hear the different points of view in all different levels of the organization. There's not really a hierarchy. Some of the strongest, most informed people are early in their careers, and they are confident to not be afraid to speak. Just some really fantastic women that I've had the pleasure to work with.

How do you think about work-life balance? How do you find fulfillment both at work and at home?

I don't work well in "life balance." I just work with what's good for me. I put my heart and soul into something. I'm in balance in terms of my schedule and accessibility for the company. I love what I do, and I have a very supportive family. I would probably be miserable if I had sort of a more balanced life, I guess. It's just who I am. I don't ever turn myself off. There's a lot of exciting things going on, and I just get into it.

I would recommend the Harvard Business Review membership. I get the daily management tips and other things. Inevitably, at least a few times a week, it hits exactly what I'm thinking about or struggling with. It's just got some really awesome articles or areas of focus, and it's a great search engine for things that you might be interested in.

Two kids, one who just started at Carolina, and the other lives locally here in Charleston. Anything that is outside. My husband and I love to play golf. I love to hike and just be outdoors.

We've had some really fantastic people, and I would say even more now that there are so many other technology options in town. It's attracting just a whole level of expertise from other parts of the country.

Do you find any challenges recruiting talent here?

Really, we don't. We have a lot of people who've moved here to join Benefitfocus, but also people who are out of college that are starting their jobs.

It's become a very diverse situation in terms of where people want to work, how they want to work, when they work, what they do. There's just a lot of other ways that people can pursue their passions and do whatever they want to.

When we look at it from a benefits standpoint, we are seeing a lot of people who need to have a variety of benefits. There are five generations in the workforce now, and so there are people who are early in their careers and just starting out and maybe are getting their first apartment, first car even, or have student loans that they're worried about. There are benefits that didn't even exist as benefits before.

So it's a very interesting time for people in the benefits community to be able to offer an array that fits every person in their workforce. That's something that we as a company have become ultra-focused on: that consumer experience and providing what is a best suitable benefit package for everybody. It's very individualized and personalized. People are working up until their 70s now, and so it's a dynamic space in terms of having different experiences and skills and being able to attract and retain them.