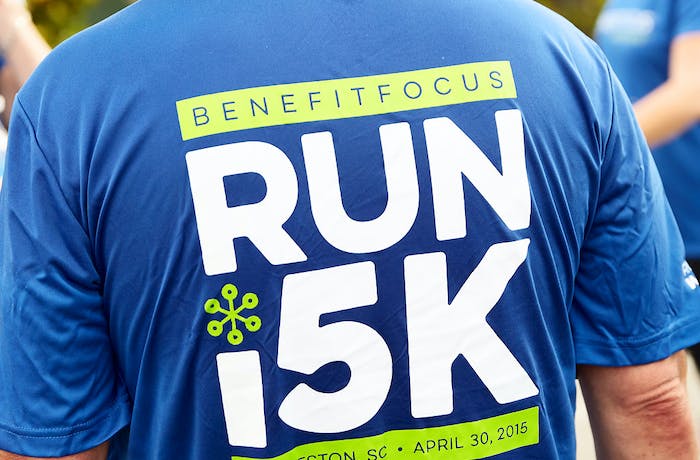 Charleston, S.C. (May 1, 2015) – Under near perfect weather conditions, Charleston's tech community once again gathered for the ninth annual Innovators iFive:K Run-Walk-Shuffle event. The unique weekday event has grown from 250 runners at its launch in 2007 to its cap of 800 registrants, and sold out within 30 days after tickets went on sale on January 1, 2015.

The iFive:K, sponsored entirely by Charleston's robust tech community including title sponsors Benefitfocus and Google, allows for an evening of spirited competition and networking while raising scholarship funds for CODEcamp and other education initiatives of the Digital Corridor. The 2014 event raised almost $45,000, another record amount.

"There is no better example of tech community engagement in the country than the iFive:K race," said Charleston Digital Corridor Foundation Director Ernest Andrade.

The iFive:K race event was followed by an after-party at the Charleston Maritime Center where companies competed for the coveted "SPIRIT" of the race award. This year, Blue Acorn won the award and the annual bragging rights that go along with the trophy.

To view pictures from the race, visit the 2015 iFiveK photo album and race recap video on the Digital Corridor's official iFive:K video channel. With another successful year in the books, planning is already underway for the 2016 iFive:K.

About the Innovators' 5K (iFive:K) The iFive:K is an annual event that brings together Charleston's tech community for an evening of spirited competition and networking. All proceeds from the iFive:K support CODEcamp scholarships and education programming. More: ifivek.com

About the Charleston Digital Corridor The Digital Corridor is a creative initiative to attract, nurture and promote Charleston's knowledge economy through a combination of technology-enabled initiatives and business incentives, private business support and member-driven programming. More: charlestondigitalcorridor.com