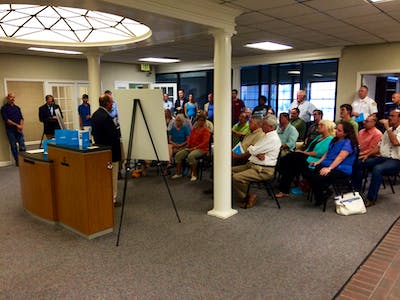 Charleston, South Carolina – The Charleston Digital Corridor is pleased to announce a partnership with the City of Beaufort to launch an implementation of its highly successful tech business development initiative. The vote passed unanimously and with high praise at the June 21st, 2016 meeting of Beaufort City Council and the Redevelopment Commission.

Mayor Billy Keyserling and City Council laid out four straightforward goals - diversify Beaufort's economy and expand the tax base; transition military personnel to the civilian workforce; court visitors to relocate and create jobs; and develop relationships with all levels of public education.

Like Charleston, the Beaufort Digital Corridor's mission is to attract, nurture and promote high-wage tech and tech-related companies in the city and the Sea Islands by diversifying the city's economic base.

Stephen Murray, a Beaufort City Councilman and member of the Beaufort Redevelopment Commission, was instrumental with establishing the Beaufort Digital Corridor. "We have a lot in common with Charleston including history, beautiful buildings, pristine coastal environment, and a lifestyle that is appealing to young tech entrepreneurs," Murray said. "The key is to provide the business, social and education infrastructure to get them started and succeed here."

The first step for the Beaufort Digital Corridor is the renovation and up-fit of a city owned building, just blocks from Bay Street and the city's Waterfront Park. Dubbed BASEcamp, the 5,000 square foot business incubator and co-working space, located at 500 Carteret Street, is expected to be available for tech and tech-related companies late Fall 2016.

"We will utilize the hands-on experience of Ernest Andrade and his team to execute this business development strategy for the city of Beaufort," said William Prokop, Beaufort City Manager. "In essence, the Charleston group will incubate Beaufort's tech business development effort."

The success of the BDC will require meaningful participation from the Beaufort community. "We will seek private professional and financial partners to assist us with making the Beaufort Digital Corridor successful." Keyserling said. "We're going to make this work."

"There is no silver bullet to helping Beaufort become successful," said Charleston Digital Corridor Director, Ernest Andrade. "We will address the issues with a practical, measurable and long-term approach and with the direct engagement of the community just as we do in Charleston."