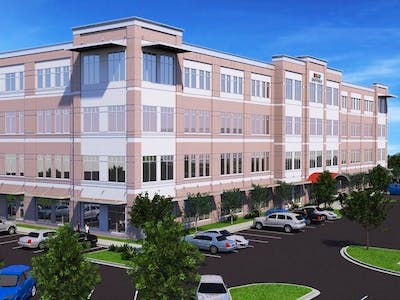 In a huge boost for the region's technology scene, fast-growing software maker Benefitfocus Inc. is expanding its Daniel Island campus again, with plans to add 1,200 jobs and a big slug of new office space.

The total investment is $60 million, and it would triple the size of the company's Charleston workforce, said Mason Holland, co-founder and executive chairman. It marks the biggest corporate expansion for the region since Boeing Co. picked North Charleston for its East Coast 787 assembly plant four years ago.

The first phase calls for a 145,000-square-foot, four-story customer training and support office off Fairchild Street that would house up to 600 associates, as the company calls its employees. It's expected to be completed in early 2015, along with a smaller nearby visitor and conference center.

"Charleston is our home, so we want to grow here," said Benefitfocus CEO and co-founder Shawn Jenkins.

Another 145,000-square-foot office building would follow later for 600 software engineers, designers and other technical staffers the company plans to hire.

Benefitfocus recently purchased 23 acres for the expansion, which was assigned the code name Project X. The company plans to carve out a two-acre pond and a trail system on the site to help create a college-like setting.

The state is offering an incentives package that would be valued at $30 million if Benefitfocus hits all of its hiring and capital investment goals. Under a previous $10 million inducement deal, the company beat its employment commitments by 50 percent, Holland said.

"I think that's a big point," he said. A groundbreaking ceremony is scheduled for Tuesday. Among the expected guests are Gov. Nikki Haley. "Benefitfocus is an excellent example of innovation in our state," Haley said in statement Monday.

Founded in 2000, Benefitfocus has blossomed into a big high-tech employer in Charleston. It develops software products that employees can use to compare, sign up for and manage their workplace benefits, such as medical coverage and life insurance.

Its primary customers are large employers and insurers.The firm has come a long way since being launched with 15 people in a renovated former Walmart discount store in Mount Pleasant. Its financial backers now are led by Wall Street powerhouse Goldman Sachs & Co., and it has opened outposts in the Upstate, Oklahoma and San Francisco.

The company marked a major milestone in September, when it raised more than $70 million to accelerate its growth by selling stock in an initial public offering. Its Nasdaq-listed shares have more than doubled since the IPO to about $58.

On Monday, workers were scrambling to upfit and furnish a second office complex that Benefitfocus built to accommodate its growing squad of software designers and engineers. They'll start moving in by the end of the year, Jenkins said Monday.

"In two weeks, it'll basically be full," he said. A red-and-white restored 1959 Chevrolet Corvette convertible will greet visitors in the lobby, part of the firm's goal to create a casual and fun "open social" work environment that fosters creativity and collaboration. It's also meant to help impress customers and recruit what Jenkins calls "top talent" to Benefitfocus.

Holland said the expansion will give the company about 500,000 square feet of office space on Daniel Island, more than any other high-tech business in the region. "That's a lot, and, I think, pretty cool. Way cool," he said.

"It's the most significant announcement this community has seen as it relates to the development and acceleration of the Charleston tech economy," he said.

Benefitfocus is capitalizing on the shift away from old-fashioned paper-based benefit manuals and forms by developing what Jenkins called "best of breed" online products that simplify the unwieldy process. He estimated that U.S. employers spend more than $1.6 trillion a year on health policies and other perks they offer workers.

"It's a huge spend," he said. He and Holland also noted that the potential market for the services that Benefitfocus offers is equally huge. Of 18,000 large employers in the United States, Holland said fewer than 400 are on the company's software platform.