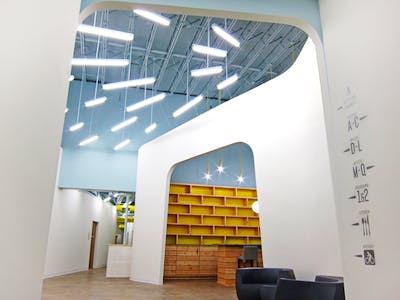 CHARLESTON, S.C. –- A decade ago, as property values on the Charleston peninsula were skyrocketing, wages based largely on tourism and service industries were nowhere near keeping pace.

That problem proved the genesis of the Charleston Digital Corridor, a successful economic development strategy that created a public-private effort growing startup technology companies that could pay higher salaries.

"We were risking creating a third-world country of haves and have nots," said Ernest Andrade, who has headed the corridor since its inception in 2001 and said one of the corridor's biggest selling points is Charleston itself.

The corridor helps startup knowledge and computer-based businesses with incentives, training and finding employees. The next step is to provide startup capital and grants as well.

The corridor opened its first business incubator, Flagship, back in 2009 in what was once a video rental store. Since that time the corridor has worked with 51 companies, which in turn have created 200 jobs and an estimated $15 million in payroll.

The corridor now has a second incubator, Flagship2, which opened last year in a building once occupied by a television station at the edge of the city's historic district. Of the 51 companies that have worked out of the incubators, only three have folded.

Corridor members are involved in everything from software development and interactive marketing to video production and information technology consulting.

One of those new companies is Phishlabs, which helps banks and e-commerce companies deal with cybercrimes. It's a growing market, said John LaCour, the company's CEO.

"We're amazed by the number of companies that have not been targeted in the past that have begun to be targeted," he said. Phishlabs started in the incubator more than two years ago with two employees. It now employs 12.

LaCour, who moved with his wife to her native Charleston several years ago, said he contacted the corridor for help in starting his business.

The corridor also operates CharlestonWORKS.com, a website that helps connect employers and workers and helps spread the word the tech industry in Charleston is growing.

Blackbaud, which started in 1981 and now has 2,800 workers in eight countries, provides software and services to nonprofit groups. Google operates a $600 million data center it opened four years ago in nearby Goose Creek.

The corridor has 94 member companies that pay employees an average wage of about $67,000, well above the regional average of about $40,000 and the state average of $38,000. A recent survey of corridor members showed that all added employees this year and almost three-quarters plan to add new workers by years' end.

The city budget for the corridor is about $300,000 which provides four jobs.

Andrade, who has worked for the city for 25 years, said the idea of helping startup businesses is not new. But incubators vary by community, which gives Charleston an advantage, he said.

"Unlike manufacturing, a knowledge and lifestyle-based industry can be anywhere, and here we have a world-class city that (Mayor) Joe Riley has honed since 1975," he said.

"The real advantage Charleston has is Charleston" and those interested in starting such businesses are attracted to the Charleston lifestyle, he said. "Why Charleston's knowledge economy is successful is we have leveraged the place."