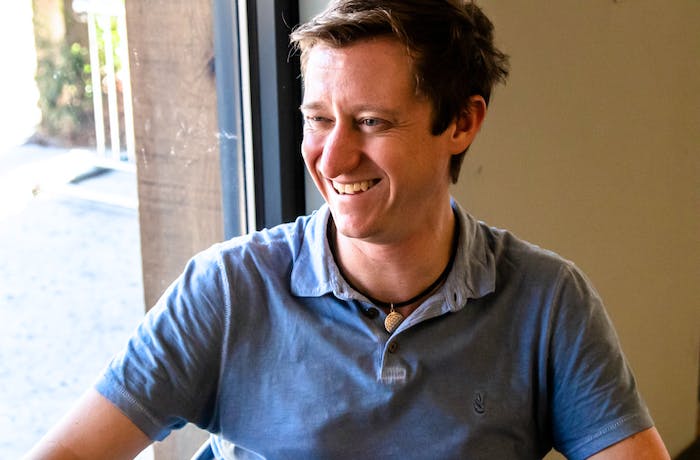 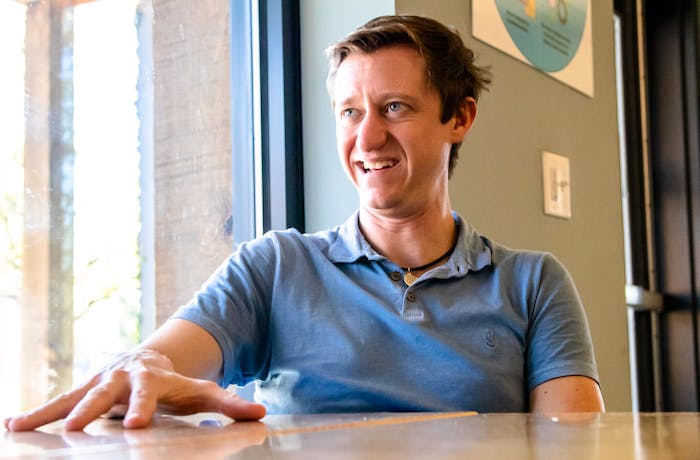 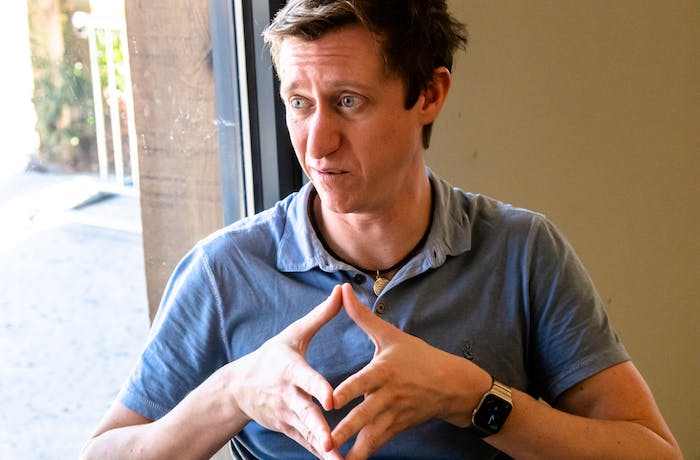 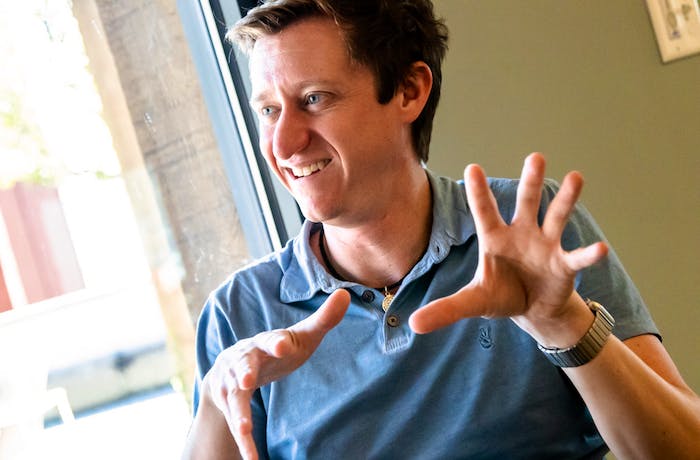 Jonathan Yantis is co-founder and CEO of startup QuicksortRx, which offers pharmacy supply chain optimization software to hospitals. Yantis and Matt Hebbard launched the company in late 2018 to market a software program they created for the Medical University of South Carolina while working there. QuicksortRx is based in Downtown Charleston.

Jonathan Yantis spent more than a dozen years as a network engineer at the Medical University of South Carolina before landing a dream opportunity.

His boss in 2017 took away his day-to-day duties for a year, introduced him to hospital executives and gave him one assignment: Find a problem in healthcare – any problem – and solve it with technology.

Yantis eventually zeroed in on the high cost of pharmaceuticals to the hospital, and the mind-bogglingly complicated process that a team of buyers used to compare drug options.

He collaborated with Matt Hebbard, who was then a pharmacist at MUSC.

"He was working in supply chain, and they were managing $100 million worth of pharmaceutical purchasing through spreadsheets," Yantis said of Hebbard. "'He was like, 'This is crazy. I've found all kinds of opportunities to save money, but I'm spending all my time on it. I know it could be solved with software.'"

Yantis, working with a small team, built a software program to manage the buying with a focus on identifying cost savings.

"By the end of the first year, we saved a fortune, millions of dollars," Yantis said. "We knew we had to commercialize it."

In late 2018, Yantis and Hebbard left MUSC to do just that. They founded QuicksortRx and now are marketing the solution to other hospitals as a software-as-a-service.

Where did you grow up?

I grew up here in Charleston, over in Mount Pleasant. My father was a physician here in town. He did his residency here at MUSC and then went into private practice. I've been here my whole life.

Did you move away for college?

I didn't. I got an opportunity to leave high school a year early and go to the College of Charleston for one year. I was planning on going to Clemson because that's where my friends were going. But once I moved downtown and stayed here for a year, it was like being in a whole other world. I fell in love with it. Loved the computer science program here, that was really great, and the friends I made that first year. That kept me here.

I did study abroad and traveled all over, but I can't leave this place. And now we're starting a company here. I love Charleston. Big world out there, but this is a great place to be from.

What was your first job, or a memorable early job? What did you learn?

My first job was actually working at a pharmacy, which is kind of ironic, delivering pharmaceuticals to people, most of whom were immobile, couldn't come pick up their prescriptions. So I was a prescription delivery boy.

When I got into college, though, my first real job that was impactful was working on the network team there to maintain our network at the College of Charleston. I was a student worker, and that was an amazing job. I fell in love with networking, and that defined a decade or more of my career.

In your own words, what does AscendRx do?

The pharmaceutical market is very complicated. There are all kinds of factors that come into play. It's not something where you can just go to a website like Amazon and say, "We need vials of this medication," find the best price, and order it.

It is incredibly difficult to understand all the components involved. We want to pay the lowest prices, but it is not transparent. We in the hospital wanted to figure that out without having to spend hours just comparing products. It would take hours just to compare two products.

We had 30 different people buying pharmaceuticals at MUSC. It was no fault of anyone's, but it was possible to make very expensive mistakes and waste $100,000 in an afternoon on one bad order. But you also need those medications to save people's lives. So those folks are under a lot of stress, and nothing was available to them to just quickly solve these sorts of problems.

So we created a software solution. When it was done, it sorted all the needles in the haystack, threw them to the top of the list and made the supply chain team's jobs way easier.

Now we offer it as a SaaS solution cloud software that's easy to deploy at another institution. Doesn't require them to change a lot of what they do. It just gives them the insights they need to quickly make decisions. Hugely impactful from a customer standpoint. To them, it's almost life altering compared to where they were before and how they can operate now.

We have a very niche product that solves some specific problems, but they're very expensive problems in healthcare.

Your market is specifically hospitals?

Hospitals. Specifically, disproportionate share hospitals, ones that serve indigent populations, and nonprofits, because their lives are actually far more complicated. We believe in their mission. We have the same mission at MUSC. We have certain hospitals that we are targeting initially that we can help the most, and we'll get as far as we can there before we expand and help other hospitals.

You were a network engineer. Did you ever see yourself becoming an entrepreneur?

I've been working through this. My heroes have always been founders of other companies, entrepreneurs. When I was really young, Bill Gates was the guy I looked up to. Then it was, of course, Steve Jobs. Elon these days, and Bezos, and those folks. I really have always looked up to those people. I used to watch their interviews and read their books, but I was happy just creating things and studying these people from afar.

I don't know if I wanted to be an entrepreneur. I think my heart knew I wanted to do it, but I would always think, "No, I'm happy doing what I'm doing. I'm happy creating new things. I like to create things." The creative process, to me, was much more important than monetizing my work.

Right now we're just executing, and that part looked boring. But somewhere along the way I realized that, nope, building a business could be just as creative and just as fun. And what good is doing all this if you don't share it?

What is the hardest lesson you've learned in business?

The hardest part is constantly recognizing your weaknesses are standing in the way of where you want to be. And not just recognizing it but coming up with strategies to invest and grow yourself.

Making sure I am serving the business and growing to meet its needs – doing that as fast as possible without killing myself – that is a challenge.

Are you separate from MUSC at this point?

Yes, completely separate. We have a relationship. They are a stakeholder in our company. We have certain obligations to them. But they gave us pretty wide rein to get out there, sell the product, commercialize it. Which is great.

We worked with the Foundation for Research Development. They were fantastic to work with. We were able to get a deal that worked for them and the company.

What connections do you see between the tech community in Charleston and MUSC's work and research? What are the possibilities?

I see almost unlimited potential. I am working with people at MUSC to figure out how I can give back to MUSC and make it easier for people to do what I did. I think there wasn't even an awareness that this was possible among a lot of folks at MUSC, very talented people who had no idea about tech transfer or any of these other things.

At MUSC, healthcare must go through major transitions. It just must. The cost is just out of control and unsustainable. We have to figure out how to deliver the same or better healthcare for less.

When I look back, if everything failed here at this company and we just went out of business tomorrow, I know half a dozen other ideas at MUSC that I could go back and pursue. Maybe they wouldn't be half as successful here, but maybe they would.

There's incredible opportunities in healthcare, yet accomplishing things in healthcare is very difficult. I've learned a lot of lessons over there that I'd like to contribute back to MUSC. Giving back to MUSC is very important to me. I have high hopes for that organization; they have been just so good to me.

Do you have employees at this point?

Matt and I are full time. We have another guy who is part time. And then we've got a lot of contractual employees, and we're going to be hiring this spring.

Is there a book that you always recommend?

No. 1 is "The Obstacle is the Way" by Ryan Holiday. Conceptually, it's that when life throws up roadblocks, those are guideposts and you go right into that. You don't say that, "Oh, I got stopped and we're not going to be able to commercialize the product now because we couldn't figure out this legal issue." No, that legal issue is the No. 1 thing in your life right now, and you're going to figure it out and you're going to run right into it and get help from people, and next thing you know, it's no longer an issue. You're past it.

Learning that when things don't go your way, that that's a sign that you need to go into them, not run away from them, not use them as excuses to give up – that's life changing. Because when you incorporate all those things, you end up building a much stronger position.

The other book, which I just love, is "Zero to One" by Peter Thiel. How to go from something that never existed before to something that now exists in the world. That book was just transformational in how I view what a business should be about. How to go about structuring my own thinking to create things that have never been done before. I've read that book I don't know how many times. Those two books are super influential to me.