PlanSource’s Sansom: As Work and Life Converge, Results are What Matter 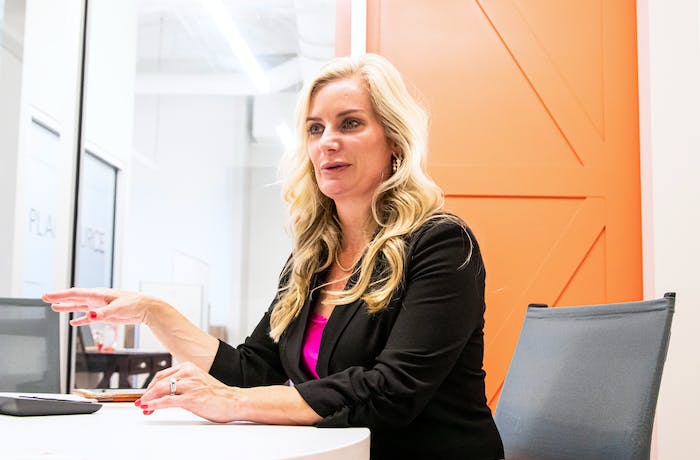 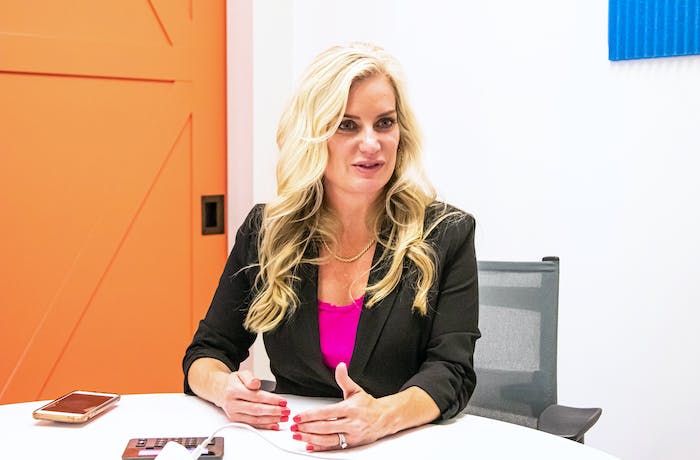 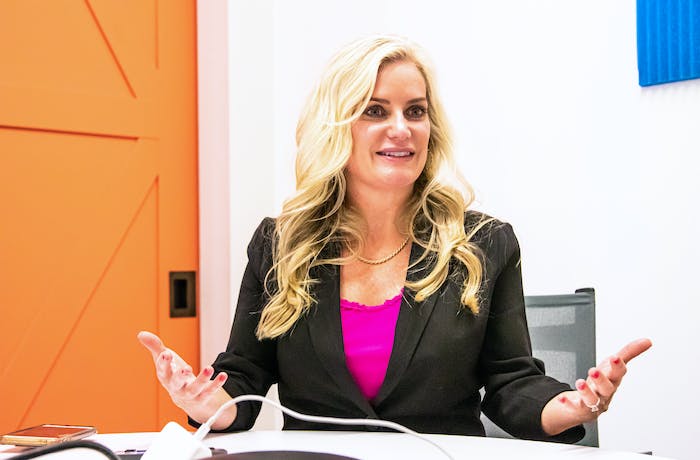 Nancy Sansom is Chief Commercial Officer for PlanSource, a benefits technology company based in Orlando, Fla., with an office in downtown Charleston. The company opened its Charleston office in 2014, when Sansom joined. PlanSource has about 625 employees, including 20 in Charleston.

Nancy Sansom initially brushed off recruitment efforts from PlanSource. The Florida-based benefits technology company wanted her to build and lead its marketing function.

"'The first thing I said was, 'So sorry, don't want to waste your time. I'm not leaving Charleston,'" said Sansom, who has lived in Charleston since 2000.

But then PlanSource offered a twist: Sansom could join the executive team but stay in Charleston. She could leverage her network and build the marketing team locally.

"I thought, 'OK, now this sounds really interesting,'" she said.

Sansom said she wasn't looking for a change at the time. She had worked for Benefitfocus, a major player in benefits technology, for 10 years. She had moved to PeopleMatter (now Snag), which offers workforce management software, and was enjoying the different focus.

"But the opportunity to build a team in Charleston really appealed to me," Sansom said.

She joined PlanSource in 2014. Her Charleston-based team now has 20 members and is still growing.

"We are a satellite office here in Charleston, but it's an important place for us to be because there's a lot of domain knowledge in human capital management and benefits technology here, with Benefitfocus and how they've grown, but also other companies and startups in the area of HR technology and a lot of tech people in general," Sansom said.

"We want to move quickly, so having talent that's already up to speed on our domain is really important," she said. "We can hire key talent here in Charleston that can ramp up very quickly and start adding value pretty much on Day 1. We've done that already in this office with some of the key hires that we have here."

Where did you grow up, and what was life like?

I grew up in Zanesville, Ohio. Just a small town. My graduating class was probably 250. It was a small enough high school that you could participate in cheerleading, band, student government, all that kind of stuff. So I just kept real busy doing all of that.

I went to college at a small, Christian school north of Pittsburgh called Grove City College. Twenty-five hundred kids. That's where I met my husband, and we kind of settled in Pittsburgh. I went to Carnegie Mellon, got my masters there, and then discovered Charleston when coming down here on vacation in 1996. My husband and I decided this is where we wanted to be, so in 2000, we moved down here.

What was your first job, or a memorable early job? What did you learn from it?

I was an intern in college at a company called Diebold. They make automated teller machines. I was helping them with work instructions for ISO 9000 certification, which is a quality standard that manufacturers try to get certification toward.

I wanted to be in manufacturing. I wanted to change the world. As I was growing up, it was all about how American manufacturing was in decline. I wanted to help keep that from happening, so I was studying Japanese manufacturing techniques and really fell in love with their approach, which is just-in-time inventory and on-demand production.

Pittsburgh was a perfect place for me to be doing all of that, but it wasn't the easiest place for a 21-year-old female in a heavily unionized environment. So as I started to get into tech, which just happened naturally with ERP system implementations, I started to realize how much I loved doing that, and then kind of bridged over into software companies completely.

In your own words, what does PlanSource do?

Our company is a benefits technology company. We create software that helps people shop, enroll, bill and manage their benefits. It helps HR teams with compliance and benefits administration, and then it helps employees get enrolled in the right plans for themselves and their families.

What's the best part of your job?

I like managing a team and helping share a vision with them. What I tell the team here is that I want to be the best marketing team in the country for a software-as-a-service company. That's what we're driving toward, so I want to attract people who have a lot of initiative and want to be the absolute best at what they do. That gets me excited.

We do an annual event for the company, which we started after I got here, called Eclipse, and it takes a lot of energy and over a year of planning to pull off. Our customers and partners leave the event just completely re-engaged, and they leave the event as evangelists of PlanSource, which is part of my goal. So stuff like that makes me feel a lot of fulfillment in what I do – the whole team coming together and firing on all cylinders to accomplish something big.

What's been the most pivotal position that you've had in your career so far, and why?

I spent a lot of time in product in the early years at Benefitfocus. I was the first product manager that the company hired, and then I ended up leading product for several years. I enjoyed it. I thought that was what I was meant to do. Then my boss at the time, the CEO of Benefitfocus, asked me to lead marketing.

I had never led marketing. That was a pivotal moment for me, and a pivotal change in my career. I loved product. I thought that was what I was meant to do. I'm not even sure how excited I was about doing marketing, and then once I started doing it, I realized I loved it.

In marketing, you can have an impact even faster. It takes a long time to build technology. From the time it takes to have the vision, to it being delivered, customers are using it – it takes a lot longer than you want it to. But in marketing, you can make changes that are pretty impactful really quickly. Within weeks, not months or years.

I've loved that about marketing, and it's forced me to think a different way. In product, there's so much detail, and you have to spec everything out so that engineers know what to build. But in marketing, it's more big-picture – the messaging and the way that your product or brand makes people feel. I liked thinking about it in a broader way and having an impact quickly.

Now, I've been in marketing longer than I was in product. I was able to come into PlanSource, which had no marketing at all, and really build the brand from the beginning. Making that switch from product into marketing ended up being a key pivot for me that I hadn't anticipated, but I'm glad I had that opportunity because I've learned so much more.

A lot of people are talking about everybody working from home. But what my boss did when he put this executive team together, he basically said, "I want the best people in these areas, and wherever they live, we'll make an office there."

So we have our president and COO in Minneapolis, and they have an office. We've got this office in Charleston with a lot of our go-to-market team and a little product. Salt Lake City was our development team, and then our headquarters in Orlando. Then we acquired a company that did benefits services, which was something we needed as an add-on to our technology, and they're all in Grand Rapids, Mich. It's a lot of offices.

It's not just about an individual contributor working from home; it's about having an executive team that has to manage a business in five different locations. It has its challenges. Of course, we use video all the time, but it's hard when we need to get together. But the way my boss looked at it is, "I want to have the right people to manage these functions." It's good, and I see more companies thinking of it this way: That's the person I want, they happen to live wherever, how can I make that work?

How do you think about work-life balance, and what strategies do you use to find fulfillment both at work and in your personal life?

I think life is all blending together. A lot of people talk about work-life balance. With three kids, I don't know if that's even the right term for it anymore. Everyone just has to figure out what's going to work for their family.

If you're a parent, you're taking off to go to the school meet-the-teacher, and parent-teacher conferences, plus your doctors appointments that everybody has. But you're taking a call at night because there's a meeting in the morning and you've got to talk to someone about it, and stuff comes up. The pace is fast. So there's a lot of calls in the car and everything we do to just get things done.

It's a very results-oriented environment, and I feel like my boss just expects me to get stuff done. But he would never wonder if I'm in the office. He doesn't even ask me that. He is going to see me on video wherever I am, if I'm in the parking lot waiting to go into an appointment or go to my kids' school or something. It's not even a factor. It doesn't matter.

Fitness is really important to me, and I try to get a workout in every day. That's what keeps me sane. So I have to figure out how to do that, be a mom of three, manage all these partnerships and our marketing team, and so sometimes it all blends together. I think that people originally thought that work-life balance was some sort of separation. But I maybe want to catch the 4:15 p.m. Orange Theory class because my husband is out of town, and if I don't do that, the nanny has to leave at 6, so it's just not going to work out. So I'll just go do that, but I'm going to be working later when the kids are in bed. So it blends together. The point is you have to get results.

What advice would you give to women pursuing leadership roles in the tech sector?

I actually think it's an advantage more than a disadvantage. Not all the time, so I don't want to offend anyone who has felt like they were not at an advantage. But I think it's easier to be noticed, and you stand out and you are a little different because it's more unusual to have a female leader.

People are focused on it now, and they want to seek out women to put in leadership. So that can only help. As far as advice, I think we should see it as an asset as much as possible and just have that attitude about it.

In some industries – I mentioned that I was in manufacturing – it was very difficult to be female in that world. I could tell stories that would disturb you about my first job and what that was like. Coming from that, in tech, there's nothing like that that I've experienced.