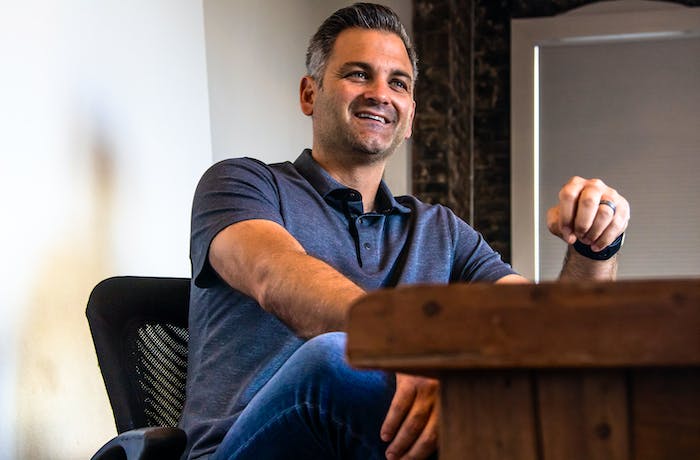 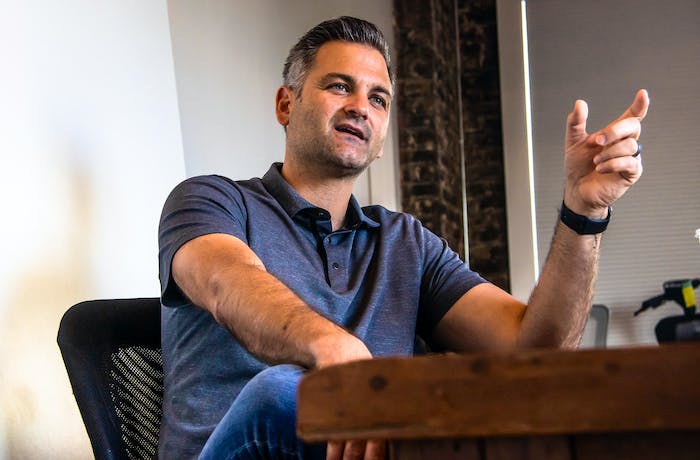 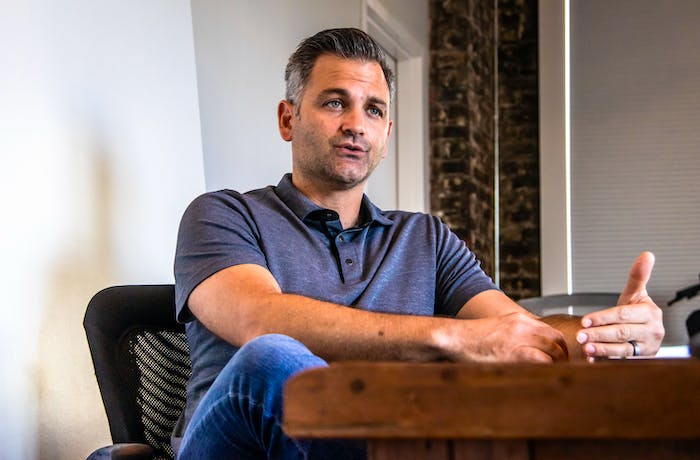 Sean Flood is founder and CEO of Gotcha, a mobility-as-a-service company that launched 10 years ago on the campus of Florida State University. Gotcha now operates electric bicycles, tricycles and scooters and electric vehicles. The company is headquartered in downtown Charleston.

In his mid-20s, Sean Flood found his calling in real estate.

After college and a stint in the corporate world, Flood began redeveloping historic properties in downtown Atlanta. In his words, "everything I touched turned to gold." He loved it, was good at it and planned to be a developer forever.

Then came the real estate market collapse of 2009.

Reeling and wiped out financially, Flood took a trip with a friend to his alma mater, Florida State University. While hanging out with former fraternity brothers, Flood heard current students talking about the difficulty of finding rides to and from bars. It was 2009, before the rise of Uber and Lyft, and the situation got Flood thinking about a solution.

"Two days later, my buddy and I went back and convinced FSU to let us bring a rideshare program to campus," Flood said. "We went and bought five electric vehicles. I relocated to Tallahassee to start the original Gotcha."

Days after moving, Flood met his now-wife, Jacklyn, and the two began building the company together.

Ten years later, Gotcha has grown to over 100 employees and contracted with 106 college campuses to operate mobility programs. Roughly 40 of those are up and running, and the rest are launching in the coming months.

Gotcha's business model has shifted, and its vehicle fleet has evolved beyond its original electric vehicles, with seats for six, to include electric bikes, scooters and trikes. And Gotcha's focus has broadened as it operates within the shared-mobility space, seeking alternatives to single-passenger cars.

"We fundamentally believe that if you get people out of cars, in particular single-passenger cars, you improve the daily lives not only of those folks, but the people around you," Flood said.

We have evolved a lot. Today, Gotcha is an e-mobility-as-a-service provider. We design and deploy all-electric shared-mobility products. Today, that's an e-bike, an e-scooter and a trike. Then we have a whole software side; we developed the app platform.

The goal is to be a one-stop for a consumer to be able to open their phone in a market like Charleston and use an e-bike or a scooter or a trike, something other than a single-passenger car.

What is an e-bike?

We've converted all of our products to electric. The original bike we have here in Charleston is a pedal bike. You just pedal it, and it goes. Our new product is an e-bike, so it has a battery and a motor. So you still have to pedal, but you could bike over the Ravenel Bridge, and it would make up the difference and allow you to continue pedaling at your same pace. It's a pedal-assist bike. An unbelievable riding experience.

An e-bike allows you to bike to work and not be sweaty when you get there. It allows folks who just don't think they're physically fit enough to bike. There's a whole group of our population who are like, "I'd love to bike, but I can't do that." So they just wouldn't try. These electrified products open it up to everybody.

What brought you to Charleston?

We moved to Charleston five years ago when Gotcha was just my wife and me. We had an office on King Street that we kind of leased desks at. It was, at the time, purely for lifestyle. It was before we had kids. We lived in Atlanta and wanted something that was a different pace and a different makeup.

We knew nothing about the startup culture or business environment. Probably like a lot of people, we just thought of it as a tourist town that had history, good food and booze. Our mindset has changed a lot since then about the city.

That it's easy, and that it's always fun. I think we, particularly in America, lift up entrepreneurs as the backbone of business and everything looks fun. You can be casual at work, and you can have an office that has cold brew and beer, and you can do fun things and not be tied to this corporate America.

The thing I think people don't see is that, one, it's an unbelievably lonely job. You only get to see the outwardly exciting stuff. But you ask any successful entrepreneur, and they've got real battle wounds. You've got to make hard decisions, typically by yourself. People only see the positive. And I don't think the majority of folks who are just jumping into it appreciate the amount of work it really takes.

Gotcha is actually an accidental tech company. When we originally started our rideshare, there was no app. It was a phone number that people called. And for the first eight years, we outsourced all the technology. We licensed the lock that's on the bike here in Charleston from a company that's now owned by Uber. We didn't have any software engineers. I hired our first software engineer 18 months ago and, at the time, was like, "Hey, could you build and deploy our entire app?" And – I think he was maybe just being nice to me – he was like, "Sure. I can do that." Well, we have 12 of them now, a data scientist, and tech support people.

I didn't set out to build a tech company, but our bikes and scooters are basically iPhones that people ride. Everything has a tech piece. I've learned on the job how engineers look at a problem, and how you build out a team focused on that. I'm still learning that side of it. But I would fully encourage people to jump into that side of it.

What I think is important from a technology standpoint, if you're in school and want to work in tech, is having that daily drive and work ethic. Because building new technology is not easy, and I don't think there's a simple formula for it. We're lucky that we've got an amazing team of engineers who work very long hours but have very creative solutions around it. That's imperative. People who want to come out of school and just go sit in front of a computer and code, then this kind of environment, a startup, probably isn't for you. There's probably a great job. But if you want to get out there and really build something, I think there's no better place for it.

You didn't have an app until 18 months ago?

We outsourced it. It was another person's app. When you opened it, you had to go find the Gotcha system. For a while, we had two: we had a rideshare app and we had a bikeshare app. Our team has now combined those. But that's within the past 12 months.

I'm not an engineer, so I didn't know the process around it. It has reenergized me around the concept because you get to learn a whole new need and skillset.

I don't think the shared-mobility space is a trend. I fundamentally think we're not all just going to go back and want to buy more cars. I think the single-passenger car days are behind us. I think the auto industry sees that, and that's why they are partnering with people like Gotcha.

I think the next 18 months of the industry is going to see a lot of capital raising, which we are in the process of doing, and consolidation, which I can see happening for a company like Gotcha. In North America and in Europe, shared mobility is such a big industry that you're going to have some winners and losers, and then at that point you're going to have some consolidations.

While we have an office in LA, we've been very focused on running a company that is tech-enabled and has electric-based hardware, and doing it out of Charleston. Our headquarters is here. Across the street, we have a warehouse where we build and test all of our products. We do that all on the peninsula. What is challenging, candidly, is how do you find the right investors who understand you can do that here and not just in Silicon Valley.

To the best of my knowledge, we're the only shared-mobility company not in San Francisco. We've been able to grow it successfully. But the next challenge is how do you find investors who want to step up and say, "I want to invest in that community"? It's probably been the biggest challenge to me.

How do you address that? Or how does the community address it?

I think Charleston is doing a better job. And I've only been here five years, so I don't know all the evolution of it. I think you've got to get investors to realize this isn't just a place to go vacation. There are probably plenty of investors who have great houses out at Kiawah and the beach, but you can really build a business here.

We've got great talent. It hasn't been difficult to retain people who went to College of Charleston or The Citadel. It also hasn't been difficult to convince people to move here. We've got people from Atlanta, Charlotte, all over Florida moving to Charleston. So I think we've got the right culture, but we need to get investors to say, "Wow, there are different kinds of industries here." It's not just health care. It's not just automotive. A shared-mobility company headquartered on King Street is probably not known to a lot of folks. So I think we need more megaphones out there saying, "Hey, look at us."

I was guilty of that when we moved here. I was like, it's a cool tourist town with great food and booze. We are significantly better than that.

There was an article that came out recently that said if you want to grow a successful business, you can only pick three of these things. It was a laundry list of things, like work, family, friends, health. My wife joked, "Did you pick work twice?" But I didn't. I picked family, health and work.

I have great friends, but my friends also understand I'm probably the worst at returning a phone call or a text. I just believe you only have so much time. There's plenty of people out there who are like, "No, you can manage your schedule like X, Y and Z," and I just don't see it. So at this stage of our business, work consumes a massive amount of my time.

I want to be healthy so that I can be around longer for my family, and I want to spend time with my wife and kids. So if I'm not here or traveling, I'm with them almost all of the time.