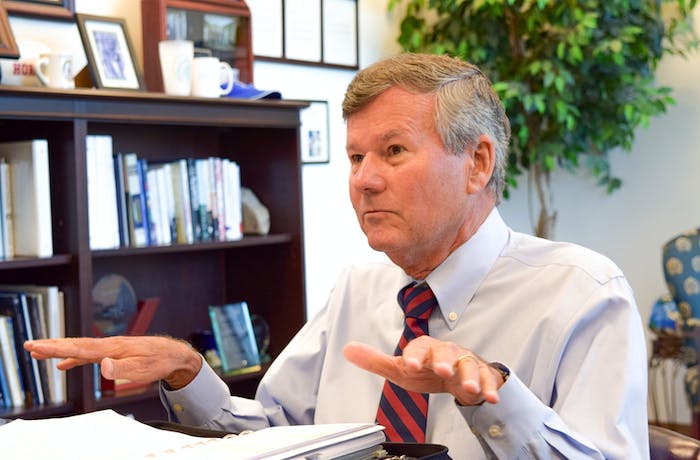 James Ward is executive vice president at Scientific Research Corporation, which provides innovative solutions to the U.S. government, private industry and international markets. Ward is based at SRC's Charleston location and leads a team of about 1,000 in the company's Integrated Systems and Solutions Division. He previously served as executive director of the Space and Naval Warfare Systems Command Atlantic (SPAWAR) in Charleston, which is now called the Naval Information Warfare Center Atlantic (NIWC).

When James Ward talks about management insights from his career in government and private industry, he points to two figures as instructional.

One is former U.S. Secretary of Defense Robert Gates. The other is his uncle's old hound dog.

From Gates, he learned how trust empowers people.

Ward recalls the second time the defense secretary visited SPAWAR in the late 2000s. The workforce was busy installing electronic systems on what was then a new generation of military vehicles. Known as MRAPs, which stands for mine-resistant ambush-protected, the vehicles were designed to withstand improvised explosive devices in Iraq and Afghanistan.

During the tour, Gates asked Ward, who was then SPAWAR's executive director, if they could talk privately in the back of an MRAP. Fearing the worst, Ward got in and closed the door.

"He said, 'I only want to tell you one thing,'" Ward recalls. "'I've been here twice now, and I know you guys are getting bombarded with people to make sure this is going right. I trust what you're doing here.'"

Gates also gave him a number to call if anyone got in the way of the MRAP program, Ward said.

And then there's the lesson on leadership from Alvin, a hound dog that belonged to his Uncle Hiram in Danville, Va., where Ward grew up.

Any time Hiram drove the car out of the driveway, Alvin ran out of his dog house to the street. The dog, who resembled Disney's Pluto character, waited for the car to turn left or right, and then ran ahead. When the car reached its destination – perhaps a relative's house or the grocery store – Alvin would already be there, waiting.

"Now my uncle, I don't even think he was high school educated. He worked in the tobacco fields. He always called you by your first and middle name. He said, 'James Dallas, Alvin ain't that smart. That's hound dog leadership.'

"He said, 'You'll find in life a lot of folks jump out in front like they're leading, but they're only watching where the crowd goes. Alvin's not leading anything. He's watching which way I go, and then he jumps out in front like he is. You don't want to be a hound dog leader. You want to make your own mark.'"

Over the years, Ward said, he has appreciated the wisdom in his uncle's words.

"It's caused me to think about how leadership involves personal risk," he said. "It involves taking a chance, getting out there when maybe the crowd hasn't assembled yet. That's what leadership's about. That's some of the best advice I've gotten: 'Don't be a hound dog leader.'"

We sat down with Ward to talk about leadership, technology and more.

You grew up in Virginia. How did you get to Charleston?

I was in the government in Virginia as an underwater acoustics engineer and worked in federal service in that regard. I would come to Charleston often times to work on the submarines when the Naval base was still here. I'd always go home and I'd say, "You know, if we ever moved anywhere, we might want to move to Charleston."

Little did I know that we were going to have the Base Realignment and Closure. It closed down the organization that I worked for in Virginia. One of the options was Rhode Island, and one of the options was Charleston. For my three boys and my wife, it was just a no-brainer. I came down for SPAWAR, to get SPAWAR stood up. That was back in the mid-90s.

How long have you been at SRC?

In your own words, what does SRC do?

I like to use the word "partner." Our principal business is being a partner with Naval Information Warfare Center (NIWC) Atlantic, formerly SPAWAR. We win competitive contracts, and we provide primarily engineering services to support the efforts that NIWC Atlantic has ongoing in the cyber domain, in the intel domain, in the communications domain, in the network domain.

What is the best part of your job?

I'm very fortunate in having a first-class team. That is so much fun, just having folks you can trust, depend on, cover for each other. When something goes wrong, we jump in. The best part is the team, not only here but the team in Atlanta, the owners, the corporate officers.

The other thing I enjoy the most is that I feel like I'm still doing a lot of the things I was doing when I was in the government. And I felt like every day in the government, I was able to make a difference to the young men and women serving this country in keeping them safer or more enabled to do their mission.

At SPAWAR and SRC, we don't do the kinetic stuff. We don't do the bullets and the bombs and all that. We provide systems that give them more intel and insight into where the bad guys are. We also provide things that would keep them safer when they're going into harm's way. It's neat to have a career of significance over there and here, where I know we're making a difference.

For example, you can imagine the challenge in Afghanistan, Iraq, all over the world where they're in tenuous situations, of verifying people's identity. For the bases overseas, that's a real risk nowadays. We've put together a system called Gatekeeper on the Move. You can have 20 folks walk through it in a minute, and there's a 99 percent confidence factor. We're using a variety of biometrics.

I know that's keeping the guys on that base safer because they're catching the bad guys before they get in the gate, even though they're disguised or whatever. It checks things like your iris. It's a dynamic situation where you don't touch anything. We use it on the way in and the way out. If a guy comes in and he's 50 pounds heavier, well, you must have something – or a really big lunch. I know that's keeping kids safer who are serving the armed forces for the U.S.

What is the hardest part of effecting change within an organization? How do you overcome it?

I think when you have organizational change, the real key is people have to understand why. Why are you doing this? Is it just because some admiral somewhere says change? Well, then that's not going to go very well. But if they can see why we're doing this – here's the why: We're keeping kids safer, more enabled. The why is the critical part.

Secondly, a lot of folks in this business are introverts. Stretch yourself. Become more extroverted in conversations, your interactions. Write hand-written notes. Do that kind of stuff. You want to get set off from the crowd in this business? I don't mean a text message or whatever else. Go do those things; it will set you off. The communication. The face-to-face stuff. Because that's rare in this business – having folks that can really talk and persuade and convince, not just over social media.

The third thing I would tell them, especially in today's environment, is as soon as you get out, think about what small business you're going to start. And start it, after you get your feet on the ground working somewhere. Go start a small business and bring those 10 other guys you knew in school that were really smart with you. Then you're in control of your own destiny.

So you have a lot more opportunity for folks in this area to work on either side, which is good. But it's also made it more competitive. The unfortunate thing is there's just not enough talent. But overall, it's been a really good thing because we're getting more capability in a quicker time and using different skill sets. It's giving people more options, and options are always good.

Today, we're doing agile software development in the government; you're doing agile software development in private industry and in commercial. You've got scrum masters in both places. You're doing model-based system engineering in both places. It's blurred the lines. It used to be that government developed a lot of technologies and it moved to the commercial side. Today, I see it even more the other way.

I love to play golf. Family is the biggest thing. We are very blessed, three sons, great families, seven grandkids.

What's a book you always recommend, and why?

I love the book "The Speed of Trust" by Stephen Covey. It's such a simple concept but really can make such a difference.

But the one that sticks with me is one I read recently called "Thomas Jefferson and Tripoli Pirates." It's by a guy named Brian Kilmeade. It's the story about how, after the Revolutionary War, the United States was very much indebted to France and other countries. They had funded the Revolutionary War. We had to pay them back. How are you going to pay them back? What we figured was we would pay them back with commercial goods. So, we started moving goods across the Atlantic, the Straits of Gibraltar into Europe.

The pirates of Tripoli, that are right there at the Straits of Gibraltar, had a different idea. They started taking our goods and capturing our crews. At that time was when Thomas Jefferson started the Navy and the Marine Corps. It's an interesting story about how Naval warfare was really born in this country.