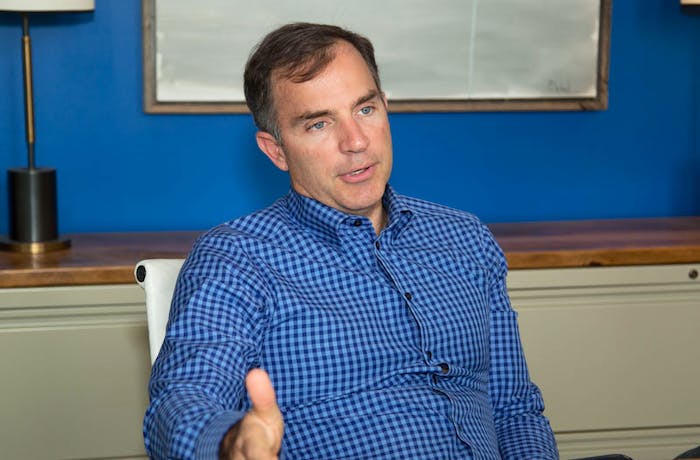 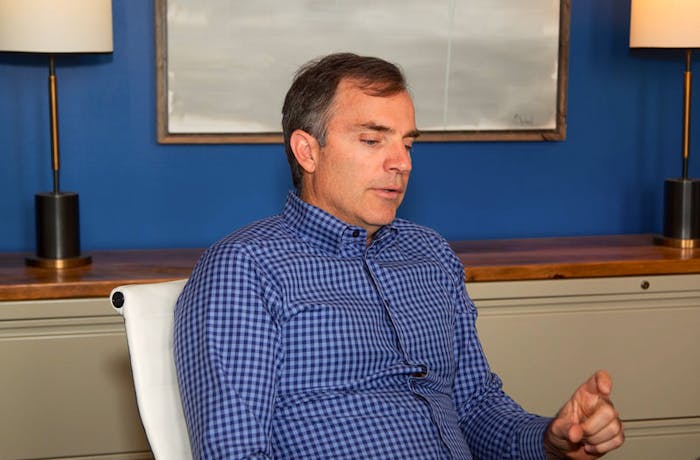 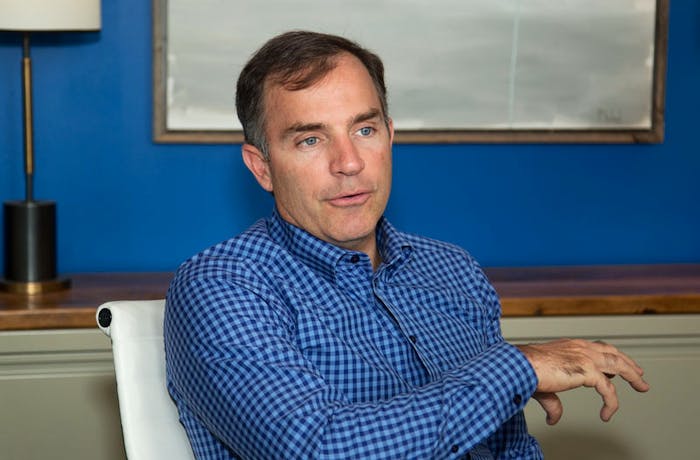 David Wise, a Charleston native, is founder and CEO of AVOXI, which sells virtual phone numbers and related software tools to companies globally. Wise started the company in 2001 in Atlanta and opened a Charleston office in 2015. AVOXI's main operations now are based in Charleston and Atlanta with other offices in Hong Kong; San Jose, Costa Rica; Johannesburg and Cape Town, South Africa; and Kingston, Jamaica.

We sell virtual phone numbers. A great example is Michael Kors, which sells pocketbooks and leather goods all around the world. They don't necessarily have operations in all those countries, but if you buy a pocketbook in China and you have an issue with it or you want to order another one, they take a phone number in China, and they ring it to their call center, which is probably in London. We give them those phone numbers and we deliver them to their contact center.

What segments do you focus on?

Hospitality and travel are big for us – hotels, online booking agents, airlines, tour operators – as well as consumer goods. We've also found software companies, people selling software as a service that thought they could do it without ever having to talk to anybody, are realizing that they have some big customers and they don't want to lose them.

I grew up here in Charleston, actually in Mount Pleasant. I went to Porter-Gaud through eighth grade and then transferred to Wando High School. I graduated from there and went to The Citadel. Got a bachelor's degree in business administration. Loved The Citadel. It provided a lot of great structure for me in my life at the time, and really a big challenge both physically and mentally, and it also built a lot of confidence in myself as well as in my ability to get out in front and lead people.

What drew you to your current business, or inspired you to start it?

When I graduated from The Citadel, I left and went to Colorado for nine months and worked in a ski resort and put my bachelor's degree to work doing nothing. But it was great. I decompressed from The Citadel. I went out there and made pizzas at night and rented skis during the day.

I left Aspen and came back to Charleston, and I knew I wanted to get into the business world. I had interned at SouthTrust Bank in Charleston when I was at The Citadel. They had openings in Atlanta. I immediately took off and went to Atlanta to look for some type of job in commercial lending or getting around businesses to learn more about how they work.

I had an opportunity to get involved with a startup at the time, this would have been '95, that had some technology in the communications space. What the company did was sell to the U.S. military communications services for mom and dad or children that were located overseas. They set up a distribution network to sell basic communication services to those folks, so they could call back home to the United States.

I traveled a good bit, and one of the things I saw was that there were a lot of companies setting up operations overseas. American companies setting up in Manila or in San Jose, Costa Rica, to have a branch of their company operating there to leverage the cost of labor or a time zone benefit. But the challenge they had was they didn't really have good communications options and were dealing with what I would say were lethargic, monopoly phone companies of the world.

In 2001, when that company was in the process of being sold, I exited and immediately started this business. We created some solutions to deliver voice-over IP communication services to those overseas businesses and started building a business on top of those solutions.

I saw an opportunity, and for me it was just kind of the right time in my life personally. I wanted to go build something and see if I could make a difference, see what I could build.

Did you have an entrepreneurial drive early on?

I think the driver would have been my dad. My dad was an attorney by practice, but he had a bunch of different businesses that he had run and started along the way. One of them was an oil distribution company out on Ashley Phosphate Road. I always saw my dad doing that. He always had his law practice, but he always had a business on the side. I think that was the driver. We do what our parents do, what we see them do. It was also kind of a confidence builder for me. A lot of credit goes to him. He was also a state senator in South Carolina, so he was a busy guy.

One of my first jobs was helping my brother and his friend set up what they called the Shrimp Shack. We sold shrimp along Palm Boulevard out on Isle of Palms. At the time I was growing up, you only had the Ben Sawyer Bridge to get on the islands, and there was no seafood store out on the islands.

The shrimp would just go flying out of the cooler. People came back from being on the beach and wanted to cook. That Red & White right across the street, the grocery store, they didn't sell fresh shrimp, or it wasn't very good.

That was the first entrepreneurial operation that I got involved in. My brother and his friend figured out where to get their product, how to keep it suitable to sell, bringing money in and paying and all that stuff. It was really neat watching them do that.

That I don't have to have the answers. Early on, I thought I had to have all the answers. I've really learned to use the people around me more, whether it's the people that work for me or my mentors and advisers. I really see my job as being a problem presenter to the people I work with, and even my mentors, not the problem solver. I've got some really great people who work for me who want to solve problems. We have 80-plus people today. I can't solve all the problems.

We'll really evolve the contact center capability. We don't see call centers disappearing. We don't see communications with consumers going away. The trend we are seeing today is being able to have multichannel communication – chat, phone call, email. People want all that interaction.

For the business side, it's how to optimize those interactions where they are professional, efficient and effective, where someone doesn't have to call back in or email in two or three times to get an issue resolved. The technology will use artificial intelligence to help identify miscommunication and dissatisfaction very quickly to eliminate churn in our clients' customers. There's a long growth path there for us.

How far is that from where your company started?

A long way. We started with just the virtual phone numbers, and we would just ring it in. Then people said, "Hey, can you put a recording and a message in front of the number when it answers? OK, great. Now, will you record the phone call for us? OK, can you send us the recordings?" That's been the evolution of our business.

I think fear keeps a lot of people from doing it. But there's not really anything to be afraid of. I think you gotta figure out your financial plan, and I think starting any business requires at least $50,000. But there's so many resources out there today – people that want to help entrepreneurs get a business started, be an angel investor or a seed investor to so many different ideas – that's really not a challenge. There are tons of organizations, especially here in Charleston, mentors and advisers and people that would help anybody. So probably the biggest misconception is they are alone, they don't have the support they need.

Surround yourself with one adviser or two advisers that have been there, done that. And work them like borrowed mules.

Commit to something. Find a company that's been around for at least three years and commit to be there for at least three years. One thing I look at on people's resumes is how many jobs have they been in in five years. For me, more than two jobs in five years is a red flag. It doesn't mean I won't hire them, but it begs the questions of stability, reliability, dependability and just a commitment to the effort.

And stay in Charleston. There's tons of opportunity here. You don't necessarily have to go to Silicon Valley to find other bright people to work with.

You see tech companies getting funded left and right to grow and expand their businesses. Some of them getting sold for some of their business ideas. I think it's fantastic for Charleston and for the tech community.

Do you see any challenges recruiting tech talent to Charleston?

We'll hire people that work remote, and we're always bringing them here and hoping they'll move here. But it's not a requirement. We have guys that work for us in Detroit, Boston, Atlanta. These guys all collaborate and work virtually.

Naturally, just because of the geographical size of Charleston, there's a limited pool of folks here. We're looking for people. We've got three or four interns that are working here this summer. We're looking at how to grow and develop those people for two years, three years, four years down the road. We're taking the long-term approach to that.

Do you have a morning routine or ritual?

I do pray every day. I ask for guidance and the power to kind of go do it. I spend quiet time every day, reflecting on what do I want to happen today and journaling.

In a business setting, every day, 15 minutes, 8 o'clock in the morning, we do a leadership check-in. Keep in mind we're not all sitting in the same office, we're all over the world, but we do a leadership check-in on strategic initiatives – does anybody have any hurdles related to the strategic initiatives they are working on – and then are there any issues with customers, vendors or employees.

I don't go to Starbucks, but I do drink Starbucks coffee. I drink their dark Sumatra.

I mentor with other people, meet with them during the week. I love that. I love when people ask for my input on something. Some of it has to do with business, some of it is personal.

"Think and Grow Rich" by Napoleon Hill or "How to Win Friends and Influence People" by Dale Carnegie. Lots of great takeaways. Those are like textbooks that you just study and read. The other one is "The Spirituality of Imperfection" by Ernest Kurtz and Katherine Ketcham.