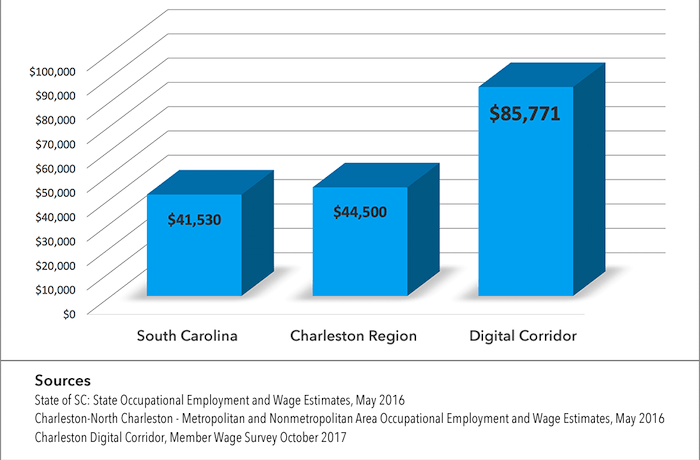 In its 15th annual Wage & Job Growth survey, the Charleston Digital Corridor is pleased to report an average wage of $85,771 for companies participating in the survey. This average is 2.07 times and 1.93 times the per-capita wage in the State of South Carolina ($41,530) and Charleston region ($44,500), respectively. In addition to strong wage levels, Charleston's tech economy is expanding with just over ninety-one percent (91%) of the companies reported hiring additional staff in 2017 and one hundred percent (100%) anticipating hiring in 2018.

As Charleston's tech economy matures, wage levels are consistently strong with local companies continuing to expand their employment and building footprints. Further, the rate of expansion from companies across the United States into Charleston is increasing and the talent pool continues to benefit from elevated levels of in-migration to the region.

The best validation of Charleston's business climate for tech companies is the national accolades the region has received in 2017. "Looking over our locally gathered data and accolades from respected national outlets including the Brookings Institution, Inc. Magazine, and Technet, Charleston's tech economy is firing on all cylinders," said Digital Corridor Foundation Chairman, Kirk King.

"We're proud to be a founding member and continued supporter of Charleston's growing tech community," said Peter Harrison, CEO of Snagajob. "Every day, we are fueling the growth of our recruiting and hiring platform for employers, tapping into Charleston's incredible talent pool. From an internal growth standpoint, in addition to our new corporate office in downtown Charleston, we plan to expand in the area by at least 30 percent over the next two years."

"As communities deal with the challenges of economic inclusion, the Brookings Institution's ranking of Charleston as one of only 11 regions to achieve inclusive economic growth that benefited a majority of workers of all races and ethnicities is the most notable," added Digital Corridor Director, Ernest Andrade.