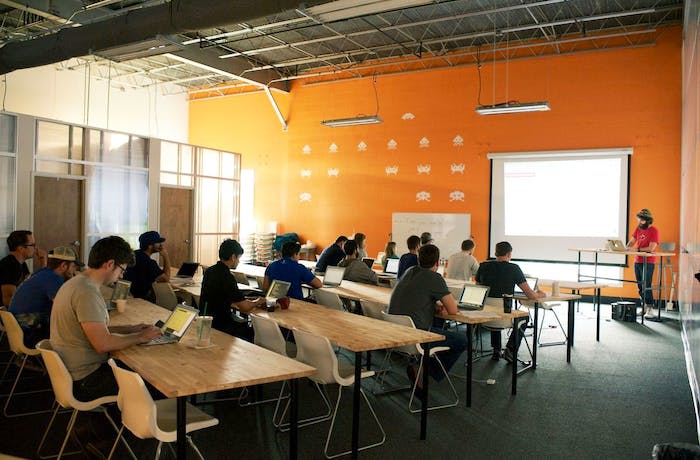 Peter Barth is confident that six months from now Greenville will have another coding school. He just won't be running it.

Barth, founder and CEO of The Iron Yard, a Greenville-based coding "bootcamp" and programming school, and the board announced in July that the coding school which once boasted 20 to 25 campuses stretching across the United States would cease operations by the year's end.

The announcement on the school's website called it a "difficult decision to cease operations at all campuses after teaching out remaining summer cohorts."

It was the second major coding school to announce it was closing this year. San Francisco-based Dev Bootcamp, launched in 2012 and later bought by Kaplan, will graduate its last class in December.

The Iron Yard's board included Barth; Eric Dodds, its chief marketing officer; and three representatives from the Apollo Education Group, a privately owned corporation headquartered in Phoenix that owns for-profit colleges, including the University of Phoenix.

Barth said he couldn't speak about the board's deliberations related to the decision to close or whether the board's vote was unanimous.

In recent years, Apollo has found itself entangled in growing financial issues, declining enrollment and lawsuits, USA Today reported. In a first quarter 2017 report, the company reported net revenue of $484.5 million, compared with $586 million in the first quarter of 2016.

First-quarter new degreed enrollment at the University of Phoenix was 20,200 and total degreed enrollment was 135,900, according to a statement, respective decreases of 17 percent and 23 percent from the same period last year. The statement also said operating income for the 2017 first quarter was $8.4 million, compared with an operating loss of $45.2 million for the first quarter last year.

Apollo was acquired in a $1.1 billion deal in February by the Vistria Group and Apollo Global Management, an unrelated company.

Barth said increased regulations did not play a direct role in the decision to close Iron Yard.

"I think just as an industry in general, for-profits were out of favor under the last (Obama) administration," he said. The attitude shifted, he said, when President Donald Trump took the Oval Office in January.

Former President Barack Obama in 2014 announced new federal rules targeting issues of cost and debt at for-profit colleges. But in June, the U.S. Education Department sought to freeze Obama-era changes that would speed up erasing federal loan debt of student borrowers, as reported by The New York Times.

A Coding Bootcamp Market Size Study for 2017, led by Course Report, found coding bootcamps expected to graduate nearly 23,000 students and grow by 52 percent this year based on responses from nearly 100 percent of U.S. and Canadian coding schools.

The $260 million industry is in its fifth year, and the number of bootcamp programs has grown to 22,949 students expected to graduate this year compared with 2,178 students in 2013.

He was a computer science major at Vanderbilt University in Nashville for a couple of years, but never earned a degree, instead dropping out his second year. When he left he became a stockbroker and later a software entrepreneur.

Barth and his family moved to Greenville almost 11 years ago, primarily for a better quality of life.

In Greenville, he became involved in NEXT, an arm of the Greenville County Chamber of Commerce, that plays an active role in the growth of knowledge-based companies in the Upstate.

Within a year of NEXT taking off, Barth took on a leadership role and co-led a number of projects, such as building the NEXT Innovation Center off University Ridge.

The Iron Yard started as a startup accelerator out of the NEXT Innovation Center. The company started in the summer of 2012 and the coding school came next in 2013. It later split from the accelerator in 2014.

The Iron Yard was not initially founded to open as a coding school, but it quickly became the first and only coding school in Greenville, and was one of the early coding schools in the Southeast and in the country, said 31-year-old Dodds.

In spring 2014, Iron Yard added campuses in Charleston and Atlanta. Three months later, branches opened in Durham and Houston, then another three months later in Orlando and Tampa.

"Economically, it never worked. It was so expensive," Barth said.

That left the Iron Yard with 15 in-person campuses across the country, including in Charlotte, Washington, D.C., Las Vegas and Nashville.

"Definitely kind of a surprise we ended up where we ended," Barth said.

Barth and Dodds waved off criticism of coding schools, a trend that followed as for-profit coding schools dotted parts of the U.S. in the last several years.

A Bloomberg article published last year, titled "Want a Job in Silicon Valley? Keep Away From Coding Schools," warned potential students from enrolling due to piling debt and lack of preparation for tech jobs.

Both Barth and Dodds said they're aware of the coding school criticism. Part of that, both said, stemmed from competitors that were small, unlicensed and unorganized.

There was also the sticker shock.

Most Iron Yard students were between the ages of 25 to 35 and were looking to transition out of prior careers, Dodds said.

Dodds said Iron Yard wasn't necessarily a replacement for a four-year college degree, but he said Iron Yard students were paying drastically cheaper per hour with more one-on-one time with their instructors.

Jose Vidal, a professor and undergraduate director at the College of Engineering and Computing at the University of South Carolina, has been teaching a senior capstone course to undergrad seniors for the past three years.

Most USC students in the College of Engineering and Computing start as freshmen, but the department does get transfer students from technical schools, he said.

In a senior survey taken in the spring, Vidal said most graduating seniors had job offers before graduation, with the median starting salary at $69,000. Others went on to graduate school.

Vidal said some seniors went to work at Google, Amazon or Microsoft, though the majority stay within a 100-mile radius of South Carolina, working in Charleston or Charlotte.

While the department doesn't survey corporations, companies Vidal has talked to at career fairs told him they are looking for traits beyond just programming skills, such as good personal skills and sometimes knowledge of business and accounting.

Whether he would recommend a coding school to a student, Vidal said it depends on the person, though he leans on the value of an undergraduate degree. Vidal has taken online classes before, and said he could see himself enrolling in coding school programs.

"You can certainly get a job without a degree. ... Half of the people working on software don't have degrees in computer science. That's always been true," he said. "It's always been the case that demand for programmers has exceeded the number of degrees granted."

There's no amount of coding to answer what's next for Barth, Dodds or the coding scene in Greenville.

As far as the concrete campuses go, Barth said a few Iron Yard employees will hang around until early 2018, but his or Dodd's next venture remains to be discovered.

"We will definitely be involved in the local entrepreneurial ecosystem," said Barth, who will stay on the boards of NEXT and ChartSpan, a successful medical start-up created out of Iron Yard. "I'm fully committed to Greenville," he said.

Dodds is, too. He closed on a home in Greenville in August.

"It really has been pretty cool to build a company in Greenville, and we love it here," Dodds said.

Barth said both have received several job inquiries, but all focus on major cities such as San Francisco and New York.

"Not interested. I want to be here," Barth said, admitting the reality, however, that most companies in Greenville are not looking for their next CEO or chief operating office.

Life after Iron Yard definitely brought a grieving period, Dodds said. But both said the positive feedback brought by current students and some of the roughly 3,000 alumni has been comforting.

"It's extremely sad and difficult, but I think that was a rare opportunity to look back and see the effect we've had," Dodds said. "... (It's a) privilege to be a part of it."

The Iron Yard expanded to Charleston in 2014. It set up shop near Shem Creek in Mount Pleasant before relocating to Princess Street on the peninsula.

While the Greenville-based operation is shutting down, other options will still be available in the local area for fledgling techies: JRS Coding School, founded by Jack Russell Software, now runs a boot camp in Mount Pleasant. And the Charleston Digital Corridor offers introductory code classes for adults and kids through its CODEcamp program.