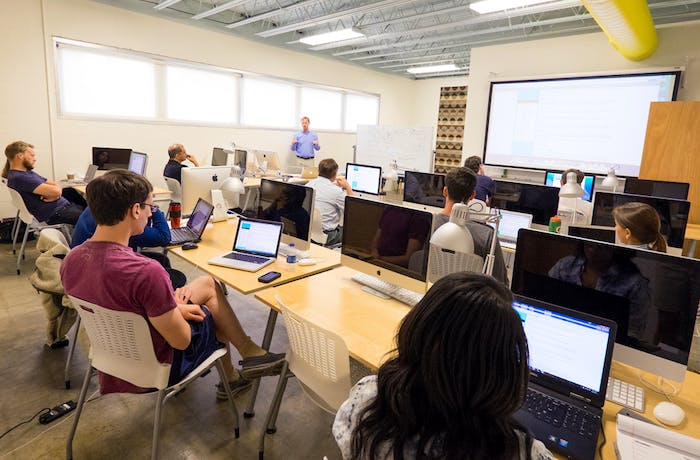 For around $10,000 and three months of time, the promise of a well-paying programmer job awaits.

That is the pitch of many coding schools. Most have similar business models: Students focus intensely for a few months, classes are typically taught by professionals, and graduates are deemed entry- or junior-level programmers ready for hire.

The U.S. now has around 100 coding boot camps, which are on track to graduate 23,000 developers this year, according to Course Report, which tracks coding boot camps. It is a $260 million industry today, the report said.

In the last year, 15 new schools have opened and six have closed, spurring debate over the need for and effectiveness of such schools. A notable closing came when Dev BootCamp said it plans to shutter its operations by the end of the year. Since 2012, the San Francisco-based school had expanded into six cities.

In an interview with Quartz, Dev Bootcamp President Tarlin Ray said an increasingly competitive market and the rising cost of hiring qualified teachers made it difficult to continue.

Closer to home, The Iron Yard said it plans to close its operations by the end of summer, including its Charleston site. The Iron Yard launched from within a tech-focused coworking space in Greenville in 2012. It has since expanded to 15 campuses around the country.

Students graduated from the 12-week course with the guarantee of a job within six months. The closure comes without much explanation. The company said in a statement that the decisions was made after "considering the current environment." Calls made to the founder were not returned.

"While our journey is coming to an end, we will always take pride in the thousands of people our staff helped to launch new careers," the statement said.

Only two coding programs designed for adults remain in the Lowcountry - JRS Coding School and the Charleston Digital Corridor's CodeCamp. This does not account for the region's coding camps for kids, or the programming degrees and coding classes offered at higher education institutions in the region and around the state.

"We would like to see our community full of expert developers, so we're not planning on going anywhere as long as the demand is there, and I think the demand continues to grow," said Tom Wilson, the founder and lead instructor of JRS Coding School in Mount Pleasant. "I see companies in Charleston literally posting hirings daily for software jobs, so we feel like this is still a pretty good spot."

Most students come to the JRS Coding School seeking a career change; some arrive after deciding college was not a good fit. One student is a rising sophomore in college who attended coding classes rather than finding a summer internship. All students thus far share the goal of becoming a developer and working in tech."From my perspective, if anyone wants to learn to code, we want to teach them and give them a good foundation for their career," Wilson said. JRS operates within the Jack Russell Software Innovation Center, an arm of Tabula Rasa Healthcare Inc. Wilson is Tabula Rasa's chief technology innovation officer.

Since launching last summer, the coding school has graduated 21 people.

The first two cohorts had 15 graduates, and 80% of them found coding jobs in the Charleston region within 90 days of completing the course. The most recent cohort ended a few weeks ago; job placement updates are not yet available for those six students.

"We feel like we're doing pretty good for the first year," said Wilson, noting that tuition revenues do not yet fully cover the school's expenditures. Wilson hopes to see class sizes grow to 20 students over time, helping to make the school profitable.

The course costs $10,000. While the expense and 12-week commitment could be barriers to entry for some, Wilson said the model also opens the door to people who cannot afford or do not want to attend four-year college programs. The next cohort launches Sept. 18, and another will begin in January.

The Charleston Digital Corridor also teaches people to code, but its offerings are weekly and at night to accommodate people with full-time day jobs. Since 2012, more than 1,200 adults have taken CodeCamp courses. Some students wanted to dabble with coding; others have gone on to work full time as developers.

While attendance has remained steady over the years, an 80% drop off rate occurred after the third course. Most students were not completing the more challenging courses in the sequence.

Responding to this data and changes in other offerings across the Lowcountry, Ernest Andrade, executive director of the Digital Corridor, decided to revamp the coding program.

This round of CodeCamp launched a few weeks ago with 11 students. They meet every Tuesday night for 2 1/2 hours for two months. It costs $495, and students who continue on and enroll in the JRS Coding School get $500 off their tuition there, Andrade said.

Andrade said the Charleston market is performing well with supplying entry-level talent to the tech sector, but gaps remain in finding enough senior-level programmers and managers.

Nina Magnesson, BoomTown's catalyst for citizenship and social innovation, said Charleston needs more coding courses offered at night and at lower prices to accommodate those working full time or those who cannot afford a $10,000 coding school.

She also wants to see a bigger focus on training of junior-level developers to become more advanced. She said that newly trained coders need real-life experience but that it can be a financial burden on a company to hire a new programmer and invest the time and money into giving them that practice.

"We still have that 18-month gap where BoomTown can't afford on its own to hire a junior-level developer that just graduated from Jack Russell or Iron Yard necessarily and ramp them up so they're actually billable hours," she said.

She wants the state to fund apprenticeships and internships at tech companies, enabling midsized software firms to hire greener programmers and then provide them more in-house training. The state, readySC and technical colleges run a similar training program for manufacturing positions, massaging the curriculum to fit each company's specific needs.

A Charleston-based startup looks to fill some of those workforce training gaps. Carolyn Finch, Amy Piazza and Suzette Bussey founded Powerhouse in spring 2016.

The firm teaches women to code over six months, and then assists them for another six months with finding contract work with Charleston tech companies, or with Powerhouse. The goal is to get students experience in the workplace, in the hopes of those jobs becoming long-term.

Classes often take place in the evenings and in employees' homes or in their Broad Street office. Flexibility is key to getting more women in the mostly male-dominated tech sector, said Piazza, Powerhouse's chief technology officer.

The first cohort had three graduates; two have jobs under contract with Snagajob, and the third decided not to pursue coding. One student who briefly came to Powerhouse now works at LinkedIn.

"Until you actually get the work experience, companies really don't want to hire you," Piazza said. "So, we did that first step. We give you the job and help you build your portfolio and your experience levels, and then you're more marketable to other companies."

Powerhouse does not charge for services until students are employed. Students then pay 15% of their salary each month until they pay the $12,000 owed for coding courses and job placement services. The next cohort will launch this fall.

Wilson said coding schools overall have a place in the tech workforce development landscape, alongside higher education institutions' offerings. He said the 12-week model has proved to be the most successful among coding schools.

While people can teach themselves to code and free resources are available online, Wilson said the coding school model offers uninterrupted time to intensely focus on learning how to code –- something that can be hard to fit into a daily schedule.

"As someone who has been training developers for a long time, for over 30 years, the formula that I see work the best is to have a foundational process of absolute focus on learning to code for a period of time to build that proper mindset on how to solve problems with code. ... It's a challenge to learn to code, and you want to set yourself up for success."