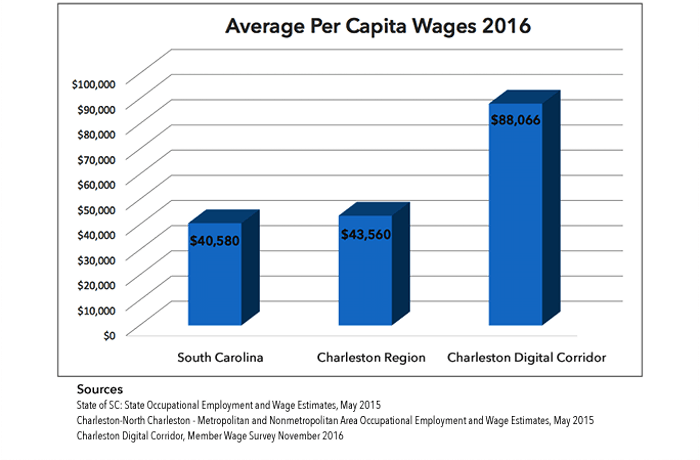 In its 13th annual Wage & Job Growth survey, the Charleston Digital Corridor is pleased to report an average wage of $88,066 for companies participating in the survey. This average is 2.17 times and 2.02 times the per-capita wage in the State of South Carolina ($40,580) and Charleston region ($43,560), respectively. In addition to strong wage levels, Charleston's tech economy is adding jobs with just over 73 percent of the companies reported hiring additional staff in 2016.

Charleston's overall economy is showing per-capita wage gains above the national average with the regions robust tech and advanced manufacturing economy contributing handsomely to these gains. In its 2015 Best Performing Cities year-end report, the Milken Institute reported that while the regional per-capita wage grew 5 percent above the national average between 2008 and 2013, the regions burgeoning tech sector grew at a rate of 16 percent during this period.

"As the largest public software company headquartered in Charleston with over 1,300 employees in the area, we know the Lowcountry's 'Silicon Harbor' continues to be a great lure for top tech positions," said Blackbaud's Todd Lant, vice president, Information Technology. "In 2016, we hired 120 new jobs into Charleston and we anticipate that we'll add over 500 new hires globally in 2017."

"While our overall economy is benefitting from the strong wage levels in the tech sector, our community is producing tech talent at an unprecedented rate thanks in large part to the steady execution and iteration of our long-term talent strategy" said Charleston Digital Corridor Foundation Chairman, Kirk King. "