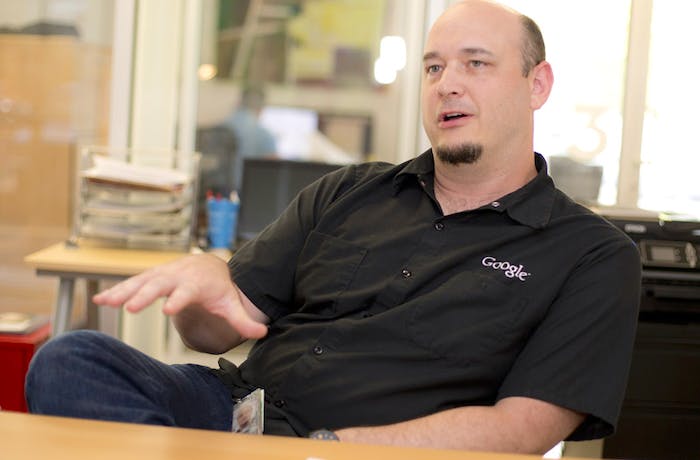 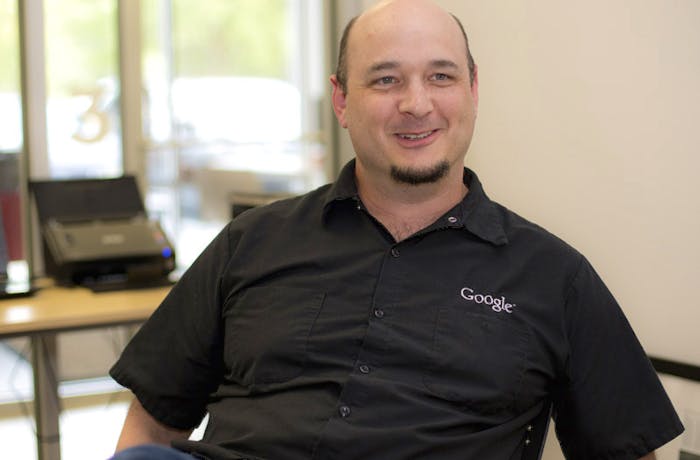 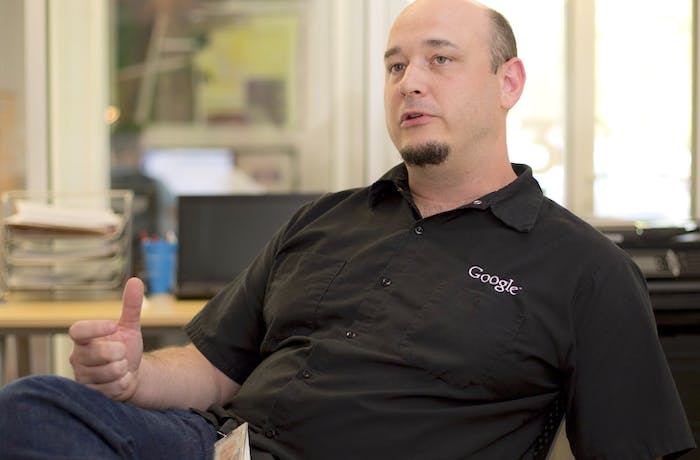 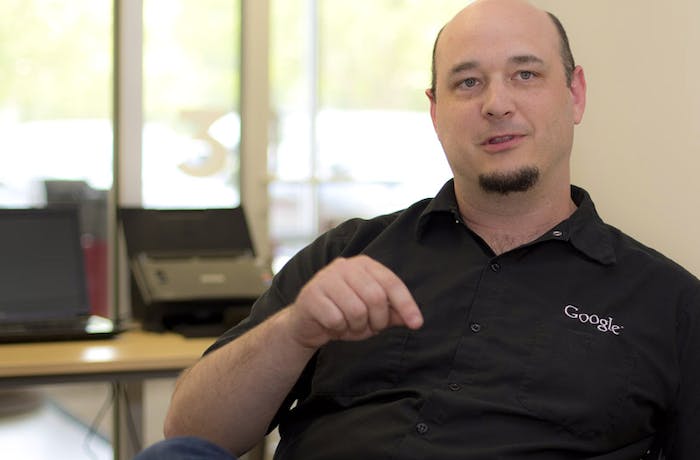 The Charleston Digital Corridor's Leadership Profile series is focused on the individuals who are driving Charleston tech scene forward. This series is brought to you with support from Charleston Southern University.

Where did you grow up? What was life like there?

When I was in England, the first Gulf War was fought. The Irish Republican Army was bombing the city of London, where I was going to school. I learned that the rest of the world is not the same as what most American kids grow up knowing. It was a good experience, but it made me grow up quick.

At my previous job , I worked for a government contractor in Alabama, building supercomputers for the Space and Missile Defense Command, a part of the US Army. In 2007, I saw the lay of the land changing. So I started looking around and I ended up here at Google because it's the only place that has big "toys" on par with the government.

Probably the most memorable job I had early on was my second job. I got hired to do technical support for a coffee-shop-slash-internet-café. What can I say? It was in the early 90s. The woman who hired me, her name was Joanna. I was like, employee No. 7 of this company, so it was a super tiny group. I remember that she hired me for this job, and I didn't really know anything about working with Macintosh computers, and that's what it was. She kind of threw a computer at me, said, "Here you go, figure this out."

Years later, when I started at Google, I was out in California for the first time, sitting in my boss's office, and she walks in with her bicycle. I was surprised, "Joanna?" She's replied, "Eric, nice to see you. You work here?" I said, "I do now." And she said something that sticks with me even now: "I figured you'd make it here sooner or later." So never burn bridges, that's my advice. You're never quite sure who you're going to bump into again from your past.

I've always known that I wanted to do what I'm doing. I knew I would be good at technical management. It's what my father did as research and development director for Proctor and Gamble and it's what I aspired to be.

I'm feel I'm pretty good at seeing the landscape and seeing how things naturally play out, so I can give good guidance on what it takes to get something done. I'm good at seeing the roadblocks and the chess pieces as they move around, usually like five or six moves ahead. So it's an entrepreneurial skill, but I'm not an entrepreneur. I really like working for a large company because I can have massive impact.

Google strives to organize all the world's information. My group is focused on building, running, operating all of the IT infrastructure inside of our massive data centers. There are 15 of these large facilities all around the world and they are big: These places are where you have buildings the size of a Super Wal-Mart just full of computers. And not just one, but often multiple buildings.

In other words, we are the ones who physically make Google exist.

Our site is in Berkeley County one of the bigger ones in the world. It's about 500 acres, give or take.

I liken Google to grad school, but you get paid more. Functionally, we treat the facility like a giant $1 billion experiment where we've got a system and we want to make it better – how do we collect the data to make a decision to tweak the knobs a certain way to have a better outcome? Everyone comes to work with the mindset of, "What is it I need to do today to make things better?"

It's a very collaborative environment, with people talking about and brainstorming ideas. People get excited about some things and not about others, so they'll contribute in different ways. At the end of the day, we end up with a bunch of really excited engineers with some really great ideas.

**What is your management style? **

My natural management style, I have learned, doesn't work all the time. I'm a very Socratic kind of person. So someone will come to me and say, "I need your help with blank." And my response is often "OK, well let's talk about blank." I'll just ask lots of questions, hopefully to teach them how I think to help them come up with a conclusion on their own.

The lesson I've learned is that, sometimes, that's a very exhaustive exercise when someone wants or needs a simple answer. I've worked hard to categorize what kind of feedback from me they want before I start answering. Example: "Do you just want me to tell you what I want you to do? Or are you seeking my input? Are you just brainstorming?"

That little tweak has actually had probably the biggest impact on engagement with my team.

Complain up, not down. I had a manager once who, during my first one-on-one, told me they were being actively-managed by their manager performance-wise, and that the company didn't understand what they were trying to do. Not the most comfortable situation on your third day when you never met the person before. It can be hard to avoid complaining, so you need to learn to complain the right way.

Probably some of the best bosses I've had are very direct and supportive. Like if you have something that's wrong, they're like, "Look, here's a problem. Here's what the issue is." Giving critical feedback is hard. It's really hard for people to be direct and honest. I've learned to be willing to talk about things and not just circle around.

**Do you have a routine that's important to your day? **

I like going home and spending time with my wife because Google is a place that can absorb your entire life and then some. I try my best to truly separate work and life.

I can teach almost anyone how to use computers or our technology We build all of our own internal products. You can't go buy a Google server. You can't go buy a Google networking device; they don't exist outside of our walls. Therefore, it's not a skill set that someone's going to have. No matter what, you have to find someone who's passionate about learning and development, because without that they're just not going to be successful at Google.

Another major criteria is executing in a world of ambiguity, as our world is not well defined. The speed at which we move internally is astounding. We've designed entire lifecycles of hardware and thrown them out before a similar product shows up outside of our four walls. If someone comes in and says, "I need a cookbook every single day to be successful," they're not going to make it. It's about finding the people who work well with poorly defined rules.

What is your biggest pet peeve in business or amongst colleagues?

People not willing to be direct and honest. And people who aren't able to accept and address constructive criticism; People who are so sure of themselves are just one blindside away from something going horribly wrong.

**What advice would you give aspiring entrepreneurs and to new graduates looking to work in the tech industry? **

Good example, if you get on a plane to fly somewhere, you have a choice to make – do you put earphones on, or do you have a three-minute conversation with the person next to you on the plane? Most people put their earphones on just to zone out. But you're making a conscious decision to pass by a truly captive audience for three hours. I'm not saying that you're going to harass them, but they might have some really interesting things to talk about. And maybe they need someone just like you to work with or for them!

I am definitely Android. My friend handed me an iPhone this week and asked me to change his picture and I had no idea. Mac or PC? And you forgot the other option, Linux, which is also a good choice. The answer is yes to all of them. I have a Mac desktop, Mac laptop, PC desktop, PC laptop, and multiple Linux and BSD servers. They're all tools in the toolbox, used for different things.

Sadly, it is a mocha, even though I know it is really, really bad for you.

I have a couple of alter egos. I build and run race cars. I do a form of racing called Rally. Imagine that you strip out all the interior stuff out of a car and then you put in a cage to protect you. You have a seat for yourself, the driver's seat, and you have a seat for a passenger. Then you take this car and you drive closed roads, such as say, the Francis Marion National Forest, at like 100 miles an hour. Your co-driver has notes describing what the road is like. You're driving as fast as you possibly can. You're racing the clock. Whoever is the fastest person against the clock is the winner.

I also build and restore bizarre imported vehicles. I brew beer. I play video games. I go on vacation with my wife. I clearly have too many hobbies with too little time.

Mixed. From a labor market perspective, Charleston is pretty good for our entry-level roles, but we have had some challenges for our senior positions. Sadly, none of my current managers on my team were hired locally, but thankfully most of my entry-level folks have been hired here. They've got the skills for that coming out of the schools and businesses in the area.

From a marketing perspective, among all the other data center locations, this is an easy place to market for because, well, it's Charleston. After all, the quality of life is excellent.

Night and day from where it was. Eight years ago, I met Ernest Andrade, director of the Charleston Digital Corridor, when he was in the old facility above the Enterprise car rental on Meeting Street. I had a lot of skepticism. I was thinking, "What are we doing here?" Then I met some of the incubator tenants and realized "OK, this might work out."

A few years later, I remember, as a member of the Charleston Digital Corridor Foundation board, we met with the College of Charleston to talk about developing the computer science program and indicated that they needed to invest more in the CS program. "If you produced hundreds of CS students every year, they'd all get jobs in Charleston." At the time, they didn't see it that way. Well, here we are, years later, and we can see this happening.

In short, I feel like we read the crystal ball correctly. There still needs to be more effort by the local colleges. There still needs to be a little more momentum in getting some more output of the other schools in the region to meet the market demand. I think things are progressing well, but it's easy to get comfortable and confident, and then things will slip. We're better than where we were, but there's still plenty to do.