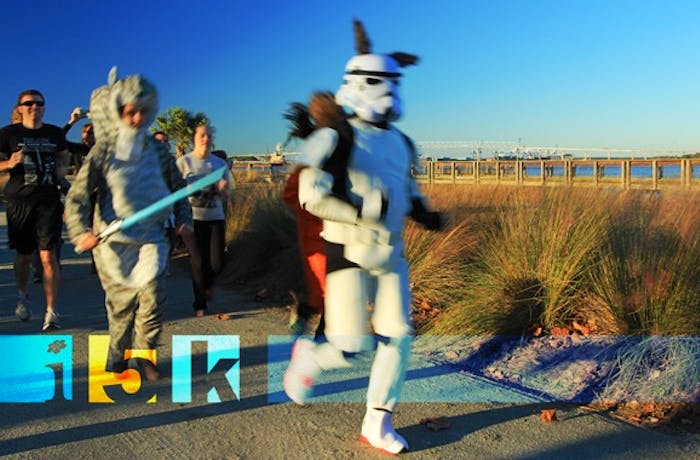 The Charleston Digital Corridor, along with title sponsor Benefitfocus, is pleased to announce the 2016 Innovators' 5k (iFive:K) to be held at Riverfront Park on April 14th, 2016. Proceeds from the annual race benefit the Digital Corridor's CODEcamp scholarships and other education programming. Confirmed sponsors include Charleston's fast growing tech companies, such as BoomTown, Blackbaud, Blue Acorn, and Google

The Digital Corridor's iFive:K has become a favorite athletic and networking event for Charleston's tech community. As one of only a handful of evening weekday races in the region, the iFive:K typically sells out in just a few weeks. Registration for the iFive:K officially opens today.

"A big part of the Charleston Digital Corridor revolves around community – connecting people so that we can help each other grow and foster new talent through CODEcamp," states Kevin Eichelberger, Founder & CEO of Blue Acorn. "As the proud winner of last year's SPIRIT award, Blue Acorn is thrilled to serve as a shining example of what it means to support the effort, and we look forward to passing the torch to this year's most spirited competitor."

"It is awesome to see our tech community come together for a fun evening of competition and networking while supporting the further development of talent in Charleston," said Digital Corridor Director, Ernest Andrade. "The 10th year is the perfect time to take our annual iFive:K to the next level."

"Benefitfocus is proud to sponsor the 2016 iFive:K. We value the initiatives the Digital Corridor is working towards and we're excited to be part of the energy that is attracting top technology talent to the Lowcountry. More than 150 of our associates plan to participate in this year's event. It's a great opportunity to talk technology with other innovators in the Charleston region," said Nina Sossamon-Pogue, Vice President of Media at Benefitfocus.

About the Innovators' 5K (iFive:K): The iFive:K is an annual event that brings together Charleston's tech community for an evening of spirited competition and networking. Proceeds from the iFive:K support CODEcamp scholarships and other education programming. More: ifivek.com