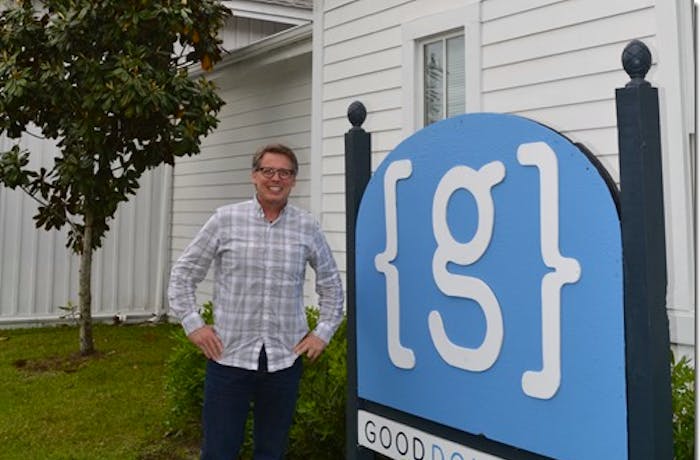 That's how many times Good Done Great has relocated its Charleston operations since 2012 –- and it's not the only Charleston tech company to have to make multiple moves.

Good Done Great President Earl Bridges started the software company in 2008 from his Daniel Island home along with company CEO David Barach, who runs the Tacoma, Wash., office. They created software that would make charitable giving easier for employees at Fortune 500 companies like clients IBM, Monsanto and Staples.

Bridges looked at space at the Charleston Digital Corridor in 2012. He moved in that day and hired his first employee that week. The company operated out of five different offices altogether within Flagships 1 and 2 in downtown Charleston before relocating to a 2,500-square-foot office on Daniel Island.

"I remember walking in and thinking that space was way too huge," Bridges said.

The company outgrew it quickly, however, and now employs nearly 30 people in a 6,000-square-foot former church building on Rutledge Avenue. The company ripped out the pews, put down desks and got to work. Coders work a few feet away from the baptismal pool.

As the company seeks to raise $2.5 million, Bridges said investors want to see the company spending money on product development, not rent.

"When you're first starting, you have big ideas but you are not sure exactly how big this thing is going to get. ... The hard thing about it is: Buildings are static and the company is growing at a rate that's dictated by how successful you are, and you never know what that success will look like," Bridges said. "It's like jeans on growing teenage boy. They fit at first, but soon they are too short."

Some tech startups in Charleston are hiring faster than anticipated and end up having to move into larger spaces year after year. Several tech company CEOs want to see shorter lease terms –- preferably one year –- and expansion options like renovated warehouses or developments with vacant buildings nearby.

Bridges said the Digital Corridor's Flagships 1 and 2 are great options for startups to move in quickly and add employees. It's once companies get to the range of 20-plus employees that options become more limited, according to several startup founders.

Blue Acorn founder and CEO Kevin Eichelberger said startups want open floor plans, "cool spaces" and one-year leases. "Like the Digital Corridor ... it's great as an incubator, but beyond one to two years, lots of growth-mode companies need something bigger," Eichelberger said. "To commit to three years of office space when your fate is determined every quarter makes it really hard to decide how large your space should be."

As a co-founder of The Harbor Entrepreneur Center, John Osborne has launched co-working and accelerator office spaces in Summerville, Mount Pleasant and downtown Charleston. He said buildings with expansion options or movable walls would benefit growing startups as they quickly scale up or downsize unexpectedly.

It's a bit of a gamble for the developers, landlords and startup founders. If developers build expandable spaces with tech companies in mind, they could lose money if they are not at capacity. Landlords could lose money with shorter lease terms as they seek new tenants after a growing company moves out.

Startups do not want to –- and often cannot afford to –- spend more on space when they do not yet have the staff to fill it; but they also want new space quickly when adding employees.

Peter Fennelly, a principal with Colliers International – Charleston, said commercial real estate professionals understand that tech companies want to move quickly when growing, but he said landlords and developers want to ensure a return on their investment through multiyear tenants.

Fennelly said tech companies that want extensive renovations should likely expect to sign a longer lease and wait more than six months before moving in. Spaces that are move-in-ready in high-demand areas like the peninsula are quickly absorbed. Supply is scarce, Fennelly said.

"If someone wakes up in the morning and wants to take space that day, it's not that easy. That's the nature of the business," Fennelly said. "Sometimes tech companies are trying to move so fast, it's hard for them to take the time to see that it might take six months of planning to get into the space. To make it really work, there has to be understanding and flexibility from both parties."

"We were growing faster than our space would accommodate," Eichelberger said.

Blue Acorn is now run out of a 12,000-square-foot building at 145 Williman St., part of Raven Cliff Co.'s Half Mile North development. The company will expand into a neighboring 8,000-square-foot warehouse this year.

"Early on in a startup, there's a lot of risk. ... From my standpoint, we could have been a niche agency and stayed at a few employees or grown a lot," Eichelberger said. "I wanted short-term leases and small spaces. I wanted to be conscious of cost as a startup."

Fennelly said developers want to create more opportunities for Charleston's burgeoning tech economy through mixed-use developments, like Half Mile North, the corridor's planned Flagship3 or the city of Charleston's planned tech district, all on the upper peninsula.

"Buildings are full; vacancies are tight. That's a sign of a strong economy in Charleston. The tough part is if you are starting a company or growing one, you find limited options," Fennelly said. "I see opportunities in our marketplace for more people to take old industrial buildings, reconfigure and recycle them and turn them into something creative."

Good Done Great will remain in the downtown church building for about a year until moving into a 14,000-square-foot space in the former DwellSmart building off Morrison Drive. With its acquisition of Give.com, Bridges hopes to roll out what he's dubbing a "401(g)" program for employees, a personal savings account similar to a 401(k) but with funds going toward donations instead of retirement.

Bridges expects the company to add about 35 positions by the time it relocates to Morrison Drive and 144 jobs overall by 2019.

"Here's the problem with commercial leasing in South Carolina. We're finding everyone wants a five-year lease on their property. ... When we started five years ago, we fully thought we would still be working out of our home offices by now," Bridges said.