Shaping – and Being Shaped by – our Places 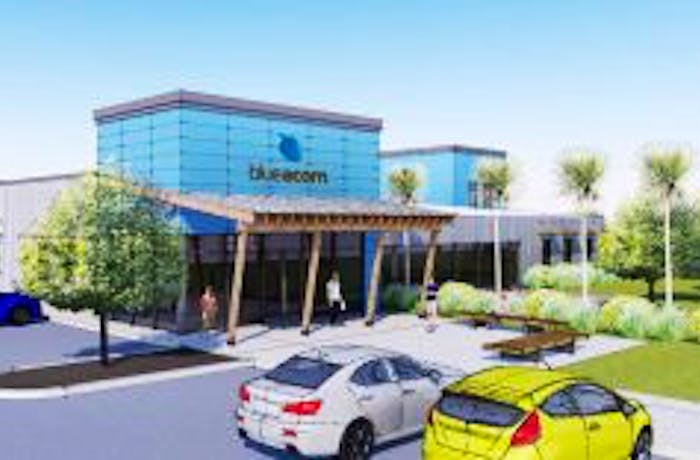 You have to be agile to grow a technology company these days. That much is certain.

Merriam-Webster defines the word agile as: "the ability to move quickly and easily" and "quick, smart and clever."

Anyone familiar with Blue Acorn's rapid growth in the Charleston area over the past decade would agree that founder and CEO Kevin Eichelberger has been quick, smart and clever in growing his company to its current level.

But Eichelberger would be the first to admit that his ability to move quickly and easily doesn't necessarily extend to literally moving the entire company to new office space on a frequent basis.

"Five offices in six years," he said. "That's a lot of moving, and I'm really getting tired of picking up and transferring everyone to new space so often."

Hence the new Blue Acorn office building, located in the urban renewal project dubbed Half Mile North, which broke ground last year and will be completed before Summer starts.

Winston Churchill once said that "we shape our places and then our places shape us." He likely was referring more to geographical areas and homesteads than to office space for tech companies, but the point is well made: Our environment matters, and our successes, to some degree, depend on our ability to make the space we occupy both work for us and enable us to work.

So it has been with Blue Acorn. Starting 6 years ago with three people in a 450 sq.ft. space in Mount Pleasant, the company expanded a year later to 1200 sq.ft. and 11 people. Eichelberger later moved the company downtown to a 3100 sq.ft. office and doubled his staff. As of today, Blue Acorn includes 62 employees and has added another 2000 sq.ft., with the sales and marketing team housed in an office at the Charleston Digital Corridor's Flagship building.

Eichelberger expects his staff to total about 100 by the end of the year, and with that growth trajectory, he'll need twice the space he has now.

He chose Half Mile North – so named because the location is a half mile north of the overpass going to the Ravenel Bridge – which consists of several renovated warehouses and buildings that will be part of a mixed-use community on the upper peninsula.

The move will give the company more than double the space – about 12,000 sq.ft. – with an option to take over adjacent space of 6000 sq.ft. in two years. The timing, Eichelberger noted, will be perfect.

"This will give us time to let the dust settle and work on our growth and processes," he said.

The building will accommodate four agile pods set up with 10- to 12-person teams, each with a "general manager" type leader. Eichelberger calls the setup "highly collaborative while providing for accountability and flexibility."

He pointed out that the areas will be open within the teams, but the teams will be separated by walls to lessen the distraction.

"It's a balance of openness with a distraction-free environment," he said.

The building project – managed by Stephen Zoukis and Michael Wooddy of Raven Cliff Company and master planner/interior designer Jacob Lindsey of Fabric Urban Design Office – incorporates many elements of recognized agile workspace, including a focus on creativity, collaboration and innovation.

The design will bring the environment into the space – another agile workspace element – with an abundance of live plants, skylights, lots of windows and an overall "natural" feel to the building.

Eichelberger insisted on three key components in the design: comfort, function and efficiency.

Function and efficiency were covered in the agile pod setup as well as with infrastructure (located near bike paths and bus routes), ample parking and meeting rooms with full-wall white boards. He delivered comfort effectively with such amenities as comfortable casual furniture along with formal seating, adjustable-height desks, motion-sensor lighting that each team controls in its area, a full kitchen with a bar and "kegorator," showers, an outside courtyard and a dog park.

Eichelberger will be part of a panel at the upcoming Dig South festival on "Your Future in Space: Meeting Your Workplace Needs When You Don't Know What You'll Need Tomorrow" – a session designed for rapid-growth entrepreneurs who aren't sure if and where they should rent or build.

Blue Acorn has also fulfilled the real estate agent mantra of "location, location, location" by positioning itself in a manner similar to the City's Horizon District, a mixed-use area being developed on another area of downtown in conjunction with the medical community. In this case, the upper peninsula's Half Mile North includes tenants SIB Development & Consulting and Edmund's Oast, a brew pub founded by the same people who started the Charleston Beer Exchange in 2008.

Although Half Mile North is not limited to tech companies, its location will be close to the Corridor's third Flagship building (FS3), located at 999 Morrison Drive, due to be completed in 2015. FS3 will be restricted to tech companies, following a City ordinance that places that property and the adjacent property at 995 Morrison Drive in the Tech Corridor Overlay Zone, intended to enable high technology and technology-related industries to anchor new development in the district.