Shawn Jenkins of Benefitfocus: A C.E.O. Is Like a Flight Instructor 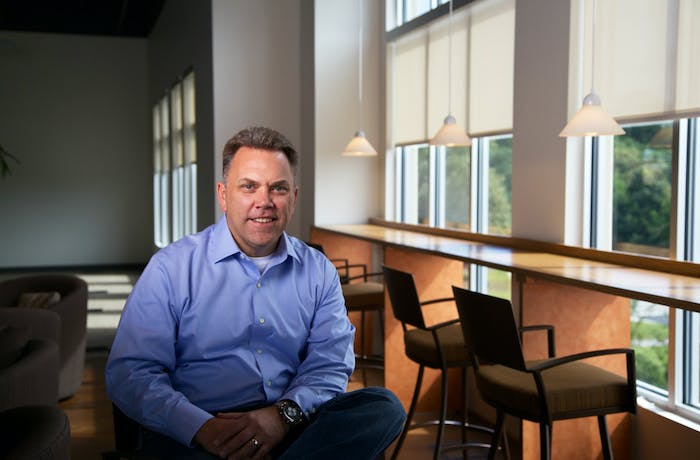 This interview with Shawn Jenkins, chief executive of Benefitfocus, a benefits technology company, was conducted and condensed by Adam Bryant.

When you were a child, were you in leadership roles or doing entrepreneurial things?

I'm a single-mom kid, and my mother was a real estate agent –- her pay was based 100 percent on commission –- and we didn't have much money. I don't want to overplay that; everybody's had to deal with things in their lives. But I do think about this a lot. Even in the speeches I give to our staff, it comes out –- this sort of survival instinct that we needed to have in our family.

So, whatever leadership I might have had as a kid was probably shaped a lot by a sense that, "We have to work in this family, and things have to go really well today for tomorrow to be pretty good." There's no doubt that a fair amount of my willingness to step out and do something uncomfortable, which is an aspect of leadership, is born out of that necessity.

So what kind of jobs did you do outside of school?

****I grew up in Daytona Beach, and as a teenager, I worked on deep-sea fishing boats. I was the third mate, then the second mate and worked my way up to first mate. It was hard work, and a bit dangerous, but it was immensely fun.

There'd be times when we'd be done fishing and heading back to the dock, and the captain would want to take a break. I got to a point where they would let me drive the boat. When I got my hands on that wheel, and the captain would go downstairs, and I was standing there by myself and driving the boat, even for 10 minutes, it was thrilling. It was addictive. I thought, "This is what I want to do." In a sense, that's what I am today. I like having the responsibility, and if something goes wrong, I'll be held accountable. I'd rather be the one who picks the direction.

Other lessons later on?

I enrolled in an aviation program in Pennsylvania. I really enjoyed flying, and I learned a lot from the people who were testing my skills. One time, I was taking my check ride with someone from the F.A.A. to fly a twin-engine plane. In these kinds of tests, they do all sorts of things to see how you react to different problems, and you have to cope with them. I was probably 22; the test wasn't going well. I had passed every test before then, and I thought I might not pass this one. I got mad at myself, and I got mad at him. "Let's just go back," I said. "This isn't working."

I didn't pass. After we landed, he said, "Now tell me what went wrong," and he talked me through the whole thing. He didn't discourage me; he didn't beat me down; he didn't make fun of me. But he didn't let me off the hook, either. He said, "If you want to be a safe pilot, that can't happen again, ever."

In the work we do now, there's a lot of pressure. And my leadership style with people is to be like a flight instructor, if you will. We're both going to fly this plane, because there are two sets of controls. I've got to be willing to let you fail a pretty good amount, almost to the point of danger. You don't yell at people, and you don't pull the yoke away from them. The people who imparted a lot of wisdom to me never touched the controls. They kept letting me fly the plane myself, and just gave me little nudges.

How do you hire?

****I'm mostly fascinated with people's stories. I'm really interested in where people grew up, and maybe the teams they played on. I'm very interested in why they left their jobs. What I'm mainly listening for is: Does this person believe things are happening for them, for a positive reason, regardless of what actually happened? Or do they believe that things are happening to them and against them? Do they hold a grudge against events, or do they believe they were a gift?

I'll listen for whether they say things like, "I'm so glad that actually happened, because I learned this and this." Or do they believe that there's sort of a conspiracy out to harm them? Because if you work for me, you're either going to think I'm here to help you, regardless of what I do, or you're going to think I'm here to get you. I really don't want the latter.

I'm also looking for people who have had a string of successes, whether it's in sports or writing or a photography contest or whatever. People who know how to win will end up winning with us somehow, and make our customers win. Those are the main things I spend time on.

What kind of career advice do you give to college students?

****I counsel people to take a year, if they can, and do something in the nonprofit world. My experience out of college was invaluable. I was helping people who have less, and money wasn't the object for me. We sent medical and construction teams to countries like Haiti, Guatemala, Jamaica and Kenya.

Some people get into their careers too quickly, and they miss the basic context of humanity, this sense that other people are struggling with life sometimes. You have to be able to know how to deal with that and pick up on that, and you have to put their needs before yours, even if they can't give you anything.

Some of the most well-rounded people I've known have taken some time to help others. So my advice is to create for yourself a window of time where you learn about people and where money is not the objective. It will be a foundational benefit to you, whatever you end up doing.