Distil Union Announces the Immediate and Worldwide Availability of their Most Recent Kickstarter Success: Wally 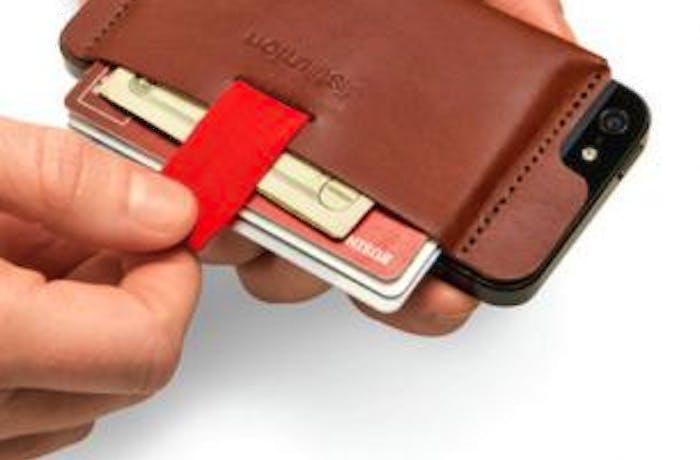 Charleston, SC, May 1, 2013: Distil Union announces the immediate and worldwide availability of their most recent Kickstarter success: Wally, The Stick-on Leather Wallet for iPhone.

In Distil Union's second successful crowd-funding campaign, Wally blasted beyond their Kickstarter goal within just four short days, ultimately raising over 700% of the goal. Since the close of the campaign in March, happy backers have received their Wally pledges ahead of schedule - a welcome surprise in the Kickstarter world. And now with Kickstarter complete and web pre-orders already fulfilled, Wally is available for purchase and ships worldwide.

**The Story of Wally
**It all began when the designers at Distil Union noticed a problem: "Grabbing a quick bite up the street, we found ourselves having to carry a bag or wallet when all we needed was our iPhone, debit card, ID and cash." said Nate Justiss, Industrial Designer at Distil Union. Dissatisfied with the bulky card-carrying cases out there, the team literally went back to the drawing board and created a revolutionary way to carry the essentials:

**Proudly unlike any iPhone wallet solution you've seen, **Wally is a handcrafted leather pocket that grabs directly onto the back of the iPhone (and most cases) to hold what you want, where you want it. What we especially love about it is that Wally doesn't broadcast to the world that he's a wallet! Instead of card slots that show off your contents, the discreet pull-tab provides access only when you need it. Your contents stay undercover until you pull the integrated ribbon and your cards peek out from Wally. Pushing on your cards retracts the ribbon. "People's faces light up when they see Wally in action. Remember pop-up books? It's the same sort of magic - but for us adults." explained Adam Printz, Distil Union's second Industrial Designer. This patent-pending design is a simple, clever solution to an everyday problem - which is what the Charleston-based team is all about.

Did somebody say Father's Day?! While wallets are a fairly predictable gift for Father's Day, there's nothing predictable about Wally. From the case-free design to the surprise pull-tab action, Wally never fails to impress. But wait, as they say, there's more: "Be sure to introduce your Dad to the Lemon App - I digitized the rest of my bulky wallet, so all I carry is my iPhone and Wally!" advises Justiss, a now-reformed Costanza-wallet offender. "We've had guys email us to say they haven't had any back pain since trading their fat back-pocket wallets for a slim Wally! It makes sense, Wally loves helping people." said Lindsay Windham, Creative Director at Distil Union.

Handcrafted from Italian leather that softens and develops a rich patina over time, Wally comes in either Ninja Black or Cowboy Brown for both iPhone 4/4S and iPhone 5, available exclusively from Distil Union for $49.99.

**What's a Distil Union? **Launched in 2012, Distil Union is a micro-collective of three designers with a combined 15 years of experience in the Apple accessories market. "Distil" references their philosophy of getting to the essence of a problem and solving it with design that's simply useful, attractive and considered. "Union" - that's easy, it's how they've joined together to have fun (and work hard) creating seamless solutions to real-life problems. Influencers worldwide, from Mashable.com to Esquire UK, have been talking about Distil Union's debut products, Snooze the iPhone alarm dock with slappable snooze bar and Weave the extra long fabric-covered cable. Now their latest creation, Wally the Stick-On Leather iPhone Wallet, promises to bring even more attention to the emergent Charleston tech scene.