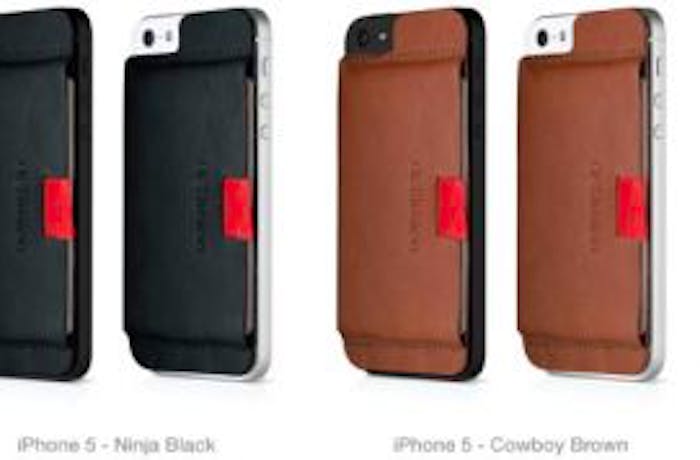 Meet Wally, the Super Slim and Subtle Leather Pocket that Clings the Back of Your iPhone to Secretly and Securely Hold Your Must-haves

Charleston, SC–February 19, 2013–Wally, the slim stick-on iPhone wallet from Distil Union, debuted on Kickstarter and reached full funding in less than four days. The handsome gadget now stands to raise over 700% of the original goal with only days remaining in the Kickstarter campaign.

Judging by the number of skinny wallets and iPhone wallets on the market, the team of designers at Distil Union identified a clear demand. "We were browsing cases at the Apple Store, searching for an iPhone wallet solution that WASN'T a case. When we didn't see one, we got to work designing our own" said Nate Justiss, Industrial Designer. After conducting material studies and concept testing, Wally was born.

Before Distil Union lauched the Wally Kickstarter, the designers asked friends to test prototypes in their daily lives. It wasn't surprising that carrying iPhone, cash, cards, camera all in one without having to compromise the slim design and elegance of the iPhone resonated with people. Wally has already proven himself to be the perfect mix of form and function, as the team's second industrial designer, Adam Printz, explained "People who see Wally have been saying 'Finally, THIS is EXACTLY what I've been looking for!' – which feels great because Wally's exactly what we were looking for, too! That's the essence of why we created Distil Union." Some of the real-world feedback, such as a more camera-friendly corner opening, have already been incorporated into the final design since the Kickstarter launched in early February.

**Wally's Hidden Talents. **Instead of yet another iPhone case, Wally's a true reinvention: Using micro-suction to grab onto the back of the iPhone, the Italian leather pocket holds what you want, right where you want it. This high-tech material is composed of thousands of tiny suction cups in a super thin layer that clings to slick surfaces – including many cases – and is removable and repositionable as needed. And now with the addition of the optional Alternahesive™ to the Kickstarter as an ambitious $75,000 Stretch Goal, Wally also becomes compatible with_even more _cases.

The real "wow factor" though when testing Wally prototypes with the public has been Wally's pull-tab action, which lifts the contents from within – "Faces light up when they pull on the ribbon and the cards appear! It's totally the same magic we felt when pulling on pop-up books as kids, except now we're pulling out our grown-up toys like debit cards or business cards" said Lindsay Windham, Graphic Designer. An unexpected treat: the ribbed grosgrain ribbon gives users surprisingly satisfying, tactile feedback. This patent-pending product is a simple, clever solution to an everyday problem – which is what Distil Union is all about.

The limited first-edition models of Wally are nearly sold out. Thanks to the quick success of the Kickstarter campaign, Distil Union have been able to offer a second run, now available for a $42 pre-order pledge. Handcrafted in the US from premium, vegetable-tanned Italian leather, Wally comes in either Ninja Black or Cowboy Brown for both iPhone 4/4S and iPhone 5. The Wally Kickstarter runs until March 1, at which point the retail price rises to $49.99 with an expected ship date of May 2013. In true Kickstarter fashion, being a backer is the only way to guarantee being among the first to experience Wally.

**About Distil Union
**Distil Union is a micro-collective of designers who are having fun (and working hard) creating desirable solutions to real-life problems. Drawing on their years of experience with brands such as Digital Lifestyle Outfitters and Philips Electronics, the team of designers has joined together on a mission to make life better with their own considered designs. Wally is their second successful Kickstarter, following close on the success of Snooze, the iPhone alarm dock with slappable snooze bar – now available on the Distil Union webstore.