SPARC Hackathon 2.0 Brings Together 28 Teams from Around the Southeast 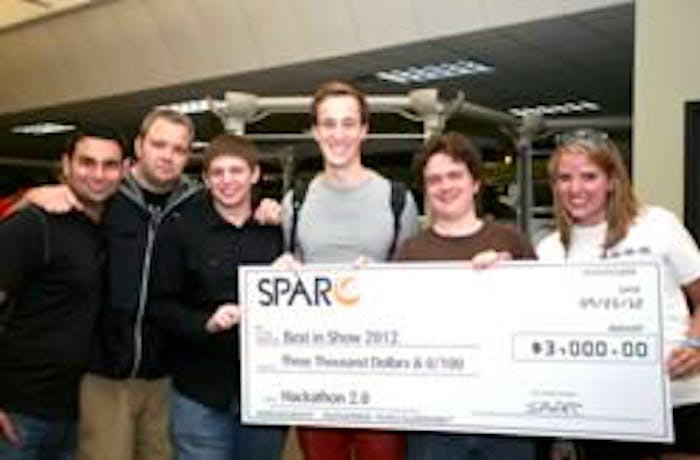 SPARC, a Best Place to Work winner, hosted its 2nd annual hackathon on August 25 at its Charleston headquarters. The 16-hour tech party brought together 28 teams from four states, and more than 800 spectators from around the country and from as far away as Texas. The winning team, Apperture Science from the University of South Carolina, won "Best in Show" and the $3000 grand prize with its Pocket Naturalist app.

A total of 28 teams entered Hackathon 2.0, which brought over 70 participants to the event from around the Southeast. After picking their spots in the Developer Pit, teams chose their category from a randomly generated list of 2-5 topics such as travel, kids, social media, shopping, etc. It's this spontaneous nature of Hackathon that makes the event so engaging to both participants and spectators.

After choosing the "Bartering/Haggling" category, The League of Pantless Gentlemen team began developing their app at 10 a.m. "Once we picked a topic, we spent the first hour just hanging out, talking, and putting together some ideas - which really helped us. Once we had that foundation, as the designer I was able to write down the blueprint of the user interface, and the engineers broke up the functionally and attacked it," said Matt Brooks, Hackathon 2.0 participant.

While each team built apps, the event buzzed with a live DJ, food truck rodeo, GameStop video game lounge, presentations, a jump castle, live band and open bar by Mix Bartending. The food, drinks, and fun went on all day, giving participants and spectators ample opportunities to not only enjoy the event, but learn what a Hackathon was all about.

After 11 hours of coding, the Build & Deploy team built the apps from the team repositories in GitHub and deployed them to Knappsack, a mobile application management platform. Apps with names like Tripppy, BarterBee, To-Do'ZZZ, PopDeals, PetNames, Lendable, and SitterLink were deployed to Knappsack and distributed to each device for presentation and judging. Beginning at 10 p.m., each team was given two minutes to present their app to the judges and crowd.

"It was amazing to finally see the ideas, the look & feel, and functionality of the applications. With twice as many competitors and three times as many spectators, the competition was fierce this year! The teams did an awesome job of completing well-rounded apps in such a high-pressure situation. A majority of the teams said they plan to continue developing their apps in the future, and many spectators said this was incentive enough to learn mobile app development themselves! It's inspiring to know that this event is a catalyst for such creativity and innovation here in Charleston," said Amanda Hodges, SPARC Software Engineer and Event Organizer.

Be sure to check out all the Hackathon photos to get the real flavor of the event, and visit http://www.sparcedge.com to learn more about SPARC in get info on next year's Hackathon.

**About SPARC **
SPARC provides software product development services and support with customers in the commercial, federal, and defense contracting industries. SPARC offers a broad range of solutions in order to enhance customer-focused results in an industry driven by state-of-the-art technology. We infuse our services with robust scientific methods, complemented by modular information management technologies. Check us out online at http://www.sparcedge.com.