Distil Union Create Life Solutions with a Sense of Humor 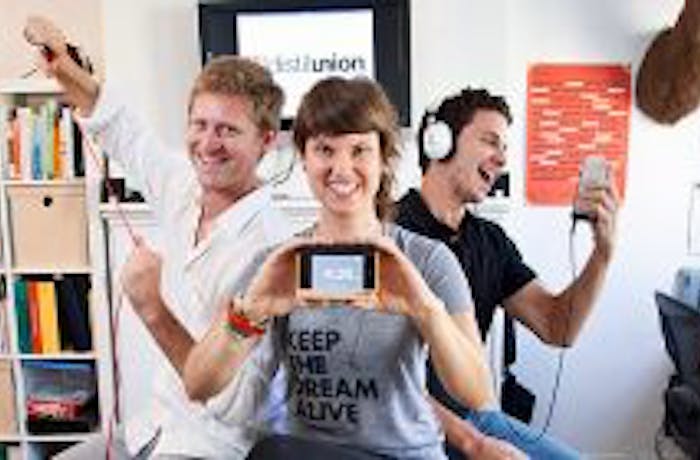 You Snooze, You Don?t Lose

While we can't say for sure, we bet Distil Union's Nate Justiss and Adam Printz are expert snoozers. The guys, who run the product design company with Lindsay Windham, work literally steps away from their beds, since the front room of the men's King Street apartment serves as their office space. "Part of our mission is to create products that make your life easier, particularly your life with your gadgets that you already have, you spend a lot of money on, but maybe they don't fit into your life 100 percent," Windham says. For their first major product as a cohesive company, Distil Union decided to start with everyone's first interaction of the day: The alarm clock. These guys all wake up to the sweet sounds of their iPhones, but it's never a satisfying experience trying to snooze, especially when you knock your expensive phone off a side table. And so Snooze, a stylish iPhone dock with a snooze button, was born. But Distil Union is much more than just one big button.

First thing's first. The three worked together on consumer electronics at Digital Lifestyle Outfitters, which was eventually bought by Philips Electronics. After moving out on their own, but missing each other professionally, they decided to form Distil Union to work on their own products. Justiss and Printz handle the product design –- Printz more on the business side while Justiss is in charge of the entire product design –- and Windham, a graphic designer, does packaging, marketing and PR, and manages the website. They've also got lives outside of the company: There's contract work, and Justiss and Printz consult, plus Justiss does marine design for Scout Boats. Windham has a studio at Redux and created the artwork for the recently released Shovels and Rope album O' Be Joyful.

Back to snooze. Now that they're no longer working for the mass market, Distil Union can have a little bit more fun. "[Snoozing] was an obvious area for us that needed a solution, and as our first product, I think Snooze has a sense of humor too," Windham says. After successfully raising more than $50,000 on their Kickstarter page, Snooze has moved into the manufacturing phase. "Part of the Kickstarter process was seeing if we had a good idea, seeing if we had a product people wanted to buy," Windham says. And they sold almost 1,000 Snoozes in 30 days. Obviously, people are into it.

Brand upon the brain. Justiss and Printz like to read up on other entrepreneurial spirits in Fast Company and_Inc._ Windham blogs, and all three subscribe to Fab, Uncovet, and other design lists, use websites like Svpply and Pinterest, and keep up-to-date on the tech, product, and design worlds with Gizmodo, Design Milk, and Yanko Design. An inspiration board of sorts is decorated with the logos of the brands Distil Union looks up to, from Apple, Ikea, and Volkswagen to local company Twelve South, which produces Mac products. "As part of building the foundation for Distil Union, we basically put together a company identity deck about building our brand and who we want to be, who we aspire to be, and what the language and tone and style our company is," Printz explains.

Block party. This team likes to celebrate the wins. A disco ball hangs from the ceiling, but it's not utilized as much as Distil Union thinks it should be. When Snooze hit its goal, they brought out the leftover party poppers from New Year's Eve and cracked open some beers. Then Windham slept for an entire weekend. Then they got back to work. The group also goes out for happy hours, meeting up with former colleagues and keeping their network strong. They're hoping to have a party on their patio for their Kickstarter customers once all the Snooze materials come in (the three are assembling the gadgets themselves in the office, since each takes only a couple of minutes).

To the core. "Product design is actually pretty rare here in Charleston," Justiss points out. "We don't have a lot of product designers to just hang out with." Their talent isn't just coming up with ideas, it's working to make something real, and that means dealing with manufacturers, factories, and vendors, and worrying about shipping and all the other logistics. Ideas are the easy part. Fortunately, it seems like Distil Union has plenty of those, and they're also here to help other people in town with their own projects, having recently joined and presented to the Charleston Digital Corridor. Justiss, Printz, and Windham are a little tight-lipped on what the future holds, but expect more life solutions –- and some that go beyond Apple.