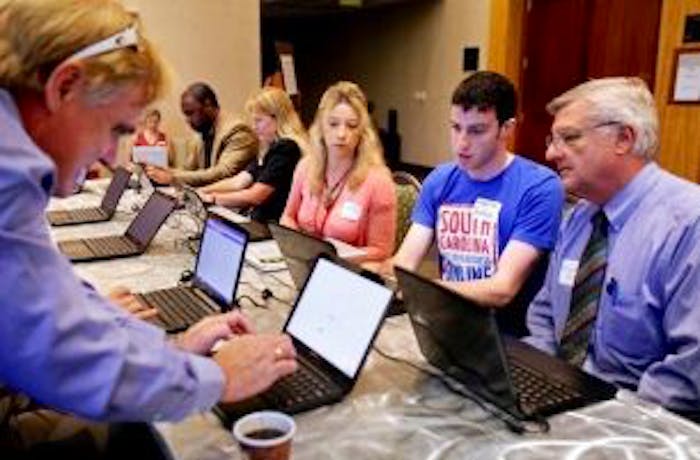 A small-business controller, a student babysitter and a priest walked into a ballroom.

It may sound like a joke, but that's what happened at the first-ever Googlefest, held Thursday morning at Trident Technical College in North Charleston.

The trio was among more than 300 South Carolinians, from the peninsula to the Upstate, who attended the free, all-day seminar on the Internet giant's tools for businesses, nonprofits and educators.

They heard about everything from the explosion of smartphones and online advertising to ways teachers can use YouTube videos in the classroom.

Rhonda Shubert, who manages the office at Atkins Machinery in Spartanburg, decided to make the trip this week after hearing about the event on the radio. She uses Google's search, maps and email applications but was curious about other "cloud" apps, such as Google Drive.

"I just thought, 'Well, technology is not one of my strong suits, so maybe I'll go and learn something,'" said Shubert, 57, said while sampling the refreshments between presentations.

It was the second time this year Google has taken up residence in a large Lowcountry event space to host a combination education-marketing event for new users of its suite of online products.

"South Carolina Get Your Business Online" drew more than 600 people to the Memminger Auditorium in downtown Charleston in February. But there was more demand, and Google wanted to reach other kinds of users, such as teachers.

Almost the same number of people signed up this go-round, but everyone past the first 350 was put on a waiting list, according to a Google spokeswoman. "Googlers" from the company's Berkeley County data center and out-of-state offices spoke on stage and offered one-on-one consultations at other points.

The presentations ranged from an often comedic routine about how technology is or should be changing teaching, learning and testing to a rather technical review of the evolution to cloud computing.

Morgan McCraw, a 20-year-old College of Charleston student, came to Googlefest to take notes for her out-of-town boss and babysitting client. She enjoyed a talk that noted how Justin Bieber rose to stardom through YouTube and how the Red Cross raised a fifth of its Haiti earthquake donations through text messages but found the data center discussion a bit dry.

"I kind of zoned out during the cloud part," she admitted.

Phil Lewis, a 56-year-old Anglican priest who is on sabbatical in the Lowcountry developing a technology toolkit for church leaders, was already quite familiar with all of the Google apps mentioned Thursday.

His mission now is to spread the Web 2.0 gospel, as it were. But he said it will be a while before each of his churches is sharing newsletters on Google Docs and posting youth group ice cream parties on YouTube.

"When I start talking cloud," he said, "people think I'm talking in tongues."