Geode: A Scout Ahead Of The Wireless Payments Revolution 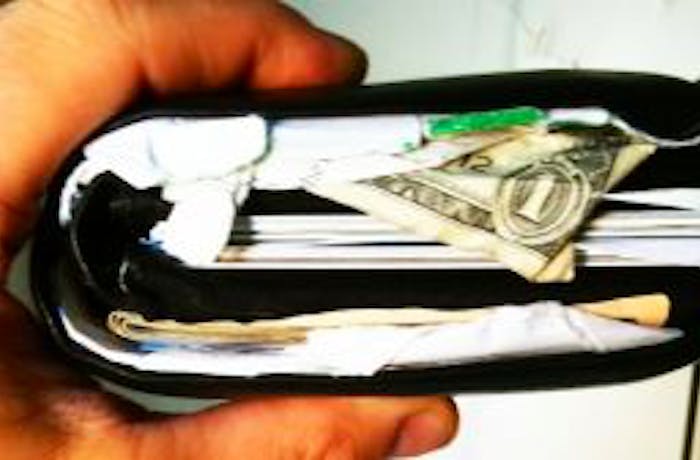 If you've ever looked at a bulging credit card wallet, jammed with plastic bearing bank logos, loyalty cards from three different coffee shops, and your supermarket customer card and thought "There's got to be a better solution to this" then you'll love the idea of Geode. It's a smart iPhone case that has its own screen and a magnetic card reader–swipe all your cards into its system and you don't need to carry that bulging wallet anymore.

Geode has a system that'll encode a magnetic card in real time–you hand it to the store, which swipes it in the usual way and you're on your way. Your barcode-based cards, like the sort supermarkets tend to use, are stored electronically too, but in this case their replicated code isn't transferred to a plastic card, but rather shown on an e-ink display on the Geode's case–which is laser-scannable in exactly the same way the "real" card is. For security the mag cards can be programmed to time out and become unreadable after a delay, and there's a fingerprint scanner to allow access to the protected data held inside.

It's darn clever, and though there are a few drawbacks (convincing a skeptical merchant that this new magical tech has just "printed out" a genuine, non-stolen and completely valid credit card, or that by scanning your phone they're doing the same as scanning their proprietary barcode) it's easy to see the system is better in many ways than a bunch of cards in a wallet.

It's also a little taster of the smartphone-centricmobile pay future that's just around the corner, because while the card tech the Geode "replicates" is very old-fashioned, the user upshot is the same: Digital access to a host of different cards is available in a single device. All it lacks is the future-payment system integration between paying for something by a credit card in a shop and simultaneously earning loyalty points or a discount at the same moment. And just like many forms of wireless future pay, it's also more secure than current tech where your cards aren't fingerprint-protected and don't "time out" if you drop them or have them stolen.

In this sense, PayPal's new widget (which, let's face it, is astonishingly similar to the pre-existing and highly popular Square system) is a similar taster of the future. It too relies very much on current-generation plastic card tech, but it does allow for completely mobile payments on the fly. And it will, PayPal says, soon bring some of the delightful integration between paying and loyalty that promises to be one of the best features of NFC payment tech.

But, like Geode, it's flawed: PayPal is desperate to crowbar its way into the future of mobile pay, and this Square-esque effort is the first step. But while it's technically a tiny fraction cheaper for merchants than Square is, it actually means that customer payments are corralled in your PayPal account rather than going directly to your bank as with Square. That means PayPal hangs on to your money for a while, until you manually have to do an additional step to move it to a bank. Plus PayPal hasn't got the best customer service record, and is infamous for zealously withholding access to customer money for "security" reasons that seem questionable. Of course, PayPal may choose to improve its customer image dramatically, but there's still that extra step to access your cash.

But let's not be too harsh. The mobile payment revolution isn't going to happen overnight, and before it does there's plenty of space for experiments like these two to flourish and give us all a taster of the good stuff that's about to come.