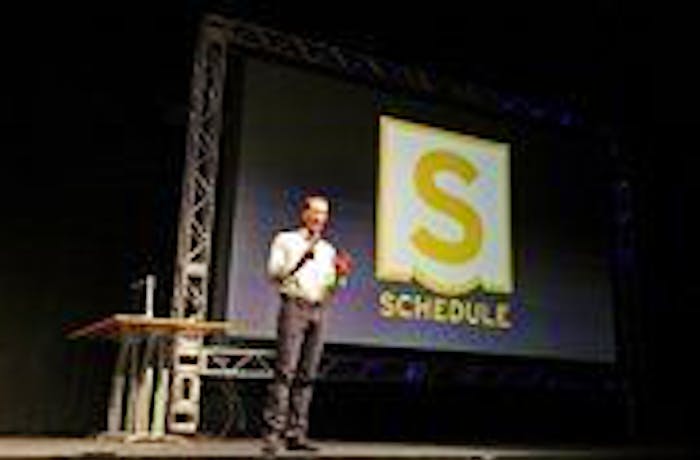 At exactly 11 a.m., PeopleMatter CEO Nate DaPore, dressed in what he might call "Charleston casual," strode on stage to applause and jangling branded cowbells.

The crowd – PeopleMatter employees wearing T-shirts with such statements as "Paper is so 2011," out-of-state customers and analysts, a hodgepodge of curious locals, and perhaps hundreds more watching the live webcast – was now at attention.

After adjusting to the bright spotlight and glancing down at a screen in the orchestra pit for guidance, DaPore launched into the kind of presentation that Steve Jobs made famous at Apple.

Over the next hour, there were video and live customer testimonials and a live demonstration of PeopleMatter's latest hourly worker-management software, Schedule.

DaPore, a gregarious Charleston native, even had a conversation with Schedule's Siri-like personal assistant, "D," in which he verified and manipulated his upcoming shifts at the fictional McMarket East. More cowbells.

"I didn't know an HR conference could be so fun," Scott Wise, whose eponymous chain of taverns in Indiana uses PeopleMatter's platform, quipped.

Though familiar to aficionados of larger West Coast computer companies, the image of a software executive in casual clothes delivering a multimedia presentation-cum-webcast from a fancy venue is relatively new to Charleston.

"They're definitely taking their cue from the bigger companies. You know Microsoft and Apple have been doing it since the late '90s and the early 2000s," said Thornhill, who also has produced Boeing events and CNN presidential debates.

Local tech firms' light and sound shows aren't quite the multimillion-dollar affairs that come out of the San Francisco or Seattle areas, but they're "getting bigger, they're getting better production values," according to Thornhill.

The events are another indication of the broader maturation of Charleston's technology economy, local tech industry observers said.

Blackbaud, for example, was 43 people when it moved south from New York in 1989; now it's a public company with more than 2,200 employees. Smaller firms, like Fanzter, have transferred operations to Charleston, and many others, like Blackbaud's Daniel Island neighbor Benefitfocus, started in the Lowcountry.

"There is talent here, and people will come here," said Peter Lucash, CEO of Digital CPE and author of the biweekly Business Indigo newsletter. "You've got a nice place to live, you've got recreation ... the business climate is pretty easy."

Lucash said only bigger companies with broadly appealing products seem to have these sorts of events. "So that's what you're seeing – companies that have that sort of presence and that sort of market," he said.

PeopleMatter held its first product launch at the Sottile in September 2010. Benefitfocus, where DaPore was once vice president of enterprise sales, puts on similar shows.

In September, Benefitfocus hosted Prevue, an evening affair at the Hippodrome Theater where CEO Shawn Jenkins, sporting jeans and a button-down shirt, paced beneath a huge screen as he reviewed company news, chatted with satisfied customers and received cowbell applause.

Events like Prevue evolved from years of on-site customer events, according to Benefitfocus spokeswoman Kate Lewis, which "due to capacity" went searching for proper performance venues.

Blackbaud outgrew the Charleston area entirely, moving its annual conference, BBCon, in 2010 to a meeting complex near Washington, D.C. Otherwise, Blackbaud tends to unveil products and updates at trade shows, according to spokeswoman Melanie Mathos. "We try not to go too overboard with product launches," she said.

Staging these polished public events is a major undertaking, involving months of planning, extensive coordination and lots of money. PDA typically deploys six to 15 people with three to seven cameras, and just the audio/visual bill "can range anywhere from $10,000 to a couple million, according to what world you live in," Thornhill said.

At PeopleMatter's event this week, for example, there were at least four black-clad cameramen, including one who recorded over DaPore's shoulder as he demonstrated Schedule on his iPhone. Charleston police officers provided security.

Standing in an aisle as technicians broke down the set, PeopleMatter spokeswoman Joy Capps juggled a reporter's questions with phone calls about the multi-day event she was coordinating. "It's all blurring," Capps admitted.

She would not reveal how much PeopleMatter's events cost. Lewis was more forthcoming about Benefitfocus's One Place event on April 25. "This year's event, it'll be a million-dollar event," Lewis said. And it's worth it, she said, for the customers.

Amy Whicker isn't quite a customer – she teaches in the computer and information science program at ECPI University in North Charleston – but she left Tuesday's launch suitably impressed. She called the "D" voice-recognition feature "pretty innovative," and said the stage demos and conversations brought the products into her hands.

"You see the testimony from people who use it, and you see how you could incorporate it in your own place," Whicker said. And that's to say nothing of the cowbells.