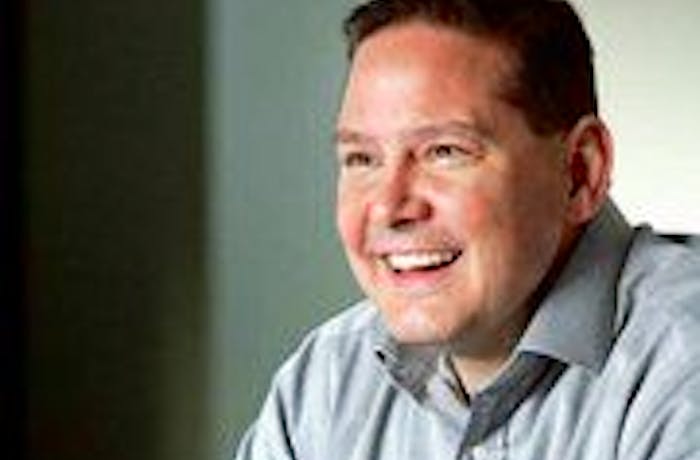 John E. Smith's missionary zeal for company culture is stated plainly on his business card: Chief Evangelist. Smith is a Sunday school teacher, but that's not what this is about. Smith's cause for the past several years has been improving the office "ecosystem" and making it as creative, productive and, yes, fun, as possible.

"It's my belief that the culture is the most important thing," Smith, 41, said at the Charleston headquarters of SPARC, the government contractor that has served as the laboratory for his workplace philosophies for nearly two years.

Smith, an otherwise low-profile father of two and recent exercise enthusiast, has come to this conclusion after two decades in leadership roles in the software business at big companies such as General Electric but mainly at smaller start-ups.

Smith's ideas about how companies should operate are legion, and he almost reflexively quotes workplace management theory (50 percent of recognition should come from a direct manager), statistics (engaged employees are six times more productive) and buzzwords ("interpersonal mush") drawn from his reading and experience.

But if one thing unifies all the culture concepts, it's that happy workers are productive workers, and, therefore, investment in culture is one in a company's long-term bottom line. "If that means at a white table, you should do that," Smith said, referring to the plain folding tables that sit in open spaces around SPARC's Clements Ferry Road office and serve as communal meeting and coding hubs.

Culture creature
SPARC, which has an unlimited vacation policy after the first year, requires its employees to work from home one day a month. It's part of the company's emphasis on mobile and "agile" and what Smith calls "One Life," for the healthy integration of the job and life.

The software firm's programmers can choose their preferred brand of laptop as well as their own toys, such as the ladder golf and water guns that sit around the office. "We truly do believe our people are our biggest assets, and what we want to do is support that asset as much as possible," said Smith, whose other title is co-chief technology officer.

That might sound like newfangled management mumbo jumbo to some, but Smith is emulating tech giants such as Zappos and Google. And Smith's peers in the Charleston tech scene, including Benefitfocus CEO Shawn Jenkins, say this culture warrior is the real deal.

Jenkins, who considers Smith "a good friend," called Smith "consummate Type A" with the kind of intelligence and intensity that draws some in and loses others.

"If he's involved, things are going to move and be active and get done," said Jenkins, whose software company bought one of Smith's companies in 2003 and turned it into the larger software firm's Greenville office. "The key is finding the right environment where he can bundle all that."

It took some wending, and it didn't look likely even two years ago, much less 20 years ago, but at SPARC, it seems Smith has found a company where he can "apply culture" and, just this month, launch what may become a signature product to match.

Secret sauce
A Cleveland native, Smith started his first business while studying at Kent State. He sold his second venture, a software consulting firm called Datazign, to Benefitfocus and moved from Greenville to Charleston.

The primacy of culture began to dawn on him while at Benefitfocus, where he was vice president of engineering and named one of the top 25 chief technology officers in the country by InfoWorld magazine in 2006. But it wasn't until he was at GE working on a major piece of procurement software that it became clear just how critical a vibrant work culture was.

What had been a low-synergy unit came to life when a co-worker started sending out birthday messages and other special occasion emails. "It's hard to tell, but at some point, that team started working together and they started to trust each other and the team started operating in a much more efficient manner," Smith recalled.

"I thought, 'This is the thing that everyone's missing,' " he said. "And if you could do it through email, why isn't there some better system to do it?"

With that in mind, Smith became CEO of Acadia Human Capital Solutions, a Columbia firm that specialized in human resources software. He then brought on another former BenefitFocus executive, Nate DaPore, and with an infusion of venture capital, the duo bought Acadia and moved it to Charleston as PeopleMatter. The arrangement didn't last a year.

"Nate and I couldn't see eye to eye, and I left that organization," Smith said, declining to elaborate. DaPore, through a PeopleMatter spokeswoman, declined to be interviewed.

In moving on, Smith got in touch with other technologists in town, including a software developer he'd hired while at BenefitFocus, Eric Bowman.

Bowman, who had started SPARC around the same time Smith joined Acadia, asked his mentor to join the new venture. Smith was hesitant, but Bowman won him over by agreeing to a few key stipulations. "I get to set the culture" was Smith's first demand.

New platform
That was in the spring of 2010, and Smith was SPARC's sixth employee. The business has taken off. According to Bowman, the company doubled in size and revenue every quarter from August 2009 through July 2011. That pace has slackened somewhat, but Bowman said revenues continue to grow, the head count now exceeds 150, and there are no plans to slow down anytime soon.

Only three people have left SPARC since it started, according to Bowman, and one of those returned after six months. In October, the S.C. Chamber of Commerce named SPARC the best small-medium place to work.

"It seems like everybody I talk to is happy there," Allen said. "We've never received anybody wanting to leave SPARC in our resumes."

As the evangelist approaches his second year with the company, much longer than he told Bowman he'd stay, SPARC is rolling out a platform that harks back to Smith's aha moment at GE and his ambitions at PeopleMatter.

SPARCet, the first of the applications, is a message system for co-workers to publicly praise each other. Initially an internal recognition app, SPARCet was released to other companies and organizations earlier this month and will be followed by additional planks of SPARC's employee engagement platform later this year.

A creative culture is critical to the success of not just in tech and not just the Lowcountry, Smith says.

"If you look at what America is still awesome at, it's innovation," he said. "And if we can engage the people, and those people can innovate the way Americans can, then India, all those guys, still can't compete with us. And that's the way we get America back on top."