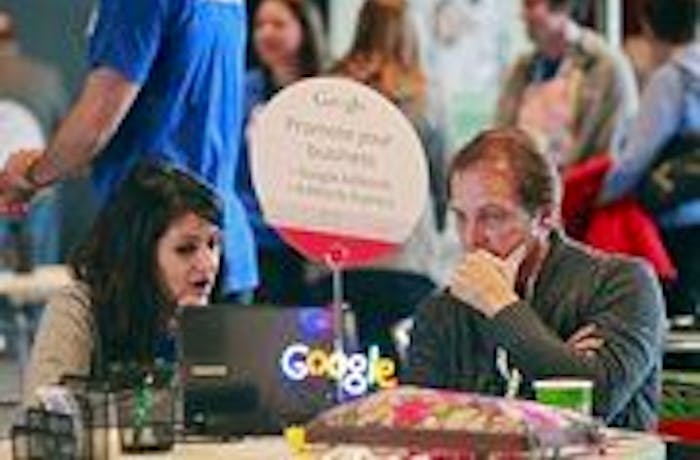 Marc Leon-Baumann has a "big thought," to launch a teen cosmetics line with his 16-year-old daughter, Sephora.

And he has labs in France working on products, and people on this side of the Atlantic working on other aspects of the business. But to make it all worth it, Baumann is eventually going to need customers.

Google advertising associate Sherry Almasi worked with business owner Marc Leon-Baumann on Tuesday, advising him on various online devices he and his daughter can use to launch a teen cosmetics line.

To that end, the 55-year-old French Canadian woke up at 3 a.m. Tuesday and drove from Greenville to Charleston, arriving at Memminger Auditorium at 7:34 a.m. to be among the first in the door at "Get Your Business Online," a Google-sponsored tutorial for people like him.

By mid-morning, Baumann spiritedly recalled all he had learned so far and how it would propel his nascent family company forward.

"With Google, we are finalizing the business plan," Baumann said. "I can better now figure my advertising budget."

Baumann was one of about 600 small-business owners who attended the all-day event Tuesday. In addition to the roughly 500 who pre-registered, there were another 100 walk-ins, according to a Google spokeswoman, an impressive turnout for the South Carolina version of a series that began in Texas last July.

They learned to build simple websites, which will be paid for by Google over the next year, and about the Internet giant's online marketing tools. Attendees received additional counsel during one-on-one sessions with Google employees who had traveled from as far away as Google's headquarters in Mountain View, Calif.

Michael Wyszomierski, a Google search quality project manager, said he had spoken with a person with a candle business, a Web developer, a fitness instructor and "two ladies that sell hats." He said they all wanted "tips on how can I show up when people are searching for my business."

"The basic goal here is to help businesses learn how to operate their businesses online," said John Ploumitsakos, Google's director of small business outreach, as he walked around the Google-branded venue.

A huge red marker, like those seen on Google Maps, stood outside the site at 56 Beaufain St. near a series of Google-colored traffic cones and bikes. Inside, there were Google-colored gummi bears and little neon lights that spelled out the company's name.

U.S. Sen. Jim DeMint and U.S. Rep. Tim Scott of South Carolina were among those who stopped by.

"This is a way for small businesses to create a level playing field with large businesses," said DeMint, who ran a small marketing research firm before being elected to Congress. "If you're not on the Internet today, especially as a small business, you're missing a large part of your market."

Janie Berks, who sells Scentsy-brand wickless candles, aimed to close that very gap, driving in from Irmo, north of Columbia, Tuesday morning. Berks, 60, had the look of a satisfied customer as she walked out shortly before noon.

She left with a new website –- wearewickless.com –- and plans to advertise through Google AdWords. Berks said, like the experts she deals with in her other job as a paralegal, she really needed her Google tutors to explain things to her as if she were a sixth-grader.

"And they did that," she said.