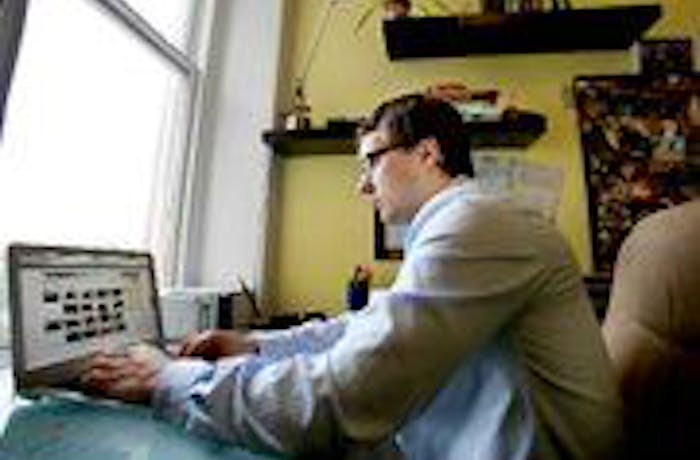 It dawned on them while floating in the Pacific Ocean.

Jeff Lucas and Tom Houge were on their way home from Asia last spring after circumnavigating the globe with the Semester at Sea study abroad program when they got to talking about all the language and culture barriers they'd faced over the past three months.

Between ports of call, Lucas said they would cram basic vocabulary "so we could get by and find the bathroom" in each new city. When they alighted, however, the locals invariably wanted to test their English on the Americans. The conversations weren't seamless but they made an impression on the pair.

Jeff Lucas, a recent graduate of the College of Charleston, is the founder and CEO of Fipeo, a new video social networking site that launches today.

Fipeo.com, the video social networking website they went on to found, stemmed from that desire to bridge such gaps between people and make more cross-cultural connections possible, said Lucas, the start-up's chief executive officer.

"We figured you can apply the same concept to a lot of things. It could be of huge value to be face-to-face with that perfect person," said the 22-year-old College of Charleston graduate. Conceived on the ship, the MV Explorer, just nine months ago, Fipeo, short for Find People, officially goes live today.

People with a purpose, such as learning a new language, moving to a new place, meeting a fellow hobbyist, etc., record a video message of what they're after and upload it to Fipeo.com.

People with complementary interests find that video and respond in kind. Connection are formed and the new acquaintances carry on the relationship.

"The reason why we incorporated the video is to make that initial interaction acceptable," Lucas explained. By keeping the back-end personal profile information hidden from users, Fipeo allows the first encounter to be less "creepy" than those on other social networks, where birthdays and vacation photos are freely published, according to Lucas.

"That is the bread and butter of meeting someone new," Lucas said. "That's what's going to break down the wall that previous social networks erected."

The Web 2.0 space is crowded, even within the video-only networking category. There's VYou.com, Chatroulette.com, Rounds.com and Tout.com, just to name a few, Lucas said.

There's also UrVew.com, launched by Charleston native Tracey Quarles last May. And then there's Airtime, the video social network that billionaire tech entrepreneur Sean Parker, of Napster and Facebook fame, is rumored to be developing. "He's a wildcard," Lucas said. But Lucas believes Fipeo has a niche. And he's not the only one.

Jerry Callahan, who co-founded popular propane tank exchange company Blue Rhino, has been mentoring Lucas since September as part of the College of Charleston School of Business's Schottland Scholars program.

"He's a really bright kid with a really good business background," Callahan said. "A lot of people have great ideas but don't have any business experience."

Speaking by phone from the Dominican Republic last week, the Sullivan's Island resident said he has advised Lucas on everything from fundraising to business planning to hiring staff and that the young entrepreneur has soaked up the guidance "like a sponge." Though Callahan's background is in manufacturing and distribution, he said he was "quite intrigued" by Fipeo.

"I think it's got a lot of legs in social networking," he said.

**Sprint to finish
**
After Lucas and Houge returned to dry land last spring, they wasted no time getting to work, moving to Houge's home state of Maine for the summer to refine their idea and fundraising pitch.

Lucas and Houge, a 21-year-old University of Miami graduate, presented Fipeo around New York for a month before securing $50,000 from an insurance executive there to build the site.

Over the course of the fall, the pair, who were finishing college, and Lucas' two older brothers, whose day jobs are at Apple and ETrade in California, constructed the site. They outsourced some of the coding to an Indian firm, Viscus Infotech, "just to get as many people on it as quickly as possible," Lucas said.

The response to the beta version of the site has been positive, according to Lucas. A "few thousand" people from 90 countries have signed up already. Now, Lucas and his team are focused on debugging the site, developing their mobile applications and planning ahead. They're courting venture capital and evaluating where the company's office should be.

Last week, the Fipeo team had a conference call with Plug and Play Tech Center, a Silicon Valley incubator, about possible funding, Lucas said. Houge, president and chairman of Fipeo, was in Maine last week seeking a "bridge round" of funding.

Lucas has mainly been operating out of his apartment overlooking Marion Square, but his lease is up in May. And despite offers of office space and maybe more seed money from the Charleston Digital Corridor's Ernest Andrade, he said it's more likely he'll be moving to New York, Boston or San Francisco. For all of Charleston's recent progress, Lucas said, its "downsides are still glaring a bit."

"If we could stay here and base out of here, I would be ecstatic," he said. "But there's the issue of finding developers who are willing to work at a start-up."

"Most technically oriented people in the Charleston area came here for some of the larger companies like Benefitfocus or Blackbaud, so they're looking for that salary, and that 401k and those health benefits, and that's just not something we can offer right out of the gate," he continued. "We just don't know if there's enough of a start-up culture."

He also worries about the availability of funding for young tech companies, saying "most financial institutions around here, they're very traditional, and tech companies are not."

Andrade, who first met Lucas when he visited the city's Flagship tech incubator as a College of Charleston Aiken Fellow, "would not disagree" that there are more mature tech ecosystems in the Northeast and on the West Coast. But he wants Lucas to know Charleston would love him to stay and grow Fipeo here.

"From where we sit today, we have and can bring to bear all the elements that a company needs to succeed here in this community," the CDC director said.

At Andrade's invitation, Lucas recently began working at one of the city incubator's touch-down desks. Whether that convinces him to stay or leave remains to be seen.

"I suspect we'll be making some key decisions here in the next couple of weeks," Lucas said.

College of Charleston Assistant Professor Carrie Messal, who taught Lucas as a sophomore in her Management 301: Management and Organizational Behavior class, said she doesn't know enough about the social networking business to predict certain success for Fipeo.

But don't bet against Lucas, she said. "He's a good jockey to have on the racecourse," Messal said. "My confidence lies in Jeff."