Blackbaud, Small Firms Attract Local Tech Talent, Even From Each Other 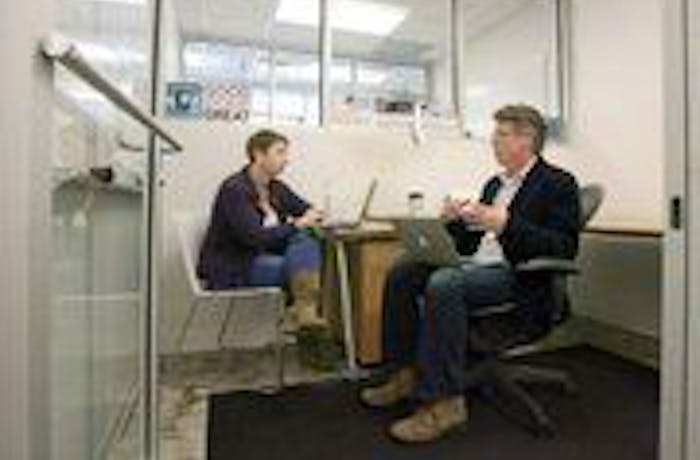 A Georgia-born Army brat, Earl Bridges got his education at the University of South Carolina before returning to his roots, working for Michelin around the world. Good Done Great Executive VP Earl Bridges works with employee Violet Meyer, an implementation specialist, in the company's small office at the Flagship Building on East Bay Street.

He got into the technology side of the business and in 1999, made his way to Blackbaud, the Daniel Island company that sells its software to nonprofit groups worldwide. Bridges left after four years to move west, but soon returned to Charleston, and in 2008, he went full time with a former co-worker's new venture, Good Done Great, a grant-management software development firm.

This month, he moved into the company's first nonhome office in the city of Charleston's Flagship tech incubator.

"You've got a lot of ideas about things that are not being served," Bridges, who is Good Done Great's executive vice president, said of his mindset while at Blackbaud. "You just think, 'Gosh, there's a ton of opportunity there.' "

But it's no coincidence Bridges is setting up shop not far from his old stomping grounds at Blackbaud's headquarters. Good Done Great partners with Blackbaud on projects and has its eyes on the bigger company's erstwhile employees.

In between conducting job interviews last week, Bridges said his first question on reviewing a resume is whether the applicant has worked at a name-brand company. "The second question is how long were they at Blackbaud and why did they leave?" he said.

Bridges' journey provides, in many ways, a representative window into the Blackbaud experience and beyond that, the current state of the Charleston tech scene.

**Growing Pipeline
**Christopher Starr, chairman of the computer science department at the College of Charleston, remembers the days before Blackbaud. At the beginning of his 25-year career at the college, most of his graduates left town for jobs.

Since 2006, enrollment in his program has more than tripled, and of last May's graduating class, 84 percent of his students have remained in the area. Now the net flow of new talent seems to be in rather than out. "This indicates to us a growing ability to develop a sustainable talent pipeline in the Charleston community," Starr said.

Blackbaud, a tiny outfit when it moved South from New York in 1989, played a major role in spurring that transformation over the past couple of decades. BenefitFocus, the second-largest software firm in the Lowcountry, formed in 2000, and since, especially the past couple of years, the Charleston tech community has grown rapidly.

The Charleston-North Charleston area was ranked 16th nationally in high-tech output over the past five years by a Milken Institute report published last month. And according to the Charleston Digital Corridor's 2011 annual report, computer-related jobs grew by 143 percent in 2011, up to more than 5,500, and experienced 59 percent wage growth.

Even in a sluggish overall economy, almost every computer company around is hiring. On Thursday, the Charleston Digital Corridor's online talent portal listed more than 200 openings, including 72 at Blackbaud and 36 at BenefitFocus.

Despite the relatively high wages paid and quality of life in the Charleston region, many in the tech community have noted a national shortage of talent that is especially severe here.

Blackbaud has a national recruiting program to attract top engineers and programmers, both out of college and from other companies, to Charleston. "They recruit heavily here," said Kevin Hewerdine, director of career services and corporate relations at Rose-Hulman Institute of Technology in Terre Haute, Ind.

For the past couple of years, Blackbaud has taken on two or three graduates of the prestigious school, where nearly every graduate has several job offers and where Blackbaud must compete with industry heavyweights such as Microsoft and Google.

Peggy Frazier, director of global talent acquisition at Blackbaud, sends her team far afield because she could not hire "volume" locally from the College of Charleston and The Citadel. "But there are still really good students there," she said. "We kind of go in and handpick the top ones to bring them in."

**Culture factor
**BenefitFocus, also based on Daniel Island, has a more regional recruiting program but also brings people in from around the country.

Representatives from other Charleston-based companies, such as human resources software developer PeopleMatter, whose CEO used to work at BenefitFocus and whose chief operating officer is a Blackbaud alumnus, were at a Clemson University job fair last week.

Charleston's smaller companies might not have the recruiting and relocation budget Blackbaud has, but between social networking and other perks, they are able to attract candidates, oftentimes from Blackbaud.

Just ask Bridges, or Tim Wolf, who came to Charleston from Wyoming in 2004 to work for Blackbaud, but left the company in October 2010 for "culture" reasons and now is a spirited ambassador for his new company,BoomTown.

It was tough to leave, Wolf said last week, as he was "set" at Blackbaud. But his priorities changed. In the past two years, a dozen people have followed him to BoomTown's fast-growing operation on Rutledge Avenue. Wolf stressed that he is "not a poacher."

Ernest Andrade, director of the Charleston Digital Corridor, said many people who work in the technology industry "are reasonably creative individuals."

"The culture of the work environment is really highly rated by them, not just compensation. ... It's almost becoming the primary reason," he said last week.

**'Bring 'em'
**Speaking earlier this month in her top-floor corner office, Blackbaud Senior Vice President Jana Eggers, who came from a competitive tech environment in Boston to Blackbaud in late 2010, didn't seem too concerned about "poaching."

She said employees rank their team of co-workers among their favorite aspects of working at the company.

Wearing a shirt from one of her former companies that said "Failure is impossible," she called the attrition "natural," and said the company aims to nurture an ecosystem of partners that includes local small shops like O-matic Software and Electric Plum, both led by former Blackbaud employees.

Chris Clark, product manager for Internet solutions at Blackbaud, was recruited out of Vanderbilt University four and a half years ago and remains quite content. "But we definitely started to see a little bit more tech-talent trading with other companies in the area," he said, referring specifically to BoomTown, PeopleMatter and defense contractor SPARC. "I think all three of those literally didn't exist five years ago. And they employ maybe 120 engineers between the three of them."

Asked whether culture, a commonly mentioned factor, has something to do with movements to smaller, younger companies, Clark said, "I think there's some of that." "There are definitely people career-wise who like to be in smaller companies or larger companies," he said.

Eggers laughed when she heard Blackbaud had been referred to within the local industry as "the Ellis Island" for tech workers. "I think Ellis Island is fine, although I think you know it's a little shorter timeline than we would expect, right?" she said, calling Blackbaud "a great place (to work) at any stage of your career. "Certainly, there's not a lot of these start-ups that will ever reach the scale that we're at," Eggers said.

Everyone seems to agree that more successful tech companies are good for everyone because people will be less hesitant to move here. There also will be increasing collaboration and cross-pollination. "I see no downsides," Eggers said. "Bring 'em."

In addition to hiring, Blackbaud recently announced a huge acquisition, Austin-based rival Convio, for $275 million. The company has made acquisitions before, including Bridges' former employer, Kintera, but nothing on the scale of Convio.

Bridges said such developments make him think about filling in the gaps between the bigger companies in the short term and maybe something bigger in the long term.

"I think there's no end to the opportunities out there," he said. "At the end, who knows, Good Done Great could be an acquisition for Blackbaud."

Editorial Note: All the companies referenced in this news report are members of the Charleston Digital Corridor.